War and Liberty - The Enemy Within

Today, when people talk about winning World War II, they often talk about freedom defeating tyranny. That is mostly true as the United States, the UK, Canada and Australia were indeed democracies. But it was not tyranny we went to war against. Indeed one of the powers that helped defeat Hitler was itself a dictatorship that only declared war on Hitler after having been invaded.

Adolph Hitler didn’t suddenly become a dictator in 1939 or even 1941. He had been a dictator for years before war broke out. While he didn’t start out as such, soon after getting power legitimately in January of 1933, he became one. Mussolini similarly became dictator three years after coming to power legally in 1922. At the same time, in Japan Emperors had ruled without opposition for more than two generations. Dictatorship, as unseemly as it might be, is rarely a reason to go to war – however it can be a great motivator once war is declared.

We also hear people talk about WW II as a fight against evil. Again, while true, we did not go to war against evil. The Nazi’s came to power on a platform imbued with anti-Semitism and for most of the 30’s they were engaged in marginalizing, quarantining and murdering Jews and others who didn’t fit the profile of their superior Aryan “race”. In Asia the Japanese had been massacring Chinese for years, and in one of the most horrific events in modern history, they raped, mutilated and murdered hundreds of thousands of Chinese men, women and children in Nanking in 1937.

Why does any of this matter? Because freedom matters. Because understanding that freedom’s not just preserved simply by defeating an enemy on the battlefield matters. While the Axis was indeed a threat to American liberty, German and Japanese atrocities made it easy to rally support against them. Rallying support for freedom against an enemy is much easier if that enemy is a viscous, ruthless killing machine. It’s far more difficult if the enemy of freedom is someone who’s ostensibly trying to help.

And that’s what makes 2014 different from 1941, or 1944 when D Day was launched 70 years ago this past Friday. During WW II the enemies of freedom were tyrants doing despicable, abhorrent things, and doing them largely over there. Eventually they targeted the United States and we engaged. Today, while there are enemies of freedom who do despicable, horrific things largely over there, the biggest enemies of freedom are over here and appear far less menacing. Indeed they couch their tyranny in the paternal pleas for “fairness” or equity or protecting the children. It’s hard to raise an army people who claim to be trying to help. But make no mistake, they are just as dangerous in the long run. This battle will not be fought with guns and bombs and the enemies of freedom aren't nearly as easy to identify as those flying the swastika or Rising Sun flags.

For Barack Obama and the rest of the big government cabal – which includes many Republicans – nothing less than American freedom is the enemy: 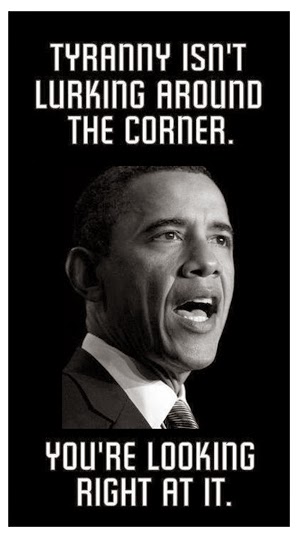 In substituting for Rush Limbaugh last week Mark Belling wondered if the United States today could rally a force to defeat… well, anything. That’s a good question because it appears to be the case that the nation that rallied itself to defeat the greatest menace in human history is unable to recognize the threat to liberty right in its midst. Seventy five years ago the German and the Japanese conduct made them an easy target against whom to focus American attention and energy. Today, after a half century of the cancer of big government liberalism crippling American prosperity and eviscerating American freedom, perhaps it will be its flowering in the person of Barack Obama that will finally bring about its downfall. The soft tyranny of liberalism may not be as easy to recognize as the tyranny practiced by our enemies in WW II, but it is no less important to defeat. I hope Mark Belling will soon find himself pleasantly surprised.
Posted by Imperfect America at 7:06 PM 1 comment:

Barack Obama, Free Speech and Operation Choke Point... you'd better watch out, you might be next!

The Constitution guarantees every American the Freedom of Speech. The very first Amendment to the document says “Congress shall make no law… abridging the freedom of speech…” Of course, what is speech that it needs such protection? Speech is more than just saying what’s on your mind, regardless of how profound or silly it is. Speech is communication. That’s the speech that needed protection and was incorporated into the First Amendment. It was the communication of thoughts and ideas that needed protection. Speech needed protection because of the impact it could have on others. Kings don’t like their authority questioned and a freedom of speech could potentially rile up his subjects.

It is that very reason that our Founding Fathers sought to protect speech: For the people to keep the government in check.

So now, today, we are all lucky enough to have that freedom. But it’s not literally the words coming out of your mouth that need the protection. After all, you could stand in your shower and say whatever you want and no king or president would likely care. No, it’s your ability to communicate ideas to others that is real value and has the power to effect change.

Knowing that communication was such a central element of the Freedom of Speech, how would you feel if the government used its various powers to say “We’re not going to try and stop you from speaking, however we are going to threaten anyone who listens to you.” You’d be dumbfounded to say the least – no pun intended. That doesn’t make a bit of sense and it’s likely unconstitutional as it puts a dagger into the very heart of what free speech is about. 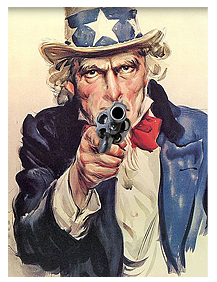 How do they accomplish that? By contacting the banks servicing those businesses and “encouraging” them to stop doing business with the frowned upon businesses. Although the businesses are perfectly legal, the banks, recognizing that the price for not adhering to those “suggestions” would be a regulatory nightmare from which they might not be able to survive, acquiesce.

The problem however is that the government doesn’t have the legal right to coerce businesses out of business arbitrarily just because they don’t like them. That’s the whole point of the Constitution in the first place, particularly the 10th Amendment: "The powers not delegated to the United States by the Constitution, nor prohibited by it to the States, are reserved to the States respectively, or to the people." Government can not legally rule by executive fiat. But somehow Barack Obama thinks he can.

Maybe you support what he’s doing. Maybe you’re against gun ownership or porn. The question becomes however, what about the next president? Maybe he’s against different things, even if they are legal. Let’s say Rick Santorum becomes the next president and decides to use the Treasury Department to force banks to stop servicing abortion clinics and their employees. The 21st Amendment repealed prohibition, but what if the next president felt that thousands of innocent deaths annually due to drunk driving was too many and decided to use the Department of Agriculture to outlaw the growing of hops, barley and grapes? What if the next president decides that unions are a threat to the nation’s prosperity and uses Homeland Security to, while in line with the 1st Amendment, allow them to meet, but to limit them meeting in spaces no larger than a Starbucks? What if the next president thinks electric cars require too many resources to manufacture so he uses the Energy Department to tamp down demand by having power companies shut off electricity to owners’ homes? Where does it stop?

The whole point of the Constitution and the rule of law is that citizens know the bounds of what is legal and what is not and understand where government action is appropriate. Those who operate within those bounds should be free from arbitrary government coercion. If “Operation Choke Point” is allowed to stand then it changes the United States from a nation (government) of laws to a nation of men. That’s a big problem, and not only because we have statists like Barack Obama and Eric Holder controlling the reins of power.  More importantly,  it undermines the very foundation of the nation. Once that which defines legal becomes a moving target based on who’s in power, then no one can be secure in their businesses, their homes or anywhere in their lives. One of two things follow: anarchy or tyranny. People will choose to either do what they want regardless of what the law says or they will do what they think the people in power want, regardless of what the law says. One or the other will prevail. Neither of which is fertile ground for freedom or prosperity for anybody other than those in power.
Posted by Imperfect America at 5:16 AM No comments: