I mention the fact that Barack Obama is black because for most of the eight years I’ve been writing I’ve been called racist. Never to my face, sometimes on Facebook and not infrequently in the larger sense as someone who supports the Constitution and advocates small government.

In all honesty I’ve probably lost half a dozen friends via Facebook over that exact point. These weren’t just “Facebook friends” but rather people I’ve known for years or even decades, people I’ve worked closely with and some with whom I’ve shared Christmas dinner. Each time it was over an issue that is near and dear to the left such as gay marriage, Barack Obama, Black Lives Matter or some similar issue.

In each case I tried to make my arguments focusing on the facts… slippery slopes, rates of unwed motherhood, government incompetence – such as with Solyndra - economics, etc. Each time while things might start out cordial enough, eventually, because I could not be swayed to my “friend’s” position I was called a racist, sexist, homophobe etc. I was suddenly labeled a hater of whatever group was impacted by the policy we might have been discussing, despite evidence to the contrary! The thing is, it didn’t seem to matter at all what I actually said, the words I actually wrote… if I didn’t agree with the other person’s point of view they seemed to have no problem slapping their label on me and feeling victorious.

It makes you think… if people I know well, people who’ve know me for years and worked with me and socialized with me can suddenly feel comfortable applying these labels to me – albeit on Facebook – because I’ve written about conservative, Constitutional positions – never, ever because of something I’ve actually ever said or done – what kind of debate is even possible? Particularly when some of the people I respect the most and quote most frequently are themselves black such as Thomas Sowell and Shelby Steele.

Now we have a white president… but apparently I’m still a racist. Even though there were LOTS of things about Donald Trump I disliked and wrote about, the fact that I actually voted for the guy makes me racist. Interestingly, had I voted for the other white person on the ticket I’d have apparently no longer been a racist…

The funny thing is, the fact that there were two white people to choose from actually drives home the fact that my vote didn’t have any more to do with race than it did when I voted against Barack Obama. I voted against Barack Obama and railed against his policies for eight years not because he’s black, but because he’s a statist. Coincidentally, I voted against Hillary Clinton because she’s a statist. I opposed Barack Obama from day one because he is a progressive who seeks to diminish the United States on the world stage and destroy capitalism and eviscerate freedom. Coincidentally I opposed Hillary Clinton because she is a progressive who seeks to destroy capitalism and eviscerate freedom. Apparently, none of those things matter… once the left has decided their position they feel confident enough that they can label any dissenters as some version of “ist” with little regard for the actual facts.

Of course that’s the point… with the left, reality and facts rarely matter. Whether it’s the connection between unwed mothers and crime, or between a higher minimum wage and higher unemployment among the unskilled workers, or between increased regulation and lower GDP growth. the only important thing is what politicians say and who they offer the most goodies to, it’s never what actually happens. And it holds true not only in politics, but in real life as well. And sometimes it’s more than just losing a couple of friends. Remember a few years ago when the left wanted New York-Presbyterian Hospital to refuse a $100 million donation because it came from the Koch brothers?

Will we ever get back to a point where political discussions are separate from individual emotions and passions and we can focus on facts rather than name calling? With the media in general and social media in particular fanning the flames of narcissism, unwarranted self esteem and the primacy of the “right” to be free from offense over individual freedom and limited government, don’t expect a turnaround anytime soon. But at least with Trump there is a glimmer of hope. He may be a lot of things, but something he's not is a socialist who loves regulation and high taxes. Those three things alone will be a 180 degree change from what we’ve had for the last eight years. One wonders if the economy finally pulls itself out of the 1.5% malaise it’s been in since Barack Obama became president and starts to actually grow to its potential, how many of today’s lefties will start separating fact from fiction when they see incomes rising, opportunities increasing and having a bit extra in their pockets at the end of the month?  There may be hope... After all, Ronald Reagan who was much vilified by the left finished his second term with an approval rating of almost 65%.
Posted by Imperfect America at 2:34 AM No comments:

As we head into the end of the most heartbreaking presidential cycle in American history my guess is that we will be talking about “President Elect Trump” at the end of the week. Of course I say that having thought Mitt Romney was going to beat Barack Obama 4 years ago…

A President Trump will present the nation with a raft of challenges… The first is the hope that his thin skin and short temper or his mancrush on Vladimir Putin don’t get us into a war. Beyond that, there are countless other things we hope he gets right, such as the Supreme Court, actually building a wall and streamlining the tax code. I say hope because if Donald Trump has shown us one thing, it’s been that he’ll say whatever he thinks will get him what he wants, and that his words and his deeds are often different by galactic proportions.

But this piece isn’t about Donald Trump… This piece is about the so called “conservative media” such as Rush Limbaugh, Sean Hannity, Fox News, Drudge, etc. For decades we’ve listened to these people or outlets tell us that the mainstream media is nothing more than a mouthpiece for the Democrat party. They’ve shown us, time and time again the hypocrisy of the New York Times, CNBC, the AP, CBS and the rest. And they’ve largely been right. If it’s Scooter Libby being falsely accused of leaking secrets he’s enemy number 1, but if it’s Hillary Clinton leaving classified information on a deliberately unsecure server open to hacking, it’s nothing more than the Republicans trying to destroy a strong woman for a minor oversight. 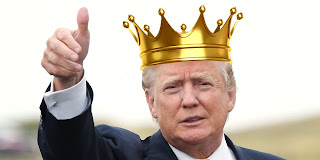 The question is, will the “conservative” media be half or even a quarter as objective when it comes to a President Trump? Frankly, I doubt it. Thus far, through the election cycle, Breitbart, Drudge, Rush and most of all Sean Hannity have been nothing more than bootlickers for Donald Trump. Can you imagine their response if Harry Reid had been caught on tape talking about grabbing women the way Donald Trump was? Can you imagine what their response would have been had Nancy Pelosi said that he could stand in the middle of the street and shoot someone and get away with it? What would their response be if Barack Obama had refused to release his tax returns or if the claims of charitable giving and the reality had been as different as it appears to be with Donald Trump? My guess is that the conservative media would have had a field day with all of that. But Donald Trump gets a pass on that and much more.

We already know that the mainstream media will vilify a President Trump at every turn. But that, frankly, is unimportant. Why? Because we already know that the mainstream media is indeed a Democrat tool, and, more importantly, their decades of hyperbole as it relates to Republicans have caused a significant segment of the population to simply tune them out. When the Democrat media painted Mitt Romney as a horrible human being who abused dogs and let family members of employees die, you knew they were utterly worthless. There were many things with which one could disagree with Romney on, but he is fundamentally a good man and most Americans recognize that. As such, when a mere four years later the media started to try and flail Donald Trump, who is much closer to actually being a vile human being, many people brushed it off as just more of the same.

With much of the public the mainstream media has zero credibility as a source of actual, factual news. Although a President Trump may give them much fodder to work with that is demonstrably true, like the boy who cried wolf, a significant portion of the population will dismiss it simply because of their long history of past cries. And so we are left with a conservative media to keep a President Trump and his ego in check. Two years ago I would have bet that it was possible to depend on Rush, Matt and Breitbart to keep an errant GOP president in check, but today I have grave doubts… and that’s a problem, particularly for a GOP president who has such a big ego, so few morals and almost no concept of limited government or understanding of the Constitution.

If the United States emerges from Donald Trump’s first – and likely only – term as a functioning republic, it will only be because somehow some conservative voice or voices decided that the Constitution was more important than being part of Team Trump and willingly stood up to the populist mob. The reality is, Donald Trump’s acceptance of the Constitution’s separation of powers, his fundamental understanding of the 10th Amendment and his dedication to individual liberty are no greater than Barack Obama’s are. But Barack Obama had conservatives who challenged his usurping of power, even if Congress and the Courts didn’t. Donald Trump will not have that thorn.

While it’s certain that the mainstream media will hold his feet to the fire, their credibility is gone. It will only be conservatives who point to the Constitution as the fount of – and yoke on – government power who will have the credibility to objectively challenge his actions. The behavior of the “conservative” media over the last year one does have inspire great confidence that they will challenge President Trump as he seeks to turn Washington into his personal fiefdom. But I'm open to being pleasantly surprised.  Let’s hope that somewhere there emerges a voice who will not fall under the spell of the next Narcissist in Chief when he succeeds our current one.  Maybe then the discussion can get back to limiting government to only those things it's actually empowered to do rather than the things that the strongman in the White House wants it to do.
Posted by Imperfect America at 7:19 AM No comments: