The Cabal That Cried Wolf and Undermined a Republic

Jussie Smollett, Crystal Magnum and Susan Smith are three names that at various times over the last 25 years have riveted America’s attention.  Smollett is a black man who lied about being attacked by two Trump supporting white racists in 2019.  Magnum is a black woman who lied about being raped by three white Duke Lacrosse players in 2006.  Smith is a white woman who killed her two boys in 1994 and blamed it on a fictional black carjacker.

While race was central to the first and incidental to the last two, as is with much news in America, the media focused on it extensively.  But race was not the issue that makes these three cases so despicable.  What makes them so heinous is that they sought to play upon the sympathies of the American public.  In the end they failed and all three ended up disgraced and Magnum and Smith ended up in jail.

From Al Sharpton & Tawana Brawley 30 years ago to countless hate crime hoaxes across the country today, the consequence of these hoaxes is that when exposed to enough of them, people become inured to the issue such that when real crimes take place, the victim’s stories are often given little credence or are outright rejected.

As despicable as these hoaxes are, they are simply individuals seeking to evade responsibility for their actions or attract attention, and largely don’t impact significant numbers of people beyond those targeted or involved. 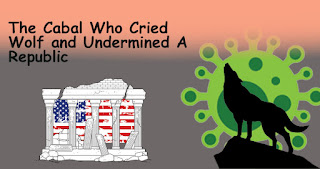 What is a much larger problem however is when such hoaxes are perpetrated by government.  And we’ve had a great deal of that.  Manmade environmental hoaxes have evolved from the Coming Ice Age to Acid Rain to Global Warming to Climate Change, with each one being manipulated to scare citizens and implement government policies and programs that never die, despite the fact that posited catastrophes never actually emerge.  Think about the “Peak oil” fears of the 70s and the ethanol programs we’re still stuck with today, despite the extraordinary increases in oil production and reserves.

Democrats have been manipulating Americans fears and goodwill for decades and today we are watching the culmination of that treachery.  It’s called Covid and it’s easily the greatest hoax ever perpetrated on the American people.

In reality, Covid is nothing more than a really bad case of the common cold.  Bad, certainly, but but basically the common cold nonetheless. From an epidemiology perspective that may not be completely accurate, but from a societal one it most certainly is.

Like the flu – which kills about 36,000 people annually, Covid is largely transmitted from one person to another via airborne particles.  Over the last 18 months 42 million Americans have gotten Covid and 682,000 Americans have died from it.  The former number is likely much higher – possibly over 100 million – and the latter number is likely much lower, with many of those reported as dying of Covid in reality dying with Covid.  Keep in mind of course that that’s 682,000 people in a country of 350 million, and 95% of the dead had on average 3 or more co-morbidities and the average age was almost 75.

A little more perspective:  Heart disease annually kills 650,000 Americans while cancer kills 600,000.  We spend $350 billion a year on heart disease and $158 billion on cancer.  That works out to be $538,000 spent per person who died of heart disease and $263,000 per person who died of cancer.  Covid is a bit different.  Through March of this year the US spent $13 trillion on Covid and will likely reach $20 trillion by the end of the year.  By the end of the year the death total “from” Covid will likely hit 800,000.  That works out to be approximately $25 million per death.

Now these numbers are not exactly apples to apples in that much of the heart disease and cancer money went to research that would not benefit the people who died, while ostensibly Covid dollars went to ameliorating the virus and its associated impact on the nation.  Then of course there’s the fact that heart disease and cancer aren’t contagious while Covid is. Finally, and perhaps most importantly, the survival rate from Covid is 99% or higher for men below 57 and women below 62 while the average 5 year survival rate from cancer is below 50%.

The point here is simply that while Covid is certainly a cause of concern, it’s nothing close to an existential threat to the nation. But one wouldn’t know that from listening to the Democrats, traditional media, big tech and the healthcare industry.  For purely political and control purposes, they have conspired against the American people to hide facts about potential treatments, lied at almost every turn and sought to harness the police power of government to control virtually every aspect of American life over the last 18 months. The results have been catastrophic, from a fraudulent election to millions of failed businesses to an array of restrictions and mandates that don’t even pretend to be Constitutional.

As bad as all the obvious negative outcomes from this unprecedented destruction of freedom and staggering amount of debt will bring about, possibly the worst part of the last 18 months (besides the deaths, obviously) is that the cabal has basically wrecked what little confidence Americans had in their government.  After being manipulated, persecuted, prosecuted and insulted for the better part of 18 months, how much confidence does the average American have in their government today?  Practically none. Actually, now that a Democrat is back in the White House Democrats have embraced their inner statists and their trust has ticked up while Republicans have the lowest trust level in Government since Barack Obama’s first term – and that was back in May, which seems a lifetime ago.

And that undermining of government could very well come back to bite Americans of all stripes.  What happens when we get a real existential threat from something as deadly as Ebola and as easily transmitted as the Delta variant?  Will Americans believe that their government has suddenly become honest and responsible?  Probably not, and their skepticism grows as they see more hypocrisy and are saddled with a growing array of mandates that are demonstrably ineffective or worse, dangerous.

The odds of a real virus borne existential threat are likely pretty low, but a visceral distrust in government is very much an existential threat to freedom and the Republic. Once before Americans were similarly distrustful of government and skeptical about its intentions and thirst for power.  The result was the Declaration of Independence.  I wonder what similar distrust in 2021 will engender...

Posted by Imperfect America at 2:59 AM No comments: