Economic Armageddon: How Many Lives is $10 Trillion Worth?

I heard or read somewhere this week someone ask what would someone think if they had fallen asleep in December 2019 and awoke today to discover that the United States and the world had willingly shut down almost its entire economic engine and “encouraged” or demanded that their citizens stay in their houses except for buying groceries or going to the hospital.  No gatherings of 500 or 200 or 50 or 10 people were allowed.  Apple had closed all of its stores outside of China, movie theaters were vacant, Disney World was closed and air travel had fallen off a cliff. The stock markets had collapsed by 1/3, Catholic churches around the world were cancelling masses during Lent, the Olympics, the NBA, NCAA, MLB, Nascar and the PGA all cancelled or postponed their seasons.  All in less than a month, in some cases just a couple of weeks.

This Rip Van Winkle would likely have expressed disbelief and posited that other than an alien invasion or world war, only a contagion could have brought this about.

Winkle:  “How many millions or billions of people had it killed?  25% of the world’s population, 1.5 billion people?”

Winkle:  “OK, 2%, 140 million people?  Half a percent – 35 million people.  Seriously, it has to be at least that bad to bring the world to such a standstill.  No Summer Olympics!  No Masters!  No Spring Break!”

Tilting his head and squinting his eyes, Winkle starts looking around for a camera as he’s sure he’s on some modern Candid Camera reboot or is being pranked by those Russian radio shock jocks who conned Prince Harry into disparaging his own family.

When you finally convince him that he is not being pranked and that the world has indeed kneecapped its economy for a less than 10,000 deaths… less than ½ the number of people killed worldwide in car accidents every single week, Winkle thinks the world has gone crazy, recognizing that it has probably lopped off $5 trillion off of its economy, and perhaps a lot more.

Now of course, the goal of all of that activity – or lack thereof as the case might be – is to keep that number of deaths down.  But the question is, if the world hadn’t imposed such draconian measures on itself, how bad would it get?

Estimates of course vary widely, from tens or hundreds of thousands to 50 million, a little below the total number of people who die worldwide annually from all sources.  Here in the United States the ranges are wide too, from a conservative number akin to what the flu inflicts annually, 70,000 to two million.

Whatever ends up being the case, one has to wonder, what are the real world consequences of such measures.  Sure, there will be the trillions of dollars that governments around the world print in order to try and keep their economies from collapsing.  But what about all the businesses that fail, both big and small.  The jobs that will never return and the corresponding uptick in alcoholism and suicide induced in those who live on the financial edges of life.  Shipments or deliveries of computers or vitamins or kneebraces that arrive two months late.  The weddings that were postponed and never take place or the relationships that fracture as a result of sudden, ‘round the clock’ close proximity.  The 2-3 months of education that kids around the world didn’t get.  The movies people never see, the dates never gone on, the restaurant meals never served.  Not to mention the mental anguish that 7 billion experienced simultaneously. 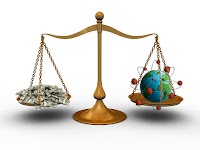 This is indeed a crass way of looking at something, but if one assumes that there is a correlation between economic activity and life & the quality of life, one has to ask, how much damage to both has this shutdown caused?  If we could, before Winkle fell off to sleep, we might ask the question a slightly different way… How many lives is it necessary to save in order for the governments of the world to find it prudent to throw the planet’s entire economy into chaos and essentially destroy between five or ten trillion dollars of economic activity and cause markets to decline by similar amounts?

At 50 million lives saved – again, approximately the number of people who die around the world annually from all causes – the destruction of $10 trillion in economic activity and value equates to $200,000 per life saved, or approximately 20 times the average “value” of every person as measured by the dividing the world’s $88 trillion GDP by 7.7 billion people.  At 1 million lives saved the cost jumps to $5 million per life and at 250,000 lives saved the cost per saved life is $20 million.

No doubt if you or someone in your family is one of the lives saved, that $20 million price tag is well worth it, as is the $200,000 tag.  The question is however, today, when the worldwide death toll from this virus sits at less than 10,000, is it prudent for the governments of the world to send the planet’s economy off a cliff and into freefall to arrest a virus that in even the worst case scenarios is projected to kill less than 1% of the people who actually contract it?

We all probably have our own opinion on such things, but our opinions don’t count in “emergencies”.  Governments are sometimes like lemmings, particularly in a world driven by a floundering traditional media that seeks out or creates chaos or anxiety or sensationalism as it struggles to remain relevant.  Only time will tell whether March 2020 is more akin to the launch of the Manhattan Project or the passage of Smoot Hawley.  History will, as it always does, have the last say…

Posted by Imperfect America at 5:59 AM 2 comments: