One day last week I ran across one of those Top 10 lists. The headline was the 10 Most Dangerous Cities and was based upon the CQ Press release of its 2009 City Crime Rate Rankings. The top ten cities were:

Two things struck me. One: I was pretty sure that all were run by Democrats. Two: I was almost as sure that they were all majority black.

Looking for a correlation somewhere, I started to do a bit of research. Indeed all ten are run by Democrats and have been for a long time... an average of over 40 years, with the shortest being almost 20.

Indeed, blacks make up on average 59% of the population of these cities, and in the two they aren’t a majority, Camden – 48.5% & Oakland – 30.4% they are still the largest group. There was more: These cities’ graduation rates are abysmal, and it’s not because they don’t spend enough money on education. Other than Oakland, every city spends more per capita on education (24% more on average) than their respective states, with New Orleans spending twice what the rest of Louisiana does. Despite this largess, graduation rates are staggering. On average these cities graduate only 44% of their students while their respective states graduate an average of 71%.

As if to add insult to injury, not only are the graduation rates horrific, but those students who do graduate have limited employment opportunities. Other than Jackson, MS, these states have significantly higher unemployment rates than their states: The cities have an average unemployment rate of 14.5% while their respective states average 10.24%. For black teens it can be two, three or four times that.

What is the point of all of this? That much of this damage is self inflicted. How? By allowing the Democratic Party to take black voters for granted. The fact that the Pew Research Center states that 95% of black voters voted for Barack Obama may not be much of a surprise. What might be somewhat surprising is that black voters tend to vote for Democrats 90% of the time across the country. The question is… why? What have the Democrats done for black Americans in the last 40 years besides treat them like children who are not capable of achieving success in school, the workplace or basically in life without the assistance of government? Civil Rights laws… not so much. 80% of the Republicans in Congress voted for the legislation while only 60% of the Democrats did. Between affirmative action, welfare, and putting a stranglehold on the education system, what have they wrought? These ten cities are a perfect example of what is wrong. Democrats run the places and they simply don’t care about making things better for blacks. They don’t need to because for a significant part of the black population, their votes are guaranteed. Blacks in the United States have shackled themselves far more than any overseer ever could. At least in China and Venezuela and Cuba they have an excuse for their misfortune… they didn’t have a choice. When one of their politicians gets 90% of the vote everyone knows that it was delivered at the end of a gun. There is no such excuse in the United States.

The reason why the list above is so important is because it highlights the fact that local politics is where voters can have the most significant impact on their lives and those of their family members, i.e. police departments, land use zoning, business regulations, etc. While a citizen of Memphis may be only one of 3 million voters in Tennessee, they are one in 500,000 in Memphis. Still a big number, but with a few friends those votes can add up. Indeed, in 1991 incumbent mayor Richard Hackett lost by a total of 142 votes out of the half million cast.

Democrats have been taking black voters for granted for too long and I for one (although I’m white…) feel that that should stop now. Fiscally conservative (and sometimes Republican) ideas such as low taxes, small government and rule of law are a recipe for success for all Americans – including blacks, if it were only possible to implement them. Below is an example from someone who is a Republican, who should be the role model for the kind of politicians black Americans should be looking for.

Rudy Giuliani is the former mayor of New York. He was pilloried by the likes of Al Sharpton and the New York Times for being insensitive to black New Yorkers' concerns and presiding over a time of racial strife. The truth is, Rudy Giuliani did far more for black New Yorkers than Al Sharpton ever did. Not even counting the many jobs that were created by his cleaning up of the city and welcoming back businesses, tourists and citizens, he was responsible for saving the lives of 3,400 black men. How? By simply getting back to the basics and bringing law and order to the city. Blacks make up about a quarter of the population of New York, yet represent 56% of its murder victims. In 1993, the year before Giuliani became Mayor, New York City had 2,420 murders. In 2001, his last year in office, there were 960, a decline of over 60%. Given the fact that 56% of murder victims are black, the numbers of potential victims saved by Giuliani’s efforts is staggering.

Over the course of the years 1994-2001 the number of murders in the United States outside of New York City declined by 31.8%. The nearby chart shows the number of murders in NYC and what the numbers would have been if the city had fared only as well as the rest of the country over that period of time. Rather than the actual 9,751 murders there would have been 15,895, a difference of 6,144. Assuming that 56% of the victims would have been black, that means that there were 3,440 fewer black murder victims in New York over his tenure than there might have been. That’s 3,440 families that did not lose a son, a father, a breadwinner, or a role model. 3,440 black men still alive to take care of and support their families… at the end of the day that is a far greater accomplishment than browbeating banks into making bad loans, inciting riots against Jewish shop owners or picketing Don Imus. 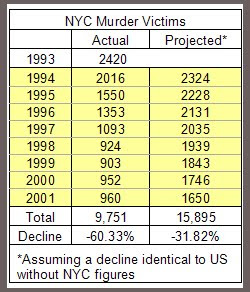 By voting almost exclusively for Democrats and their policies, black Americans have created a situation where they may be the most poorly represented population on the planet. They give their votes and get nothing in return but the luxury of being disproportionately represented in the most dangerous cities in the country.

The result of Democrats taking the black vote for granted has been 40 years of failed policies and a disaster for citizens of cities like Camden, Detroit and New Orleans. Al Sharpton, Barack Obama, Barney Frank, Chris Dodd and the rest of the Democrat/Progressive cabal have spent decades focusing on things like redistribution of wealth, taxing corporations out of business or the red herring of “social justice” and basically telling black Americans that they cannot survive without government help. Really? Tell that to Michael Jordan. Tell that to Oprah Winfrey. Tell that to Ken Chenault. Tell that to Tony Dungy. Tell that to Condoleezza Rice or Michael Steele.

The solutions to the problems of black Americans, these cities, and America in general are the same. How does one bring about better schools and education? Competition. How does one spur investment? Cutting taxes. How does one create new jobs? Reduce regulation and create a business friendly environment. How does one reduce crime? Let law abiding citizens arm themselves from the criminals who pay no attention to gun laws in the first place.

There is hope however for the cities listed above. In 1993 Rudy Giuliani received 5% of the black vote while his opponent David Dinkins received more than 90%. Four years later, after his policies had begun to take hold and the city and its citizens began to blossom, Giuliani received approximately 25% of the black vote. If blacks in these ten cities started demanding real solutions in exchange for their votes they just might find themselves off of that list altogether. Now that would be a real emancipation.
Posted by Imperfect America at 3:23 PM