Last week President Obama was overheard telling a room full of Democrats that during the most recent budget negotiations the GOP had sought to defund some of his priorities. He checked them into the boards with “Do you think we’re stupid”? 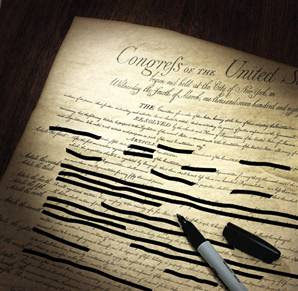 While the GOP members certainly don’t think the President is stupid, he definitely thinks the voters are. (Perhaps with good reason… If you haven’t seen the video “How Obama Got Elected” now as we roll towards 2012 it might be a good time to watch it. If you have, now is a good time to revisit it. The level of ignorance of some of people who exercise their right to vote is nothing short of extraordinary. Rather than giving out voter cards at the DMV like lollypops at a pediatrician’s office we might want to require prospective voters to pass the same citizenship test wannabe citizens must pass…)

Not that it should be a surprise to anyone that the President thinks Americans are stupid. It’s one thing to hoodwink people during the campaign as everyone expects politicians to stretch the bounds of credulity. This was perfectly demonstrated when candidate Obama suggested that he sat in Jeremiah Wright’s church for 20 years yet somehow never heard a single one of his racist anti-American diatribes. It’s another thing all together to expect citizens to believe their President is openly seeking to mislead them. Such was the case early on in the Obama presidency and that arrogance was never as clear when the administration introduced what is possibly the most absurd policy gauge ever uttered by any politician, the infamous: “Jobs created or saved.” How is it even remotely possible that the president thought that anyone with a functioning brain would consider “Jobs created or saved” as a legitimate measure for any policy anywhere? No idea, but they did… and did so with a straight face.

Now we jump ahead two years and we finding the President once again demonstrating low opinion he has of average American’s intelligence. Not only does he think that Americans will somehow forget his plethora of flip-flops, (which Victor Davis Hanson lays out brilliantly here) what’s worse, he thinks that no one else in the country is bright enough to understand the Constitution.

One example - In December, despite a federal court ruling that the FCC lacked authority to regulate Internet service providers, Chairman Julius Genachowski and two fellow Democrats on the five-member decided to do just that and rammed through Net Neutrality regulations – which limit how ISPs can use and charge for their networks. Earlier this year the House passed a bill explicitly stripping the Commission of that power and the Senate is likely to kill it. This usurpation of power by Obama portends very bad things… If the default now becomes that the Executive branch gets to decide what it can and can’t regulate, with explicit exclusionary language from Congress being the only yoke on its power, the nation cannot survive as rapacious nanny state government bureaucrats seeking to feed their insatiable appetite for power will always be able to act more swiftly than a legislature of 535 representatives with tens of thousands of different priorities.

In another example, just last week, in signing the budget compromise, President Obama added a signing statement which essentially says he's going to ignore part of the legislation. The bill included Section 2262, which essentially defunds the President’s czars overseeing the auto industry, health care, climate change and urban affairs. Strangely, rather than simply abiding by the legislation’s covenants, which actually applied to positions that were already vacant, the President felt the need to explicitly say that Congress did not have the constitutional authority to limit his spending. Back in 2008, then candidate Obama said that unlike George Bush, he “would not use signing statements as a way to do an end run around Congress.” Essentially what the President is doing is practicing a line item veto; something I and many others support, but thanks to Rudy Giuliani, the Supreme Court has ruled unconstitutional. Barack Obama doesn’t care about that and thinks American voters are too stupid to notice. As if to prove the point, now he’s not even using a proxy like the FCC to shred the Constitution, he’s going out of his way to do it himself.

These are but two examples where President Obama, the self described Constitutional expert “I taught the Constitution for 10 years” is demonstrating his disdain for said Constitution. At the same time however the issues are relatively esoteric. It is up to the Tea Parties and the GOP (if the leadership can remember that the word leadership actually suggests leading) to clearly articulate to American voters that while Barack Obama may be a Constitutional scholar, he does not feel the document applies to him or his administration. If they can do so in a coherent and compelling way, even the voters in John Ziegler’s video might be bright enough to vote against another four years of “Change we can believe in”.
Posted by Imperfect America at 2:44 AM