One of the challenges in politics is going from the general to the specific. Practically every American wants the things most politicians promise they’ll deliver: more jobs, economic growth, good schools, less poverty, freedom, a coherent foreign policy, etc.

The more opaque a politician gets the better voters seem to like it. The poster child for this was of course Barack Obama in 2008. What in the world does Hope and Change actually mean? Virtually every American hopes for the things listed above, but in terms of a plan for actually addressing any of them, what does Hope and Change really mean? 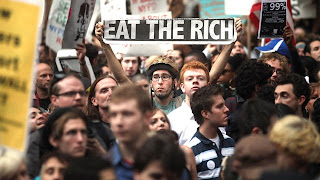 Maybe this is it. From the leadership of the “leaderless” Occupy Wall Street movement we get some clarity: Free college tuition; open borders; a trillion dollars each spent on infrastructure and environmental repair; higher taxes on the rich; guaranteed living wage income regardless of employment; immediate across the board debt forgiveness for all; universal healthcare; and of course, prosecution of the ubiquitous Wall Street criminals. That sounds about right.

Hope and Change, whether the opaque 2008 version or the more clearly defined version above will probably not work in 2012. Not only does President Obama have an actual record to run against, but more importantly, voters realize that 2012 may be the most important election of their lifetime. As a result they are actually paying attention to issues and are curious about exactly what policies a politician will implement when they take office.

As such, Newt Gingrich is trying to resurrect the success he had 17 years ago with his new 21st Century Contract with America. Good luck to him. Noticing that few of the other GOP candidates have been as straightforward, I would like to help out in case they still looking for the right set of ideas.

Here is a list of the ten specific things a candidate could promise he or she will do out of the gate that will result in the economy turning around and subsequently taking off like a rocket as it ushers in a dramatic increase in jobs, productivity and prosperity. I call them 10 for 12…

2. Build a wall from Brownsville, TX to San Diego, CA. It’s not a perfect solution, but it’s a lot easier to police than thousands of miles of open land. Reform the immigration system to favor those with the skills, education and resources to find gainful employment or start a business. Allow any student who graduates from an accredited college to remain in the United States indefinitely if they either start a business or find employment.

3. Repeal the 16th and 17th Amendments. Eliminate the IRS and implement the Fair Tax. Close the Departments of Energy and Education, the FCC, the NLRB, NEA, PBS, Amtrak and dramatically slash the budget and power of the EPA. Outsource the operations of the Post Office. Sell or shutter Fannie Mae, Freddie Mac, Sallie Mae and get the government out of the home and student lending business. Sell stakes in GM and any other private sector entities.

4. Repeal Obamacare. Encourage states to allow interstate competition for health insurance and to experiment with a variety of health delivery systems. Repeal any federal legislation that hinders such competition.

5. Begin the process of eliminating all welfare programs. Set a four year timetable after which the federal government will be out of the welfare business. Provide job training for long term welfare participants to prepare them to stand on their own feet. Create a plan to empower churches and other organizations to provide assistance to those in need.

6. Implement loser pays n the federal court system and encourage states to do the same.

7. Open all unused federal lands, other than those designated as National Parks, to bidding for the purposes of exploration for and extraction of natural resources, or for conservation or development. Allow winning bidders to execute the contracts they paid for.

9. Eliminate Social Security for persons under 50. Establish self directed funds for individuals equal to their accrued contributions to date into the program. Introduce market competition into Medicare by creating a system similar to the one available to federal employees.

The consequence of these policies would be to throw the federal government into something of a whirlwind. At a minimum it would result in a flurry of activity by bureaucrats seeking to justify their continued employment... which means they could not spend much time writing new regulations. More importantly, Congress and the President would by design be forced to enter into a discussion as to the correct role of government. No longer would their hands be tied by laws that could never pass today. No longer would agencies be allowed to metastasize into a cancer on the economic freedom of Americans. At some point equilibrium would set in which balanced government rule making with forced re-evaluation of existing legislation.

The most important outcome, however, would be that Americans would once again understand they are free to focus on the pursuit of happiness without the constant fear of an ever encroaching federal government strangling their liberty while they are on that quest.
Posted by Imperfect America at 3:43 AM