The Vietnamization of Iraq - The Narcissistic Legacy of Barack Obama

A president’s job is tough. And that goes for any president. Aside from being in charge of an organization that employs millions of people and is responsible for the expenditure of trillions of dollars, he is the Commander in Chief. And it is in that area that no doubt weighs most heavily on presidential shoulders. The decision to send young men into battle where you know for an absolute certainty that some will not return must be an extraordinarily difficult decision to make, even when, as in say the D-day landings or Afghanistan, the clarity of the line between good and evil is as stark as between black and white.

For better or worse, that is one of the roles that a president signs up for when he takes the oath of office. Thankfully, other than for a remarkably small number of years in American history, the need for presidents to regularly make those kinds of decisions have been rare. Abraham Lincoln didn’t have that luxury. Neither Wilson nor FDR had it. Nor did Truman, LBJ, Nixon or George W. Bush. And Barack Obama hasn’t had that luxury either.

Adding to the complication of being a war president is the fact that for those not on the battlefields, life often goes on as normal. Aside from the Civil War and WWII, America has rarely been involved in a war where virtually everything in the country was on a war footing where everything is managed for the specific purpose of supporting the war effort. And as life goes on for most of the population, so too does politics, although any war effort is part of that equation.

One of the assets a president has at his disposal is a professional military. As such, presidents usually leave tactical decisions to the military while they can focus on the strategic decisions. In other words, a president decides which wars need to be fought, and the military generally figures out how to accomplish the given task. The lines are never stark between tactics and strategy however as LBJ often wanted to pick the targets to be bombed in North Vietnam and George W. Bush decided to launch “The Surge” in Iraq. 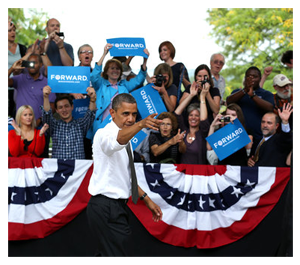 Governing and politics are theoretically different things, but in practice they too blur significantly. From political appointees to which cases to prosecute to deciding what’s a granted Constitutional power and what’s not, there is no clear line of demarcation between politics and governing. When the decision impacts how high farm subsidies will be or what the tax rate will be or how much cable companies can charge, those blurred lines are often tawdry and reprehensible, but they rarely result in the loss of human life.

The president’s responsibility as Commander in Chief is another story altogether. By its very nature that responsibility demands a higher level of attention by a president, and while politics will never be far from his mind, as Commander in Chief his duty is to think strategically in situations where the lives of civilians – both American and foreign – are at risk and the tactics necessary to enforce his strategic decisions may cost the lives American soldiers.

Which brings us to Barack Obama and Iraq. He was against the Iraq war from the beginning, as a state senator at the time saying: “I am not opposed to all wars. I'm opposed to dumb wars.” Later as a senator Obama opposed the surge in 2007 and in 2008 voted to pull out American troops within 120 days. Ending the war in Iraq and bringing American troops home was cornerstone of candidate Obama’s platform in 2008. And as president he was adamant in his intention to keep that promise.

In reality however, the ground had been laid for the end of the war before Obama took office. George Bush signed the Status of Forces Agreement in November of 2008 that called for pulling all American combat forces out of Iraq by the end of 2011. What the SOFA did not cover however was the support that the United States would provide Iraq beyond 2011. Robert Gates, (George Bush’s Secretary of Defense in 2008 and Obama’s until July, 2011) told Charlie Rose that although their mission would change, he expected “perhaps several tens of thousands of American troops” to be left in Iraq after 2011.

And what were those troops supposed to be doing? Providing the Iraqi military with support and training and emboldening the Iraqi people to continue their march towards democracy with the knowledge that they were not going to be left hanging out to dry by the United States.  (Democracy rarely come quickly or easily.  The United States spent seven years under the disastrous Articles of Confederation before we got it right with the Constitution, and that's without being surrounded by neighbors who provided tens of thousands of terrorist agitators with weapons, training and safe harbor.)

But Barack Obama would have none of it. With an eye on the 2012 election he was determined to fulfill his campaign promise of ending the war. But what’s more, President Obama went farther than even candidate Obama did. Candidate Obama promised: "After this redeployment, a residual force in Iraq would perform limited missions: going after any remnants of Al Qaeda in Mesopotamia, protecting American service members and, so long as the Iraqis make political progress, training Iraqi security forces." President Obama didn’t even do that. Indeed, he actually left the Iraqi people hanging out to dry, with dry being the operative word in a country that can only be described as a tinderbox surrounded by firebugs.

Rather than leave the 30,000-40,000 troops that Bob Gates and the rest of the military establishment suggested was necessary to give peace a chance, Barack Obama decided to leave only what was necessary to secure the American embassy. Had Barack Obama heeded the advice of the military professionals the Iraqi people very well may have been able to keep the sparks of sectarian violence and the duplicitousness, incompetence and partisanship of the Maliki government from becoming a raging inferno of death. But alas, unfortunately for the people of Iraq – and those in Syria and Lebanon and perhaps many more places – Barack Obama had better things to do than ensure that the blood and treasure America spent in Iraq over 7 years was not in vain. No, he had a election to win. 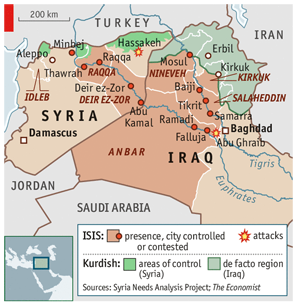 And the Vietnamization of Iraq was very much predictable. Today Iraq is a bloody mess, literally, and Barack Obama is finding himself forced to use the American military to try and keep what can only be described as a raging inferno from transforming into a cataclysm that engulfs every nation within a thousand miles and eventually reaches American shores.

Such is the character of a liberal, when reality clashes with grandiose theory, go with the theory as it’s usually someone else who’s left to pick up the pieces. Unfortunately for Barack Obama, his pursuit of political expediency vs. real leadership just might be the thing that torpedoes his cherished legacy of greatness. However unlikely it is to diminish him in the eyes of his worshipers, the rest of the country will see this episode for what it is, Barack Obama unleashed, in all of his unvarnished, narcissistic glory, bloodshed and consequences be damned, there’s an election to be won.
Posted by Imperfect America at 1:48 PM