America has a love affair with Top 10 lists. Probably the most well known is David Letterman’s “Top Ten List” that began as a throwaway skit on NBC 30 years ago and soon became a cornerstone of his program, even more so when he later moved to CBS. There’s also ESPN’s Top 10 Plays of the Day… and they even have a Not Top 10 list. And no walk through a grocery checkout would be complete with catching a glimpse of at least one magazine touting a Top 10 list of beauty tips, sexiest men or Hollywood divorces. Then of course there are the Internet’s ubiquitous click bait ads featuring “Top 10 things you didn’t know about…” this celebrity or that food or cute animals.

If nothing else, Top 10 lists are an attempt to focus attention… whether they are seeking to entertain audiences, sell magazines or drive online stats. They can however sometimes be things of consequence. This is one of those times, and this list is about more than just making viewers laugh or readers envious. It’s about the first ten (domestic) things the next president should promise to do immediately upon taking office from Barack Obama. While a complete list would no doubt be exponentially longer, a Top Ten list provides an opportunity to focus the attention of voters and candidates in the months leading up to next year’s election, and provide clarity about what a candidate’s priorities are. 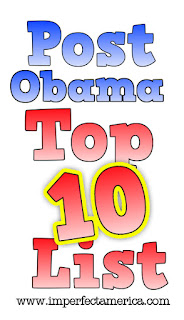 Number 10: Refocus NASA on science and space exploration rather than “Muslim outreach”.

Number 9: Eliminate NLRB Ambush Election Rules – This rule is a giveaway to unions and dramatically ties the hands of employers seeking to present a balancing argument against unionization.

Number 8: Eliminate the HUD rule that seeks to “diversify” wealthy neighborhoods… or what I call the Obaminization of your neighborhood.

Number 7: Withdraw all NLRB lawsuits and actions seeking to apply Joint Employer legislation to franchisors. This position threatens the very foundation of the franchise model that has been so extraordinarily successful and has generated a countless choices for consumers, great wealth for entrepreneurs, and tens of millions of jobs across the country.

Number 6: Eliminate the EPA’s job killing and extraordinarily expensive rule requiring a 30% reduction (from 2005 levels) of CO2 emissions by 2030.

Number 5: Announce that the administration will work with Congress to repeal Dodd Frank… the disastrous legislative and regulatory leviathan implemented in the wake of the housing collapse.

Number 4: Repeal every Obama Executive Order pertaining to immigration and amnesty. Simultaneously announce that the administration will not engage in immigration reform until legislation is passed requiring work begin on a wall from Brownsville, Texas to San Diego.

Number 2: Immediately move to have the FCC repeal Net Neutrality and utilize all administration resources to block implementation and enforcement in the interim.

And the Number 1 thing the next president should do upon taking office is to immediately repeal all executive orders and eliminate all waivers pertaining to Obamacare. Simultaneously the president should send a team to work with Congress to repeal Obamacare and replace it, with the goal of passing reforms that allow free markets and entrepreneurship to provide solutions to tackle the American healthcare situation.

Of course this will not be enough, as there would be myriad things remaining to be addressed such as the oppressive tax code and tax rates, a failed federal education bureaucracy and a stultifying energy policy… and of course a catastrophically dysfunctional foreign policy. But by conspicuously unfurling a standard with such a list, a candidate would quickly put voters and the nation on notice that with him, or her, economic freedom, entrepreneurship and the pursuit of widespread prosperity would once again be primary forces driving US domestic policy. One can only hope that after the long national nightmare of Barack Obama’s reign the country still remembers what prosperity looks like and is willing to pull the lever for someone who understands how to achieve it.
Posted by Imperfect America at 5:17 AM