Immigrants, Slaves, Redistribution and a Cult of Personality: Barack Obama and the Last Days of the Roman Republic

Late last year I started listening to the History of Rome app. While functionally terrible, content wise it’s quite good. Having been many years since I read Roman history, it’s a welcome refresher for those things I’ve forgotten and an education for many more I never learned in the first place.

It’s an extraordinary history, particularly the first 500 years when Rome was a republic. As I was listening I couldn’t help but draw a few parallels between the Roman Republic and ours.

Slavery changed the face of the Roman Republic. Although slavery had been an element of Roman history from the beginning, during the Republic’s 4th century it would fundamentally transform it. For most of the first 350 years of the Republic Rome was a somewhat egalitarian state where, although there were rich and poor, many of the lower classes were farmers who owned the land or worked it under contract for patrician owners. Beginning in the 2nd century BC after the Romans finally conquered Spain, North Africa and Greece the Legions began bringing home the vanquished foes en masse and putting them to work on the farms of patricians who were accumulating vast estates by buying out small farmers with tribute from vanquished lands or by simply taking them. As the numbers of slaves working the land skyrocketed, a similar number of free Romans were put out of work, many of whom migrated to the cities. This ever growing number of free Romans who could not provide for their families was a problem for the ruling class and free and subsidized grain programs were implemented. Indeed, in 123 BC Gaius Gracchus codified a law that set aside a given portion of the grain revenue be provided to citizens at a heavily subsidized rate.

So we have immigrants taking the jobs of citizens and many of the displaced ending up on the government dole… Sound familiar? Here in our Republic, according to Pew, 17% of American jobs are filled by immigrants, both illegal and illegal. That, according to an organization that consistently undercounts the number of illegal immigrants, equals 23.8 million jobs. This while there are 94 million American adults not in the workforce, and fully 34% of the population living in homes receiving welfare. 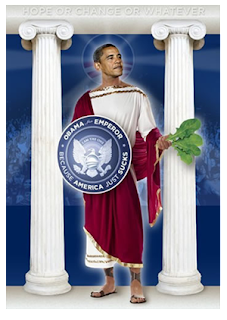 There is of course more… From its beginning the Roman Legions were populated by land owning citizen soldiers. By 100 BC when so many citizens had lost their land to the patricians the requirement for landowning was eliminated all together. As a result, an enormous number of men joined the Legions. And because it’s never a good idea to have armed men standing around with nothing to do, Rome put them to work. It’s no surprise then that during the last century BC Rome grew more than it had at any time in its history and faster than it would at any point during the Empire.

The Legionnaires were of course… government employees. And how do rulers deal with government employees? By promising them the moon and then taking whatever is necessary from the citizens to pay for it when the bill comes due… which is exactly what happened. Indeed, Julius Caesar made himself quite unpopular in Rome when he “redistributed” vast amounts of land and wealth from his enemies in Rome to his Legionnaires.

Finally there is the Cursus honorum, a law that laid out the sequences of public offices that a politician must follow over their career, including terms, frequency, limitations, and from 180 BC, the minimum ages necessary to fill each position. During the last century of the Republic the Cursus honorum was shredded as the Republic came to be dominated by competing cults of personalities around generals who increasingly ignored the law. Gaius Marius was one of the first to openly flout the Cursus’s dictates and after him the floodgates opened, and by the time Julius Caesar and Augustus were finished, the Cursus wan’t much of a suggestion, nevermind a law.

Thankfully, on January 20th 2017 the long national nightmare of the cult of personality known as Barack Obama will finally come to an end, at least the ruling part of it. That is, of course, unless some “unforeseen” event occurs that forces a “postponement” of the constitutionally required election or the next president’s inauguration… But even if we assume Obama recognizes that he can’t overstay his term, one wonders what will be left in his wake.

With his flagrant lying to the nation – Benghazi – his using the police power of the state to intimidate his opponents – IRS Tea Party scandal – his unconstitutional rewriting of laws – Obamacare waivers – and his vast expansion of the regulatory state – Net Neutrality – not to mention the above noted immigration and redistribution policies, one has to wonder if Barack Obama has not set our Republic on a course that mirrors that of the Romans. Is our Constitution better able to withstand a tyrant than the Roman Cursus? Will January bring a new president who pulls back from the Obama overreach and puts the nation back on a strong Constitutional footing or will the new president build on Obama’s imperial presidency and further distance the nation from a limited government republic? Let’s hope that the “Constitutional scholar” in the White House who actually knows very little about the Constitution and respects it even less, is replaced by one who not only understands the document, but recognizes its virtues, and has a record of defending it in the highest court in the land. Hopefully Ted Cruz will have more luck rescuing our Republic from tyranny than Cicero did in saving Rome’s.
Posted by Imperfect America at 9:53 AM