The Art of the Steal... Democrats voting in GOP contests make a HUUGGEEE difference

UPDATE:  The infographic below did not originally include ID, MI and MS.  Their addition only strengthens the premise of this post.

Back in 2008 Rush Limbaugh had a bit called “Operation Chaos” where he suggested Republicans in Ohio and elsewhere cross over and vote for Hillary Clinton in the Democrat primary. The goal was to keep Clinton in the race to blunt the lead of Barack Obama and cause more chaos on the Democrat side. Well, Operation Chaos was pretty much a failure as Obama steamrolled Clinton.

While Limbaugh is not calling for an “Operation Chaos” this year, something along those lines is definitely happening… but it doesn’t have anything to do with Hillary Clinton this time, but rather, Donald Trump.

The turnout for this year’s primary contests is surging with record numbers of voters participating on the GOP side. No doubt there are Republicans who sat out in 2012 and 2008 who are now participating. But that’s not the driver of the numbers. The driver is… Democrats. In Massachusetts as example, according to the Boston Herald 20,000 Democrats switched to the Republican Party before the primary. That works out to fully 5% of the GOP ballots cast. Interestingly, Trump’s 31% margin of victory in Massachusetts was the largest he’s has had.

In Pennsylvania the same thing is happening. According to CBS 46,000 Pennsylvania Democrats have already switched to the GOP to vote for Trump. If the participation in the Pennsylvania primary exhibits the same kind of increase Massachusetts did (up 12% over 2008, the last year with a lame duck president in office) then those 46,000 Democrats will make up 5% of the 900,000 GOP voters.

But of course that’s not the only way Democrats are influencing the GOP primary. In Massachusetts and Pennsylvania they switched because both are closed states in that registrants of party can’t vote in the primaries of another party. Massachusetts is officially open however as unaffiliated voters can vote in any party’s primary. That means that the only way Democrats in those two states can vote in the GOP primary is by changing parties.

But in a large number of states you don’t even have to do that. Those states have “Open” primaries or caucuses where voters can vote in either party’s primary, regardless of which party they are registered in. That makes a HUUGGGGEEEE difference. (And for course, Ohio is an "Open" primary.)  To give you an idea of how big, consider the following: 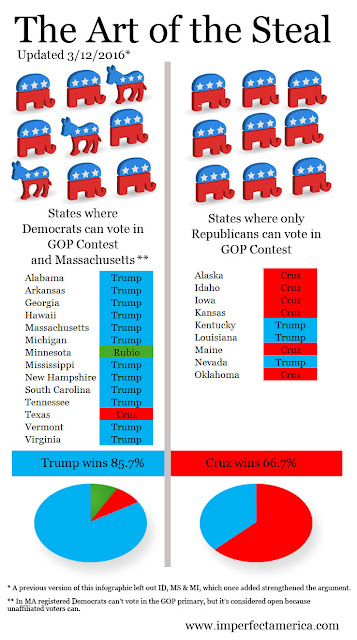 Conservatives like myself find ourselves growing horse explaining that Donald Trump is no conservative, that he loves big government and is no friend of liberty… all to no avail. The Trump train keeps rolling on. We wonder, how is it even remotely possible that someone so antithetical to the principals of limited government and individual freedom could be leading in the GOP race when a guy like Ted Cruz, who lives and breathes and bleeds those things is on the same ballot? Well, now we know. Republicans are not the ones making Donald Trump the front runner, Democrats are.

While you can make the argument that some of them may indeed be moving to the party to vote for Trump rather than playing out a reverse of Limbaugh’s “Operation Chaos”, you have to ask yourself how many Democrats who voted for Barack Obama are going to be pulling the lever for any Republican in the general election?

So it should be no surprise why poll after poll shows Donald Trump getting trounced in the general election by either Clinton or Sanders… It’s Clinton’s and Sanders’ voters who are picking the opponent for their candidate! Picking the players on your side and the players on the other side. That’s a pretty good position to be in, it almost sounds like something right out of the Art of the Deal. Hmmm, you don’t say…
Posted by Imperfect America at 3:32 AM