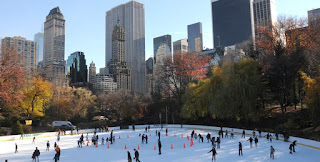 As Donald Trump seeks to throw a wrench in the works of how government works... or more often, doesn't, we should be prepared to listen to Democrats and liberals wail at every move.  Just look at the cries that welcomed the nomination of a climate change skeptic to run the borg known as the EPA.  Remember, Trump's the guy who, after NYC wasted $13 million over two years failing to renovate Wollman Rink, went in and accomplished the task in 4 months for $2.25 million...

The reality is, Democrats and liberals rarely want government to actually improve things or solve problems... Sure, they say they say they want to improve schools, create more jobs, and reduce crime, but, they don’t really. And how do we know this? Because of the policies they advocate.

One place where this is obvious is in education. Liberals constantly advocate for an increase in education budgets, but there is a zero correlation between that spending and better performance. The United States spends more per pupil on education than any country in the developed world other than Switzerland, yet somehow American students rank in the twenties or thirties when compared to that same group.

And this is not new… Between 1970 and 2006 the per student cost of a K-12 education in the United States tripled while test scores remained flat. For the left, improving education means spending more money, not improving the actual education of students. That increase of money involves not only teacher’s and teacher salaries as they would have us think, but more ominously, administrators and non classroom personnel.  Between 1950 and 2009 the number of students in the United States increased by 96% and the number of teachers increased by 386% while the number of administrators increased by 702%! And there’s more! In 21 states across the country, there are actually more non-classroom personnel in schools than there are teachers! In Texas, over the last 20 years while the student population grew by 37% the non-classroom staff grew four times as fast, surging by 172%.

All of this increase in spending and personnel might be reasonable if students were learning more and scoring better on tests, but they're not, particularly in the biggest urban school districts where most of the money is spent. And of course it’s the big cities where liberals have a virtual stranglehold on education… But then calls for education spending isn’t about education, it’s about government jobs, union dues, and ultimately Democrat campaign contributions.

Another example of liberals not really being interested in the welfare of the people they claim to support can be seen in California where immigration advocates are seeking to have the state destroy CalGang, a database compiled over years that contains the names and information on 150,000 suspected gang members across the state - or at least put it in some inaccessible lockbox.

Why would liberals want this database destroyed? So that Donald Trump can’t access it. Still, why?Because a state auditor observed last year that approximately 13% of the database represented names that were “inappropriately included”. That includes names that should never have been added in the first place, names that should have been taken off for being “inaccurate”, or youths whose parents were not properly notified prior to their being added. In addition the database might be sexist and racist because it’s 93% male and disproportionately minority as 64.9% of its database is Hispanic and 20.5% black.

Activists don’t want Donald Trump to be able to access the information so that hen't can fulfill his campaign promise of deporting illegal aliens who have committed crimes.

Now think about that… this database of gang members, which even by the auditor’s account, is at least 87% accurate, should be “blocked from federal access” because of the possibility someone wrongly included might get deported. Nevermind that being a suspected gang member isn’t sufficient to get someone thrown out of the country. They still need to be here illegally. Nevermind that police agencies across the state are constantly reviewing the database and removing names that are not supposed to be there or no longer supposed to be included. In liberalese, if it’s not 100% perfect then it can’t be used... and even if it were, we can imagine they'd find another rationale for blocking access.

So in a world where gangs are responsible for 80% of all crime and 50% of violent crime, liberals want to mask the membership in gangs of approximately 150,000 Californians so that a president who promised to deport criminal illegal aliens can’t do so because of the possibility that 20,000 of those names maybe shouldn't have been included.  Of course that makes sense in a state where there were 1,861 murders last year... and probably half of those were committed by gangs and gang members.

So here’s the thing… rather than concern themselves with the families of the approximately 1,000 people murdered by gang members in California in 2015, liberal activists would prefer to keep the imperfect database out of the hands of Donald Trump because of the slight chance he might deport someone whose inclusion in the database was possibly erroneous! Liberals would rather protect illegal alien criminals than protect the victims of their crime... most of whom are the same Hispanics they are seeking to "protect" in the first place!  But there's not nearly as much fundraising to be had from advocating for murder victims' families as there is for leading demonstrations against government "injustice" against innocent undocumented workers who went through hell to come to America so they could make a better life for themselves only to be unjustly threatened with deportation by a racist president.

As the next four years unfold and liberals seek to thwart Donald Trump -  the hero of Wollman Rink - at every juncture, keep in mind that their goal is never really achieving the outcomes they claim to advocate, whether it’s better education, lowering crime or virtually anything else. If it was they would abandon liberal sophistry and start advocating policies that actually work. But as those rarely increase their power, their bank accounts and ultimately their control, so don’t count on it.
Posted by Imperfect America at 4:27 AM