Donald Trump, Superman and the Suit of Kryptonite

I was skeptical when Donald Trump announced he was running for President.  I was however, by election time very much in his camp and up until January or February I thought he’d been an extraordinary president.  But this Coronavirus has changed the calculus.

Since the problem was first brought up, he hasn’t done what almost any modern President would be inclined to do… He hasn’t taken charge of or nationalized anything.  Not hospitals, not pharmaceutical companies, not healthcare manufacturers not university research labs.  He hasn’t used the power of the office to require citizens to shelter in place, nor demanded testing nor quarantine or tracking of those with the virus.  The bottom line is, he hasn’t used the power of the federal government to take charge of this crisis and impose a solution.

Most certainly Hillary Clinton would have done so.  As would have Barack Obama and probably John McCain and even George Bush… But Donald Trump didn’t… And that’s to his credit and our good fortune.

Just as Sol Wachtler famously said "a grand jury would 'indict a ham sandwich,' if that's what you wanted."; had virtually anybody else been in the White House during the Coronavirus pandemic, you can be certain that the Executive Branch would have usurped a vast array of powers from state and local governments, created new previously unimagined powers on the thinnest of Constitutional grounds and in turn created a plethora of new agencies with vast powers that would undoubtedly lasted far longer than the “crisis” itself.  But it wasn’t anyone else in the White House, it was Donald Trump, and he didn’t do any of those things.

He has managed this crisis almost perfectly.  It hasn’t been without problems, but he has done what an American president is supposed to do.  He utilized the Constitution and its inherent federalism to help states and governors to respond as best as they could to their particular circumstances.  He didn’t dictate, but rather, he gave assessments and information and suggestions and came to the aid of states and cities when they called.  In a word, he acted like a President in the Constitutional sense.
This is particularly notable because of the extraordinary claims experts were producing via a variety of “models” that were supposed to predict the future.  Two million or more Americans dead.  Three hundred million Americans infected.  This was the Black Death incarnate.  But Donald Trump didn’t bite.

He actually did what Presidents are supposed to do in war… take the advice of the generals, of his advisors and decide what is best for the country.  Generals are often accused of wanting to bomb the enemy into the Stone Age.  That’s usually wrong, but it is the case that a general’s job is to win a battle or a war.  That is their focus and for outsiders who don’t understand the dynamics of what the military is tasked with, the generals and admirals focus on attacking and killing or neutralizing the enemy can seem barbaric.  But it’s not.  That’s their job… but it’s the President’s policy to set policy, taking their input into consideration along with that of the State Department, the intelligence community and other players.  Generals are focused on the battlefield but the President is focused on the country and the world.

The same holds true here.  While the “experts” were looking at the worst case scenarios and  predicting Armageddon, Donald Trump was taking a 30,000 ft. perspective and trying to figure out what made sense and what didn’t, and deciding what he should do and say.  And in the process, he tried to remind the country that economics matter and jobs matter and prosperity matters, both in dollars and actual lives.  In the process, rather than taking over industries or companies, he partnered with the private sector to advance everything from manufacturing ventilators and PPE (Personal Protection Equipment) to developing testing kits to searching for drugs that help protect from the virus or treat it. And he enlisted the Navy and the Corps of Engineers to increase capacity when governors thought they needed it.  Things haven’t proceeded perfectly, but they’ve worked far better than they would have had some proto dictator with a D next to his or her name been sitting in the Oval Office.

On the ground some governors have applied a light hand in navigating this virus while others revealed the petty autocrats within as they revel in their newfound “emergency” powers – with diktats which often ignored or even set fire to the Constitution and individual rights.  All the while the President resisted calls for the White House to “take command” and issue decrees as to how the country should deal with this virus.  While he listened to the experts, he understood they, like generals in war, are not the only voices to be heard.  The result has been a combination of daily information, regular suggestions as to how states and citizens might comport themselves, and an aggressive suspension of regulations that would have otherwise hindered potential problem solvers.

As if all of this was not enough, Donald Trump has somehow managed to shine throughout this crisis despite having spent the last four years battling the Democrats, Never Trumper “Republicans” and the media on a daily basis. From tax evasion to being paranoid about wiretapping to removing MLK’s bust from the Oval Office to Mike Flynn to Michael Cohen to the 25th Amendment & incapacity to kids in cages to being a racist to simple incompetence to the Emoluments Clause to the Russian Collusion hoax to the Ukraine hoax to impeachment to claims that he ignored warnings of the coming Coronavirus, the last four years have been an unrelenting hail of vicious attacks.  I can’t help but wonder how most of us would fare if we had to deal with such abuse every day of our lives, and had it broadcast to the world to boot! 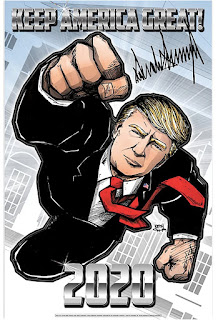 Yet somehow, in the face of these withering daily assaults coming from every direction, Donald Trump has not only managed to largely keep his cool, but he’s been able to be an extraordinarily effective president the entire time, from bringing the economy back to recalculating the Judiciary to exiting the absurd Paris climate agreement and the preposterous Iran nuclear arms deal to streamlining bureaucracy to rebuilding the military.  He’s not been perfect, nor has he always kept his cool, but somehow, in the face of endless, pernicious attacks from all sides, Donald Trump has gotten up every day and done his job in leading the American people and the nation.  The equivalent, I think, would be Superman spending 4 years saving the world despite his enemies having clothed him in a suit of Kryptonite from which he could not escape.

Donald Trump is neither perfect nor warm and fuzzy, but neither is what American needed in 2016 and is not what it needs today.  We need a leader who not only articulates a road ahead that allows Americans to get back to doing what we do best, which is drive freedom and prosperity, but do so in a way that minimizes the yoke of the bureaucratic apparatus built by generations of a swamp culture.  Just as the Civil War gave Lincoln an opportunity to rise to a level few imagined he could, the Coronavirus may give Trump the opportunity to demonstrate leadership that will create his legacy despite the incessant attempts to damage and defame him.  Perhaps 100 years from now we’ll see his visage on Mount Rushmore.

Posted by Imperfect America at 5:12 AM