American Presidents are supposed to be well spoken, articulate, magnanimous and carry themselves with a grace that makes them look natural on the cover of TIME magazine or standing next to the Queen of England.  They’re supposed to get along with the Washington press corps, titans of industry and play their role in the Kabuki theater of Washington DC power where Congress, the Executive Branch and the bureaucracy play their assigned roles and business continues largely unchanged from one administration to the next.

None of that applies to Donald Trump. He’s brash.  He’s arrogant.  He’s a narcissist.  He’s petty.  He’s vindictive.  He makes rash decisions and somehow is never responsible for stumbles that land at his doorstep, even when he’s the guy in charge… Donald Trump is practically no one’s idea of what Americans would traditionally call “Presidential”. 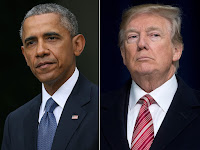 Barack Obama on the other hand was the consummate “Presidential” president.  He was well spoken, genial, and got along well with the media, bureaucrats and foreign leaders.  Barack Obama, by all accounts carried the imprimatur “Presidential” quite well.  It was the actual presidenting that he was so bad at, which demonstrates with crystal clarity that the perception of one’s abilities and one’s actual abilities are not the same thing…

Donald Trump was a bull in a china shop of a President.  Or at least that’s the way the media, Democrats, academia, Hollywood and establishment Republicans painted him.  And that’s the key to understanding Donald Trump... knowing him through his enemies.  Voltaire said:  “I have never made but one prayer to God, a very short one: Oh Lord, make my enemies ridiculous. And God granted it." That prayer very much applies to Donald Trump.  His enemies are ridiculous.  They are failures at virtually everything they touch.  From destroying American schools and cities and the military, Democrats have made themselves beyond ridiculous in the eyes of anyone other than their fellow travelers.  Journalists have destroyed journalism as the majority of the media in the United States today is nothing more than a mouthpiece for Democrat talking points.  And higher education has become a cartoon into itself, with its focus on safe spaces for sparing the feelings of little snowflake rather than preparing young adults for the real world that exists beyond their ivory towers.

And the mortar that keeps all of that ridiculousness and more together is the regulatory state.  The regulatory state is the font from which most power in the United States flows.  The power to regulate gives politicians the power to print money… both for themselves and their friends.  There’s a reason 7 of the 10 richest counties in America – out of over 3,100 counties – are located in the DC metro area.  From cushy government jobs to high paying lobbying gigs to flashy TV news hosting positions to bylines at self important newspapers, wielding power or influencing it or reporting on it is what makes Washington so desirable.  A perfect example of that was on display when hundreds of USDA employees decided to quit their jobs in DC rather than move out into the heartland when the Trump administration decided to place offices where regulators and researchers would be closer to the farms and farmers within their purview. They quit because they knew that Washington is where the power is, where the money is, where the influence is and where the prestige is.

President Trump knew that that regulatory state was a rope around the neck of freedom, prosperity and America.  That’s why he needed to be vilified, attacked and eventually stopped.  Many people ask how some Republicans could stand by and watch as the president from their own party was attacked and disparaged as Donald Trump was. The answer is simple, establishment Republicans don’t really care about party, don’t care about effective government, and don’t care about their constituent's rights.  No, they care about only one thing:  Power.  If they could be out of office and watch government spending and influence slashed vs. be in office and watch government power grow, they would choose the latter every single time.  Go along with Democrats and they get to keep their invitations to Georgetown parties, their sponsored junkets to exotic and sophisticated locales, their regular Sunday morning talk show slots, cushy jobs for their families and of course the promise of a lucrative parachute if they ever find themselves defeated. Rein in government?  "No chance!"

Donald Trump opened up a schism in the United States unlike anything we’ve seen in 150 years.  He didn't do it by demonizing black people or brown people or Muslims or gays or soldiers or any of the other things the cabal of Democrats, media, and Never Trumper Republicans said.  In reality, Donald created a schism by reminding Americans that the nation is indeed blessed, that while flawed, America is the greatest nation in history and that fundamentally, Americans and America are good.  Donald Trump put the spotlight on working Americans… on factory workers and entrepreneurs and problem solvers rather than on the self important politicians and media personalities. This schism is based on power, not race.

In four years Donald Trump did for America what he did forWollman Rink 30 years before.  After years of failure and millions of dollars wasted by the city government on the Central Park skating rink, Donald Trump renovated and opened the rink in a matter of months and under budget. In a similar way, after years of disparagement, Donald Trump made America great again. He showed that Americans that they could get back to work. That they could grow jobs and drive prosperity.  That they could lead on the world stage by embracing, not apologizing for, American values.  In other words, Donald Trump showed America that Americans can still accomplish great things, drove home the idea that it was the American people that made the country great, it was the ideas the Founding Fathers left us that made America great and it was our freedom and opportunity that made America great.  But most dangerously of all, Donald Trump reminded Americans that America’s greatness and prosperity do not come from government, they exist despite government.  And that could simply not be tolerated by the swamp, hence the four years of roadblocks, vilification and eventually a stolen election.

Is Donald Trump a politically dead canary at the bottom of the American mineshaft of freedom or is he a phoenix ready to soar once again and lead the nation to even further greatness?  Who knows? Even today, after Trump emerged from his second impeachment victory his ridiculous enemies are seeking to bar him from Arlington, ban his name from schools and post offices and demonize, stigmatize and marginalize his supporters.

Whatever Donald Trump’s future, one thing is for certain, his legacy is alive and well in the hearts of the 75 million American voters who remember a time when patriotism was a virtue, who understand that it’s possible for a nation to be flawed but fundamentally good, and perhaps most of all, recognize that America is the land of opportunity for every single person.  He may not be what the elite consider a very Presidential President, but he reminded us that it’s our people who make America great, our Constitution that makes her great and our freedoms that make her great despite the swamp's assertion to the contrary. He stood up and unabashedly proclaimed that America was and is a good nation, a great nation, and a force for good... and we believed him.  Whatever he chooses to do, we proudly carry the American flag and enthusiastically support his MAGA agenda... and we're not going anywhere.

Posted by Imperfect America at 6:25 PM