I will be supporting Donald Trump in 2024. The recent revelations that the Clinton campaign spied on candidate Trump before the election and president Trump after should be enough to see that virtually everything Trump claimed was happening… was actually happening.

So what does this have to do with 2024?  Everything, including the election fraud of 2020.

Every single American with a functioning brain knows that Donald Trump won the election in 2020 and that everyone from Mark Zuckerberg to the mainstream media to the Democrat party to Never Trumper “conservatives” conspired to steal it.  And they did.

Of course the theft of the election comes after four years of continuous attacks.  The genesis of most of those attacks was the activity John Durham laid out on Friday: Hillary Clinton’s funding of the fabrication of data suggesting Trump was colluding with the Russians in order to steal the election.  The entire story was propaganda produced, proffered and peddled by Democrats and parroted and promoted by the media.  And millions of Americans bought it, hook, line and sinker, leading to the appointment of a Special Counsel to investigate ties between the Russians and the Trump campaign.  That Special Counsel and the media’s constant promotion of the “Russian collusion” hoax kneecapped Trump’s administration.

And here’s why there is zero chance I will support anyone over Donald Trump.  In 2016 Americans elected the single most revolutionary president in our history.  Not only had he no political experience and no government employment experience, he had more than a half century of business experience, i.e. building things, solving problems, meeting demands of clients and stakeholders of all stripes… in other words, Trump had a lifetime’s experience of getting things done. (Please spare the histrionics about his failures… The only people who never fail are those who never attempt anything.) And so, after more than half a century of creeping government intrusion into their lives, suffering the compounding effects of perpetual government failure and eight years of feckless incompetence from the Obama administration, Americans voted to put in charge of the government not only a man with decades of experience in getting things done, but the candidate who promised to focus on issues of importance to them, i.e. immigration, energy, government overreach and jobs, all under the banner of “America First”.

The kind of revolutionary change Trump promised is almost unheard of in democratic societies.  Typically change of that magnitude occurs as the result of a coup or someone coming to power legitimately and then changing the rules once they get there, as Hitler and Chavez.  Here in the United States the problems were so clear that Americans decided they needed a revolution in policy but could achieve it at the ballot box, which is exactly what they did. But a funny thing happened on the way to that revolution, it was derailed at every point by Democrats and their comrades in high tech, the media and intelligence. Build a wall?  A judge issues an injunction.  Curtail travel from countries from which terrorism emerges?  The Media hypes “Muslim Ban.” Build a pipeline for energy independence?  Indigenous groups pledge mass mobilizations.  When trying to get anything done Trump found himself faced with investigations, document requests, lawsuits, stonewalling by Democrats and sabotage by civil service apparatchiks and establishment Republicans within the administration.  It was literally unceasing.

Yet, despite all of this, Donald Trump was able to accomplish much, making the nation energy independent for the first time since the 1950’s, bringing black and Hispanic unemployment to the lowest points ever, growing GDP faster than it had in 15 years before Covid hit and filling more court vacancies than any president in 40 years.  On top of that, despite Democrat roadblocks, Trump was able to replace 365 miles of dilapidated wall and build another 40 miles of new wall on the southern border. 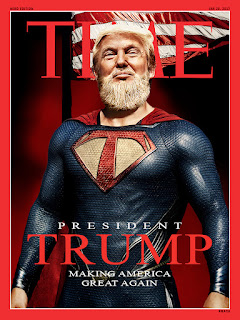 Donald Trump walked into January of 2020 as a shoe-in for winning in November.  Through everything that had been thrown at him, he was still standing and was beginning to pick up steam.  Then Democrats got a gift from China:  Covid. Covid, essentially a very very bad flu outbreak, was seized upon by Democrats and every element of the cabal aligned against Trump to become the lever with which they ousted him from power.  When he closed travel from China he was called a racist.  When he discussed examining existing inexpensive treatments such as Hydroxychloroquine and Ivermectin he was mocked.  When he discussed comments from DHS about different possible cures they accused him of recommending people drink bleach.  When he wanted to balance keeping the economy healthy with keeping citizens healthy they implemented draconian lockdowns. When he implemented Project Warp Speed to streamline regulations to develop a vaccine and promised one by the end of the year, they said it couldn’t be done and regardless, they wouldn’t trust it if one was.  Whatever he did, from making ventilators available to building temporary hospitals to purchasing record amounts of PPE equipment, it was never enough and for good measure they accused him of killing tens of thousands of Americans.

Beyond the personal attacks, the left used Covid as cover for stealing the 2020 election.  From near universal mail in balloting to unconstitutional voting rule changes to outside money using Covid as a cover to infiltrate voting bureaucracies, Covid was the fig leaf behind which Democrats could hide as they ran their coup d'état.

Then, in the midst of the Covid hysteria violent riots broke out across the country in the summer of 2020.  This too was an opportunity to help destroy Donald Trump and the left took full advantage of it, indeed in many cases outright supporting it. The fact that the riots were driven by communist BLM and the fascist “anti – fascists” at Antifa gave the left more opportunities to label Trump a racist and fascist as he sought to quell the violence.

The media, Silicon Valley and big business worked in concert to do everything they could to damage Trump.  From the Russian Collusion, “Fine people” and “Losers & suckers” hoaxes to hiding stories critical of Joe Biden to Pfizer delaying the announcement of their vaccine until after the election, it seems as if the entirety of America’s elite were doing everything they could do to defeat Donald Trump.

And eventually they did.  Not honestly of course, but on January 20th his successor, Joe Biden was sworn in nonetheless.  All of this adds up to the American elites deciding that Donald Trump was too much of a threat to their power to ever allow him to succeed.

In 1962 JFK said “Those who make peaceful revolution impossible will make violent revolution inevitable.”  In 2016 Trump promised a revolution in governance and the American people voted him into office.  For the next four years the petrified elites threw everything they had at him yet he persevered.  In 2020 they stole his election victory and installed their puppet in the White House.

That’s not how America works, or at least it’s not how it’s supposed to.  Which is why I’ll be voting for Donald Trump in 2024.  If pleas to decertify the 2020 election fall on deaf ears, we’re left with the 2024 election as the last opportunity to set things straight.  Donald Trump promised the country a peaceful revolution and deserves a real chance to bring it about. The elite have shown themselves to be fascist tyrants who are ready and willing to disregard the Constitution on a whim, and if their extermination of his peaceful revolution is allowed to stand then our future looks as grim as the one Hitler brought to Germany or Chavez brought to Venezuela.  That will not happen.  There too many Americans not willing to go quietly into that good night as their Republic is transformed into an elite driven totalitarian state.  Kennedy was right.

Posted by Imperfect America at 12:31 AM