Commodus, Nero and the Punk Next Door, or at the Gas Station or in Walgreens...

From Madison reading Cato and Cicero when framing the Constitution to the outsized impact both Rome and America had on the world around them, the United States has long been associated with historical Rome.  There are great similarities, and there can be much to learn.

When most of us think of the worst emperors Roman in history we think of names like Commodus, Nero, Caligula and Elagabalus.  To a man they were vain, self centered, bloodthirsty hedonists who took what they wanted and tortured and killed many thousands of Romans and provincials.

All emperors, including the great ones like Augustus, Trajan and Aurelian had blood on their hands to one degree or another, but most tried to maintain or grow the empire.  Commodus et. al. didn’t.  Their goal was to satiate their lusts, whether literal lust, or gluttony or sadly, bloodlust.  While there were other bad emperors, these four are among the worst.

What makes this relevant today is the fact that all four of these “men” were spoiled, pampered, entitled sadists who were given free reign when they were still essentially children.  Commodus was the oldest at 19, while Nero was 17 and Elagabalus and Caligula were both 16. 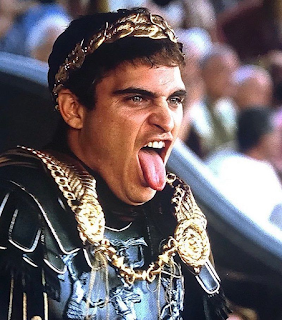 They were overindulged brats who never faced consequences for their behavior.  They were given virtually anything they wanted, or just as often, allowed to take what they wanted with impunity. And it was at those ripe young ages they were literally given the keys to the kingdom and unleashed on the Empire and virtually everyone in it suffered as a result.

Every day in America we see modern day Commoduses or Caligulas wreaking havoc on our streets and in our stores, restaurants, schools and more.  Instead of a single entitled Emperor, America in 2022 is being ravaged by a generation of young men – many of whom have grown up fatherless – who have been told that they can do and say anything they want and that regardless of what they do, there will be no consequences for them.

Just as Elagabalus et al brought nothing but blood, despair and dysfunction to the Empire, these 21st century youth are bringing blood, despair and destruction to America. A generation of Americans has grown up being given “time outs”, “participation trophies” and grades that have nothing to do with actual academic success, while at the same time they’ve been told that all inequality is due to racism or sexism or homophobia or anything other than individual choices or actions.  The consequence of this indoctrination is that far too many young Americans think they can do anything with impunity.  If they want something they take it. If they’re mad about something they protest, disrupt the lives of everyone within shouting distance and frequently riot.   They assault, rape and sometimes even murder, increasingly with impunity.

Pat Moynihan predicted much of this 60 years ago in his “The Negro Family: The Case for National Action."  In it he “…described through pages of disquieting charts and graphs, the emergence of a “tangle of pathology,” including delinquency, joblessness, school failure, crime, and fatherlessness that characterized ghetto—or what would come to be called underclass—behavior.”

While most of the scenes of flash mobs, carjackings, Knock Out Game punches, subway shovings and daily shootings involve black male youth, this is not a race issue.  Yes, the problem is disproportionately black, but white and Hispanic America is increasingly experiencing the same challenges of unwed mothers, school failures and the lack of responsibility that underpins much of the dysfunction.  Whether a California college student getting 6 months for rape, a Texas boy getting no jail time for killing four people in a car crash or charges being dropped against a South Carolina boy for killing someone in a boat crash, unaccountable America spans across races, wealth, and indeed the country itself.  This is nowhere better demonstrated than by the legions of rioters who participated in the “peaceful protests” of 2020 who found their charges dropped or their bails funded by the glitterati.

These unrestrained youth highlight the existential threats to America today:  The lack of accountability and individual responsibility.  To the degree that America’s leaders have spent more than a generation telling youth they’re nothing more than products of others’ malevolent thoughts and actions and are not responsible for their own actions, they shouldn’t be surprised at the carnage we see across the country.  To the degree that single mothers and schools and increasingly DAs across the country are not holding youth accountable for their transgressions, they should not be surprised by the blood on their streets, the boarded up shops in their neighborhoods and the flight of families seeking safety and security.

Since its beginning America has been a nation governed by the Rule of Law as opposed to the Rule of Man. Imperfect and sometimes unequal in its application, America’s Constitution has successfully guided the behavior of government (mostly) for more than two centuries and in doing so guaranteed citizens freedom and the prosperity freedom cultivates.  But that framework only works when citizens feel confident that justice and the laws are applied equally, or mostly so. When citizens begin to recognize Orwell’s “All animals are equal, but some animals are more equal than others" in their daily lives and on their streets and on their television screens, the civilization’s days are numbered.  Which is exactly what Americans are seeing today…

Nero, Elagabalus and the rest of that youthful cohort showcase exactly what happens when young men learn that accountability doesn’t apply to them.  When people aren’t held responsible for their actions, many will act accordingly, without restraints, unleashing a torrent of violence, excess and depravity that tears at the fabric of a civilized society.

Which is exactly where America is in 2022.  If the country remains on its current path, one of coddling youth and ever increasing cries of victimhood combined with the acceptance of rampant crime, ubiquitous homelessness and public drug abuse as the price of addressing “inequality”, it will lead to an acceleration of the breakdown of civilization.  As more citizens feel like they cannot rely on government to provide security and enforce societal norms, they will increasingly take matters into their own hands. They will look for vigilantes like a Charles Bronson character to step into the gap, or more likely, many will choose to arm themselves as they increasingly feel they need to become the next Bernhard Goetz. But 2022 America is not 1994 New York… indeed it’s worse.  Thugs are bolder, crimes are more widespread, and most of all, today everyone feels vulnerable because they see videos of horrific crimes every single day, often in the parking lots of stores they frequent, at the gas stations where they fill up or in the subways they ride every day.  That’s a powder keg filled with 100 million armed Americans who are tired and frustrated and feel let down by a government that no longer cares about them.

Unlike the citizens of the Roman Empire, who were often stuck with whichever murderous psychopath emerged from the carnage to don the purple, Americans have an opportunity to guide their own society in ways that don’t involve assassination or subterfuge or armies marching against one another. We have the ballot box. We have recall petitions.  We have school board meetings and the right to peacefully protest – or at least we used to.  But… will the political and “elite” establishment listen, or will they continue to turn a blind eye to the calls for a return to a civilized society? Blood is already spilling.  The question is, will we get less of it or more?  The ideal is less.  But if the answer is more, the question becomes, whose will it be?  And who will do the spilling?

Posted by Imperfect America at 3:57 AM