Joe Biden Has Picked Up the Nazi's Handbook, and He's Not Trying to Burn It...

Most people know about the Nazis and WWII and the Jews. A century later however what many people don’t realize is that the Nazis didn’t start out as the merchants of death they became.  They started out as anti-big business, anti-middle class, anti-capitalist and anti-Communist with only a relatively tangential focus on anti-Semitism.  For all of their efforts in the first decade of their existence the Nazi party attracted few adherents.  It was only in the early 30’s when they began to gain real traction, using the economic ruin brought on by the Treaty of Versailles and the Great Depression to gain power. While nationalism and anti-Semitism were always part of their agenda, it was the post war economic disaster that was the golden ticket for a party who argued the Germans were suffering under the boot of oppression.  The Nazis promised to remove the shackles of Versailles, reenergize the German economy and as a result in 1932 they won the largest number of seats in the Parliament.  Leveraging this position Hitler was appointed chancellor in 1933.

Once in power, the gloves came off.  The Reichstag fire in February 1933 was used as a premise to target political opponents and curtail civil liberties.  A month later Parliament passed the Enabling Act which allowed the cabinet to make laws with no parliamentary oversight.  In June of that year opposition parties were outlawed and in December the lines between party and government were erased.  In January of 1934 the last vestiges of opposition was eliminated when states lost their voice in government.  So in a period of less than two years the Nazi party went from a fringe party to having a stranglehold on the government and the people of Germany.  It was then that they unleashed their heretofore relatively subdued anti-Semitism.  From boycotts to book burnings to de facto discrimination to de jure separation via the Nuremberg laws and finally, the Final Solution.

We can be almost sure that if we asked any German in 1932 would it be OK to gas and murder Jews, they would most certainly have said no. But within two years Jews would officially be defined as a different, inferior race, had their political and economic freedoms curtailed and within a decade millions would be dead.

As Martin Niemöller suggests in his 1946 poem “First they came…” the Nazis were able to accomplish their goals by taking baby steps of oppression with little discernible pushback from a willfully gullible public. 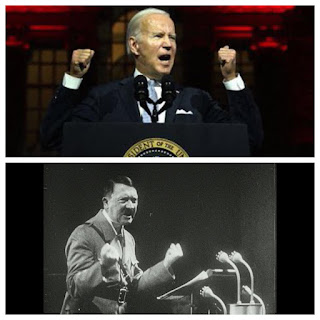 And so it is that we find ourselves in America in 2022 with fascism ascendant. And unlike what the media would like you to believe, it’s not Donald Trump who’s leading the parade.  For just over two years we’ve seen the evil of fascism take hold in the United States like it’s never held sway before.

In the summer of 2020 Democrats rained hell down on American cities and citizens, by allowing and encouraging and funding urban terrorists to destroy private and public property, attack citizens and the police and kill dozens of innocent victims.

In 2020 and beyond, after years of watching Democrats assail our election system, when anyone questioned the highly unlikely outcome of the 2020 election they were branded as anti democratic conspiracy nuts and accused of supporting insurrection.

The relatively small riot that occurred on January 6th 2021– primarily involving those who questioned the 2020 election outcome – was labeled an insurrection and hundreds of citizens who had been welcomed into the US Capital or standing on its grounds were arrested, labeled as terrorists and thrown in solitary confinement for months without charge or bail.  At the same time there are a number of provocateurs who seem to have been involved about whom the FBI is stunningly disinterested.

Illegally politicizing the Department of Justice, for the following 18 months the Biden administration and Democrats used the pretense of the “insurrection” to harass, intimidate, arrest and jail members of the former president’s administration, legal team and supporters.  This harassment eventually led to the unprecedented step of the Justice Department and the FBI raiding the home of the former president and future presidential contender.

Beginning in 2020, in response to the Corona virus, states and municipalities across the country (mostly run by Democrats) instituted draconian lockdown edicts that eviscerated individual rights, destroyed small businesses and ostracized or arrested individuals who resisted. Simultaneously teachers’ unions nationwide forced the shutdown of schools, leading to extraordinary declines in student learning and dramatic increases in youth depression. Those seen questioning the efficacy of or the damage from such lockdowns and shutdowns were seen as enemies of the regime and were subsequently silenced as the administration covertly worked with social media companies to silence and deplatform them.

The Biden administration issued mandates for rapidly developed vaccines of dubious efficacy and unknown danger and then proceeded to coerce private enterprises to enforce said mandates.   Questioning that policy or non acquiesce with it was seen as a proxy for opposition to the regime and livelihoods were threatened and destroyed.

Inserting themselves into the localist of government activities, school boards, Americans who stood up and voiced their opposition to their children being exposed to sexualization in schools or accused of being racists because of the color of their skin have been branded as terrorists by the Justice Department.

All of this threatening, intimidating and jailing of the opposition set the backdrop for Joe Biden’s extraordinary speech last week where he stated:  Donald Trump and the MAGA Republicans represent an extremism that threatens the very foundations of our Republic. This was not a campaign speech, this was the President of the United States addressing American citizens… and he called 71 million of them terrorists.

Which brings us back to Germany in 1932.  Just as the Nazis used their toehold on power to take total control of the government and methodically use that government to first slander then marginalize then cleave from society the hated Jews who were said to be less than human, the Democrats have used their control over the media, local governments and federal agencies to take over the federal government and are now using that government to slander and marginalize and cleave from society the millions of Americans who disagree with their leftist agenda.

And these are not just idle words, Joe Biden is the head of the United States government, with all of its resources at disposal, telling 71 million Americans they are a threat to the nation. And in case anyone missed the point, after having just passed a law to hire 87,000 new armed IRS agents, the administration hired Nikole Flax, who worked with Lois Lerner at the IRS when it was targeting conservatives during the Obama administration, to run the new division.   So Joe Biden and the Democrats have just created the largest armed police force in the nation and set as its leader someone associated with the targeting of their political opponents.  Joe Biden’s words are not just words… they are threats. He paints his political opponents as extremists and then exhorts his supporters to “confront” them.  “We’re all called by duty and conscience to confront extremists who put their own pursuit of power above all else.”

None of this means that by 2025 we’ll have concentration camps filled with emaciated conservatives, but it’s not like there’s no precedent.  But unlike the Germans after 1932, Americans still have the opportunity to do something about this, to make their voices heard, to change the course of history.  This November in all 50 states there will be elections, and in most there will be a Democrat on one side and a Republican on the other.  In every single case, whether for dog catcher, governor, senator or any office in between, they should pull the GOP lever.  The GOP is far from perfect and their candidates and representatives are at times questionable, but at the end of the day, they are not Democrats.  They are not the party that is taking the country down the totalitarian path that wrought so much damage and spilled so much blood in the last century.  No, Republicans may be flawed, but voting for them will likely not be fatal to the Republic.  The same can’t be said about Democrats.

Posted by Imperfect America at 12:46 PM