Have you ever seen one of those movies where some guy lights a cigar with a $100 bill? Most of the time the character is some arrogant scoundrel who looks down with disdain upon those little people to whom $100 is a lot of money. Such a character does exist in real life, and unfortunately for you and me it’s not his money burning… it’s ours. Every year American citizens are forced under the threat of prison to essentially set fire to $300 Billion. And it’s not some rotund character with a top hat who’s directing the fire, it’s Congress and the 60,000 page IRS Tax Code.

According to the Tax Foundation, (here and here) Americans spend approximately $300 Billion a year complying with the federal Tax Code. That does not include the taxes themselves, nor the costs borne in adjusting their business operations to reduce the negative impact of the Code in the first place. Another part of the Tax Code is the opaque nature of the individual taxes that eventually make it into the price of goods. Harvard economist Dale Jorgenson suggests that 22% of what Americans spend at retail is the cost of aggregated taxes. Now imagine, every one of those taxpayers or retailers has to try and comprehend their piece of that 60,000 page IRS Tax Code… a code that neither our Treasury Secretary, Timothy Geithner, (The guy the IRS works for!) nor Congressman Charlie Rangel (The guy who runs the committee that writes the Tax Code!) are smart enough to figure out... or that's what they claim.

Which brings me to the world’s best idea you may never have heard of… The Fair Tax. What is the Fair Tax? Basically it is a proposal where all current federal taxes: income, Social Security, Medicare, capital gains, etc… would be eliminated and replaced with a 23% tax that is added at the retail level. Below is a very simple demonstration of how the Fair Tax works. 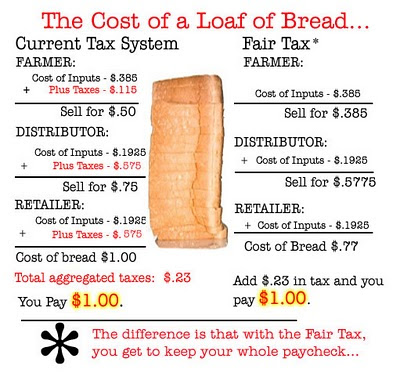 Let’s assume it costs $1.00 for a loaf of bread. According to Jorgenson, $.22 of that $1.00 represents the aggregated federal taxes paid by the baker, the distributor, the retailer and every other person who had a hand in putting that bread on the store shelf. That includes not only their taxes, but also those they withheld from the checks of employees. The bottom line for you as a consumer however is that you pay $1.00 for a loaf of bread. (For ease of discussion, i.e. eliminating taking numbers to six decimal points, throughout this piece I use the Jorgenson’s 22% and the Fair Tax’s 23% interchangeably.) Under the Fair Tax, all of those aggregated taxes would be eliminated. As a result, the cost of the loaf would be 77 cents, a number which includes all of the inputs and profits from the Farmer, Distributor, Retailer etc. When 23 cents of taxes are added to that $.77, the price of the loaf of bread for you is the same, $1.00.

Given the fact that the price of the bread stays the same and all of the players who are involved in putting the bread on the shelves are making the same amount of money, one might ask “What’s the point?” Well, there are actually quite a number of them, not the least of which is the fact that you get to keep 100% of your paycheck. Under the current system, when you earn $100, you get a check for $75. Under the Fair Tax, when you earn $100, you get a check for $100. Below is a list of ten great reasons to implement the Fair Tax:

You get to keep 100% of your paycheck – although some states have state income tax, your check would be 100% free of federal government taxes.

In this difficult time, when unemployment is officially at 10% and is likely much higher, there is no single thing Congress could do that would more effectively spur investment in the United States economy. This change would motivate American corporations and individuals who have trillions of dollars in unrealized profits outside the country to repatriate those dollars. Simultaneously it would induce investors and corporations from around the world to invest in America (and her people) because they would be able to keep more of their profits relative to any other country on the planet.

Most employment in the United States is driven by small businesses. Most of those small businesses are owned by individuals who report their income on their personal tax forms. By removing that 22% tax liability and allowing the most entrepreneurial amongst us to keep more of the money they earn, the more motivated they are going to be to invest in their businesses and grow their workforces.

Remove Congress’s ability to manipulate the tax code in order to punish particular industries, give favor to pet projects or to simply increase member’s individual and collective power.

5. Save Half a Trillion Dollars Per Year:

In possibly the single biggest shot in the arm of the American economy, the Fair Tax would allow individual taxpayers and businesses of all sizes to save the collective $300 billion dollars per year they pay to accountants and consultants in order to comply with the IRS Tax Code.

The Fair Tax would allow consumers and businesses make financial decisions based on what is best for them, their families or employees as measured by objective factors such as cost, aesthetics or efficiency rather than on how it will impact their taxes. This would involve everything from buying large ticket items such as cars or office equipment to deciding what industries to invest in or expand into.

As efficiency returns to the market and more entrepreneurs are motivated to start businesses, competition will increase, which leads to more innovation and lower prices. For consumers that will mean that not only will they be able to keep more of their money, but eventually that money will go farther due to lower prices and better products.

Collect taxes from those in the underground economy who currently pay little or no taxes such as drug dealers or employees who are paid in cash.

Does this need any elaboration?

The Fair Tax is not a panacea. It will not solve all of America’s problems; it won’t cure cancer or eliminate war or the vagaries of the business cycle. Nor is it without debate, as can be seen by the fact that it has been attacked by players as different as the The Wall Street Journaland the not always so factual FactCheck.org.


Nonetheless, the FairTax does some important things. First, it put’s the United States on the strongest footing possible to compete on the global stage by spurring productivity across the spectrum of business and society. Second, it frees up individuals and businesses to focus 100% of their attention to starting and expanding their businesses in the most effective and efficient ways possible. In doing so they will drive employment and spur our economy. Thirdly, and perhaps most importantly, it would be the first step in reigning in the imperial federal government. By removing the exigencies forced upon them by the leviathanian Tax Code they created, and eliminating Congresses’ ability to manipulate that code, we would be taking the first step in returning America to its true foundation. That foundation is an understanding that the primary function of government is to guarantee its citizens’ freedoms and give them an opportunity to pursue success and happiness unfettered by the tyranny of an oppressive state. That alone would be make the Fair Tax a worthwhile endeavor.
Posted by Imperfect America at 6:57 PM