My undergraduate degree is in Political Science, but like so many others my actual job experience has had little to do with my major. For years I paid scant attention to politics. During the 90’s I remember watching Waco, the Oklahoma City and first WTC bombings and wondering what the hell was going on. I didn’t really pay enough attention to Bill Clinton to have an opinion one way or another. I believed him when spoke directly to me (via that live press conference) and waved his finger saying “I did not have sexual relations with that woman”. Discovering I was a patsy was not enough to get me moving. Other things caught my attention like the FLAN pardons and the 2000 election, but largely I was on political auto-pilot with little direction or concern.

Two events began to change that. September 11th and getting married. There is nothing to focus one’s attention on the things of value in your life as the possibility of losing them. On September 11th the precarious nature of everything came into view. I started reading about politics again as well as an area of the world to which I had not given a great deal of thought up until that point. Everything from Bernard Lewis’s What Went Wrong? to Mona Charen’s Useful Idiots to Dinesh D’Souza’s What’s so Great About America to Philip K. Howard’s The Collapse of the Common Good. I felt like I was getting educated again, despite the obvious and growing danger I still didn’t actually do anything. While energized in mind, I spent my days struggling to get one of my entrepreneurial endeavors off of the ground, rationalizing that if I could build a successful business I could impact more people than I could individually.

Getting married increased the speed at which the mental wheels turned, but again, not so much with action. My wife is from France, and she lived when we decided to get married. I called the USCIS (INS) to see what I needed to do. They said fill out forms A, B & C, do this and that and she should be in the country in 3 months. We were married in June of 2004 and filled out forms A, B & C and did this and that. When nothing happened by the next January, my wife, still living in France, said we get a lawyer or a divorce. We got a lawyer and 3 months later she was here and legal. With that experience my journey towards becoming a diehard conservative with libertarian leanings picked up steam.

Feeling like Russell Crowe’s character in A Beautiful Mind, suddenly everything seemed to come into focus. Where before sat disparate bits of information, now patterns emerged. It was clear, the government was so busy doing so many things for us (and to us) that they didn’t have time to do the things they were supposed to be doing in the first place. They were focused on forcing banks to make bad housing loans when they should have been making tax policy understandable to those who are compelled to obey it. They were busy shoving inflation inducing, environmentally ambiguous ethanol into American gas tanks when they should have been cutting red tape so companies could drill for oil or build new refineries. They were busy expanding the welfare state rather than creating an environment where businesses could create jobs and incomes that would obviate the need for a cradle to grave welfare state in the first place. And there was never the nerve or money to secure the border. Everywhere you looked they were meddling where they had no business and failing at those things the Constitution required of them.

I entered 2009 with a heavy heart. It sank on election night 2008 and remained submerged for months. The reason it sank, and, oddly enough, the reason it’s resurfaced are the same: Barack Obama. I knew going into the election he was a disaster in the making but I foolishly assumed Americans would not put an inexperienced, economically illiterate, statist in the White House. I was wrong.

It turns out however, all may not be lost. It’s said after all that it’s always darkest before the dawn. This President has veered so far to the left that he has had startled the American people out of their collective stupor. He has sewn the 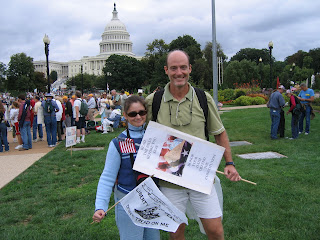 seeds for an American redemption. Drunken with hubris from knowing they no longer had to feign bipartisanship, the President and Nancy and Harry and Barney demonstrated in crystal clear terms exactly what they want to do to America. But a funny thing happened on the way to the gulag… Americans remembered that Communism, socialism and statism don’t work and said they want no part of them. I went to the Tax Day Tea Party in Atlanta and the 9-12 Project in DC. In neither case did I see people protesting for government handouts, for government to provide them with protection from this evil or that danger, or for government to take something from their neighbor to give to them. Instead I saw people protesting for the government to get out of their lives, to let them keep the money they earned – or most of it, and to let them live as free men and women. They wanted to be free to pursue happiness rather than have the government’s version of it foisted upon them.

While it may sound preposterous to suggest that one can discern Barack Obama’s legacy in January 2010, I feel confident in doing so. He has provided a face, a symbol for the leftist statist cancer that has been slowly metastasizing through the American body politic for the last fifty years. Much in the way that Pearl Harbor focused America’s attention on the task at hand and resulted in the Greatest Generation winning the War and building Pax Americana, it is possible that Barack Obama is playing the role of Admiral Yamamoto in this battle and that Americas, woken from their lazy stupor, will respond by taking back control of their government and their lives. Only time will tell, but I can say that he and the Democratic cabal that now control the government have sufficiently energized me to stop doing nothing and start doing something. Thus far I’ve started this blog, began talking to people and have begun giving speeches on the Constitution. They are not much, but they are a start. Somehow I think I’m not the only one.
Posted by Imperfect America at 6:27 PM