Wouldn’t life be grand if it could show you exactly what your future was before you lived it, thereby giving you the opportunity to make adjustments before that reality played itself out? Imagine what you could do. You could turn Vegas into your own private ATM. You could learn all the answers to the questions on Jeopardy – is that show still on the air? If you were Eliot Spitzer you could have chosen to pay in cash rather than by money order… 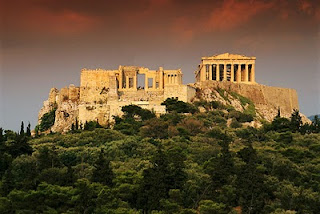 Unfortunately life doesn’t typically do that. But sometimes we can get the next best thing. See what is happening to someone else and decide if we want to go down their path and share their fate.

Such is America’s situation today. Life has opened up a little window and shown us exactly what lay ahead in our future if we continue down our current path. In that magic window showing our future you will see Greece, the wellspring from which Democracy first flowed.

Today Greece is the basket case of the European Union. Its economy is anemic, it’s forced to pay twice the market rate to sell its bonds and unions are striking across the country. Earlier this year financial markets around the world (and the Euro) took a dive due to the concern that some sovereign states would not be able to repay their debt; Greece was at the top of the list. The country is an economic disaster. Its budget deficit is 12.7% of its GDP. It has a national debt of $395 Billion, which might sound pretty good compared to the US, but it represents about 120% of GDP. A quarter of the population works for the state. The government share of the economy is 52% and the remaining 48% is so rife with corruption and red tape that it’s becoming almost impossible to open a new business or to keep one operating. As if all of that were not bad enough, in the midst of the world’s lending crisis, it must refinance $75 Billion of its debt within the next 12 months. 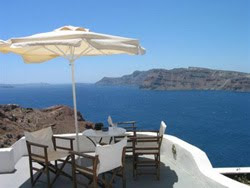 On the positive side of the ledger for Greeks, they get 14 months of salary for 12 months of work and they get to retire in their late fifties. Oh, and they get to live in one of the most beautiful places on the planet.

While Greece is ostensibly a free market economy, in reality there is little freedom to be found. In the CATO Institute’s 2009 Economic Freedom of the World it came in 52 out of 141 countries, coming in just below Zambia, Botswana and the home of the fictional but funny Borat, Kazakhstan.

Fundamentally the problem in Greece is that the taxes are too high – which has driven 1/3 of the economy into the untaxed black market – state benefits are too generous and the government involvement in the economy is strangling what little private sector remains. Does any of that sound familiar?

In order to secure guarantees of assistance from the economic grown ups in the EU, Greece has had to begin to cut back benefits and services and raise taxes even more. The not surprising result has been paralyzing strikes across the country where unions are shutting down schools, airports and hospitals. The country is now between a rock and a hard place: Continued profligate spending (in which case they might be kicked out of the Euro zone) or implementing the austerity measures required to bring the fiscal deficit down to 3% from its current 12.7%. In either case the prospects do not look good. In a country where political stability is not exactly a time honored tradition, the ramifications from either path are likely heavily weighted with chaos and widespread civil unrest.

Today, in the very place from which Democracy emerged, we are seeing the ugly head of the medusa it can morph into when it becomes unchecked and unhinged:


This piece would retain most of its accuracy if you replaced every instance of the word Greece with the United States. This is indeed one of those rare moments in life where we get to see our future flash before us before it actually happens. As we watch the cradle of Democracy spin out of control and potentially become a failed state, a banana republic on the front steps of the European Union, we should keep in mind that this problem did not occur overnight and was the result of a citizenry demanding ever increasing handouts and Pollyanna politicians who could never summon up the courage to say no.

Like Ebenezer Scrooge in Dickens’ A Christmas Carol, we’ve been shown the Ghost of America Yet to Come. The question is, are we content to continue down this road so that the United States becomes just another failed state with an untended headstone in the graveyard of once great civilizations or are we going to leap from our beds, rip from their hinges the red rose colored windows of Progressivism that have been choking off the sun’s light and proclaim to the citizens of the world that we have decided to change our ways and that freedom and economic liberty will once again become the hallmarks of the American Experience. If we do, not only may Tiny Tim find a bounty on the table on Christmas morning, but eventually some inventor, entrepreneur or doctor operating in the free market may figure out a way to give him back the gift of his health so that he may be saying “God bless us, every one!” for many Christmases to come.
Posted by Imperfect America at 5:49 AM