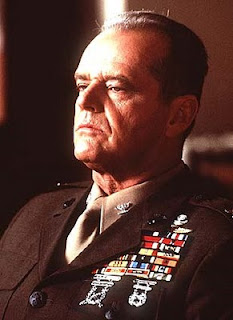 With all of the rancor in the media, online and on main street, it might be easy to forget why we are talking in the first place. The fundamental reason the level of discord has risen to where it is is because the number of people who are recognizing the threats to their liberties from the progressive agenda are growing every day, and they are starting to talk about it. Such conversations rarely occur in a library tone.

The response of the newly aroused polity reminds one of that great scene from the movie “A Few Good Men” where Jack Nicholson is on the stand and responds to a badgering Tom Cruise:

“Son, we live in a world that has walls, and those walls have to be guarded by men with guns. Whose gonna do it? You? You, Lt. Weinburg? I have a greater responsibility than you could possibly fathom.... You have the luxury of not knowing what I know. That Santiago's death, while tragic, probably saved lives. And that my existence, while grotesque and incomprehensible to you, saves lives. You don't want the truth because deep down in places you don't talk about at parties, you want me on that wall, you need me on that wall.”

“I have neither the time nor the inclination to explain myself to a man who rises and sleeps under the blanket of the very freedom that I provide, then questions the manner in which I provide it. I would rather you just said thank you, and went on your way, Otherwise, I suggest you pick up a weapon, and stand a post. Either way, I don't give a damn what you think you are entitled to.”

While not a perfect segue to the current discussion, it's a great quote and it opens the door in that the success the United States has engendered, both at home and abroad, has provided an umbrella of prosperity under which progressives feel sufficiently secure that they can turn around and attack its very foundations. As a result of that attack, much of the country has awoken to the fact that the success of nations is not preordained and that the unique set of ideas that have made America such a beacon of freedom and prosperity are not set in stone, and are in fact in peril. It's that newly awoken spirit that has fueled the Tea Party movement.

While the media portrays the Tea Party participants as anti-government zealots who don’t want to pay their fair share, there is little to support that caricature. They simply recognize that the continuance of everything that Americans hold dear, from the consequential – such as freedom of speech, economic liberty and a right to property; to the inconsequential – the iPhone, Facebook or the Snuggie, are threatened by the progressive Lt. Weinburgs who assume the wonderful world they live in was created magically out of sugar and spice where everyone plays nice and the planet turns on its happy axis. The discussion we are having today across the country is occurring for the simple reason that much of the citizenry has come to recognize that Ronald Reagan was indeed right “Government is not the solution; Government is the problem.”

It is in that context that Barack Obama has started this firestorm by pulling back the curtain to reveal the true progressive agenda: Government control of the economy, and with it control over its citizens. Content with their 500 cable channels, a bounty of food options, an infrastructure that largely functions and a plethora of government band aids to cover every minor scrape, Americans had largely become a torpid bunch in terms of paying attention to the underpinnings of their prosperity. The progressive agenda had been advancing inch by inch for most of the last century with few people other than Reagan seeking to beat it back. Had McCain won in 2008 we would likely have remained on that same slow train. Instead Barack Obama pulled back the lever and put progressivism into overdrive.

Frankly, it was not the progressive direction that awoke the citizenry, but sudden acceleration. Fortunately for America, Barack Obama is more wedded to his ideology than his legacy. In some respects he’s a lot like the Communist Party USA in the 1970s. If their true agenda was to see socialist parties enacted in the United States, they would have supported the Democratic nominee. Instead they always ran a candidate who stood on their platform and never had a chance to win. Obama of course doesn’t share the problem of never winning, however in the long run he will likely share their record of failure. If he had just governed from the center he would likely have already accomplished many of the things he wanted, without waking the American polity out of their decades long stupor.

Americans are many things, but suicidal is not generally one of them. Although many of us have known for a long time the truth about what makes America great –economic liberty, entrepreneurial fervor, individual freedom and an expectation of exceptionalism – it has taken Barack Obama and his Democratic Oompa Loompas shoveling massive amounts of coal (sic) into the engine of the progressive train to wake much of the rest of the country to what has been going on. As a result, the discussion around the water-cooler on any given morning is no longer about who was kicked off American Idol the night before, the picture of Tiger Wood’s latest paramour or what crazy thing Lindsey Lohan will do next; rather, people are discussing taxes, the Constitution and who’s running for Congress. While I may despise everything that Barack Obama and his minions have done and are trying to do, I’m grateful they have become the catalysts for bringing about the discussions Americans are currently engaging in; conversations we should never have stopped having in the first place.
Posted by Imperfect America at 3:38 PM