Dealing from the bottom of the deck

Sixteen months into the Obama administration and we have a great picture of how they operate. The words that come to mind are Devious (Not straightforward; shifty or crooked: a devious scheme to acquire wealth or power.) and Unctuous: (Characterized by excessive piousness or moralistic fervor, esp. in an affected manner; excessively smooth, suave, or smug.) They make perfect bookends for the Obama playbook. Every 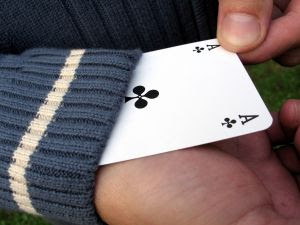 administration has certain things it wants to accomplish and uses all of the legal tools at its disposal in order to accomplish them. Those are consequences of elections. This administration however, not only uses all the legal tools at their disposal, beyond that they seek to circumvent any Constitutional roadblocks that might be standing in their way by using the coercive power of the state. Here are just a few of their greatest hits:

General Motors: The first example, and perhaps most egregious of them all, was the forcing of an agreement down the throats of the General Motors (and Chrysler) bondholders so the president could repay his union supporters. For thirty years the UAW (with the support of Uncle Sam and the acquiescence of dunderhead Big Three executives) slowly wrapped their coils around the neck of the American automobile manufacturing, eventually cutting off all air. From contracts that paid workers for not working to platinum health insurance plans (that made GM the number one Viagra customer in the country) to work rules that left manufacturers with no flexibility to adapt to a changing marketplace, the unions are primarily (although not exclusively) responsible for the sorry state of Detroit – both the city and the Big Three. After the unions destroyed the company they went crying to Washington for help, and the Obama administration was only too happy to help. Rather than letting the parties resolve their problems by evenhanded, traditional negotiation, the Obama administration literally stole money from GM bondholders and gave it to the United Auto Workers. Presto! The company flies through bankruptcy and emerges with a new slate of owners (primarily the US & Canadian govts. and the UAW). Heretofore one would have to go to Venezuela or Russia or some banana republic to find such thuggish behavior by a government. Imagine the impact that government shredding of the rule of law has on companies seeking to start businesses or bring jobs to the United States…

One might be inclined to think of this coercive use of government power as an aberration. Alas it’s not even close.

Cap & Trade: Cap & Trade is the left’s top wish for environmental control over every aspect of American life. Fortunately for America, Cap & Trade hit a brick wall in Congress last year. While the House of Representatives passed its bill, it became clear early on that it had almost no chance in the Senate. Rather than shelve the job killing proposal, the Obama administration took a different tact. In December they sought to intimidate the Senate into passing the bill by announcing that in the absence of such a law the EPA might begin regulating CO2 emissions (yes, the stuff we exhale). When it became clear their intimidation would not overcome a Republican filibuster, they carried out their threat. Less than two weeks ago the EPA issued their first regulation. They will begin by regulating only entities emitting 100,000 tons or more a year would be affected. (To put this in some perspective, a ton is equal to 2,000 lbs and humans exhale about 750 lbs of CO2 per year.) That number seems high now, but so did $250,000 when President Obama promised no one under that threshold would see an increase in taxes. Eventually that number will drop so that at some point the EPA will be deciding how cool you can keep your house, how long your driveway can be or how many cookouts you can have a year. Don’t think so? Remember, when the 16th Amendment (income tax) was passed in 1913 the highest tax bracket was 2%. By 1980 it was closer to 90%. This EPA action was another example of the Obama administration using coercion to impose their progressive policies on the country. Here too the impact will be felt by investments not made and jobs not created by individuals and companies who are seeking to do operate without bureaucratic strangulation.

Broadband Regulation: Earlier this year the a federal Appeals Court decided that the Federal Communication Commission did not have the authority to regulate broadband Internet offerings, seemingly dealing a death blow to the left’s Net-Neutrality dreams. Rather than appealing the ruling or seeking explicit powers to do so from Congress, the Obama administration choose to change the rules. The FCC Chairman Julius Genachowski decided the way to proceed was to reclassify broadband from a lightly regulated “information service” to a heavily regulated “telecommunications service”. Voilà, magically Net-Neutrality is back on the table. The implications are bleak. Think back where the Internet was in 2002 when the FCC first designated broadband as an “information service”. Ungodly slow dial up access, no Facebook, no YouTube, no Skype and no Netflix on demand. Had the FCC been in charge of broadband for the last decade, AOL would still probably be a viable company. Broadband investment is extraordinarily expensive and there are no guarantees of making a return. The Obama administration has just made investments in the area that much more expensive by making it that much harder for companies to make a profit on those investments.

Financial Regulation: Finally, in only the latest example of the thuggish tactics of this administration, Congress is on the verge of passing a wide ranging financial regulations bill that will cover everything from derivatives to ATM fees. This alone does not exemplify thuggish behavior. What does however is the SEC’s providentially timed indictment of Goldman Sachs for misleading investors in one of its investment vehicles. The indictment was perfectly timed to give the President a spit upon which to roast Wall Street in the eyes of the public. Only by diverting the attention from the primary role he and his fellow Democrats played in the economic meltdown could he hope to pass such a wide ranging piece of legislation that seems to give the government the power to shut down virtually any company with even the most tenuous connection to the finance industry (like taking payment in the form of US currency perhaps?) yet somehow leaves out the biggest criminals in the meltdown story… Fannie Mae & Freddie Mac.

But as bad as the legislation is, it’s not the bill that’s thuggish, it’s the using of the police power of the SEC to create the illusion that this regulation was necessary. To put this amateurish indictment into perspective imagine this: You live in Indianapolis (where we’ll pretend gambling were legal and you own a casino) and a customer named Bob comes up to you and says “You know, I think the Saints are going to win the Super Bowl next week. Do you have anybody who wants to bet against me?” You say “Sure.” You publicize that anyone who wants to bet on the Colts should come and see you. Some customers come in and are so sure the Colts will win that they offer to pay 20:1 if the Colts lose. You set up the bet and the game is played. When the game is over and the Saints are victorious, the Colts fans have to pay $20 for every dollar Bob had bet. In this scenario you and your casino are Goldman Sachs and the SEC has just charged you with somehow cheating the Colts fans. Not for fixing the game, not for implying a Colt’s victory was a sure thing, but because you didn’t tell them Bob’s name.

That was the foundation of the Obama administration’s claim that Wall Street is the cause of the financial meltdown and the country must have its labyrinthine 1,300 page regulatory bill. Many analysts believe that this case will be thrown out before it ever gets to trial or will be handily lost if it ever makes it that far. None of that will really matter because the real purpose of the case was not to punish Goldman Sachs for some bad behavior. Rather it was to set a stage upon which President Obama could decry Wall Street in pursuit of his latest yoke on the backs of American businesses. This will likely end up as just another nail in the coffin of the American marketplace, financial and otherwise.

There are more bad surprises ahead from Obama and company, from the actual implementation of ObamaCare to a plethora of federal judgeships to a new and improved “Fairness Doctrine”. The question one has to ask after 16 months of the Obama administration is not whether the Republicans will make gains in the House and Senate in November, but rather how much of our economy and our freedoms will be left when they do and will it be too late to save the American experiment?
Posted by Imperfect America at 3:28 PM