There are some things that are true regardless of what anyone tells us. OJ Simpson’s actual guilt at killing two people in a Brentwood doorway was not impacted by whatever verdict the jury might have returned. Armando Galarraga pitched a perfect game regardless of the call Jim Joyce made. Socialism and statism are destroying the United States, regardless of what Democrats, progressives or anyone else tells you. Not that it matters a great deal in the end, but there is a distinction between the two – socialism & statism. Fundamentally socialism seeks state ownership of the means of production and distribution of goods and services. Statism seeks government control over the same and more, only without requiring state ownership. Both are fatal for a dynamic economy and increasingly in the United States we are experiencing more of both. Does any of this matter? Only if you want to have a country that has dynamic economic growth and living standards that move in a positive direction. Government may be good at creating jobs, but the kinds of jobs it creates are anything but dynamic and add little to the growth of the economic engine that drives an economy. Think about the things that have changed your life over the last quarter century. What names come to mind? Apple, Microsoft, FedEx, Wal-Mart, Google, Southwest Airlines, DirectTV, CNN, Marriott, Drudge Report, eBay, Rush Limbaugh, Toyota, Dell, Starbucks, Amazon, Facebook, Home Depot, Pixar, Outback Steakhouse. Like them or hate them, while some may have had more of a direct impact on your life than others, all are associated with organizations that have brought innovation in goods or services to much of the population across the country. Most are highly profitable and employ thousands of people. Now think about areas of government involvement over the same period and what comes to mind? Post Office, Amtrak, IRS, Social Security, Medicaid, Medicare, education, immigration. How do they perform? And those are just areas where the government has direct control. Think about the areas where they have significant indirect control such as healthcare, energy and financial services. While there may have been some advances in these areas, the trajectories are far different than the first list above.

Telephony makes a great metaphor for our larger economy. For almost 100 years there was essentially one phone company in the country, AT&T, and you would not exactly call Ma Bell a great innovator. The phone you had in 1982 when Judge Green decided to break up AT&T’s (government sanctioned) monopoly was probably not much different than the one you might have had 40 years before, except the rotary dial model may have been replaced by a push button model. It was only when the government decided to take a step back (or ½ step as the case might be) from the regulatory stranglehold it had on telephony did the choices of providers, features and platforms skyrocket to where they are now. 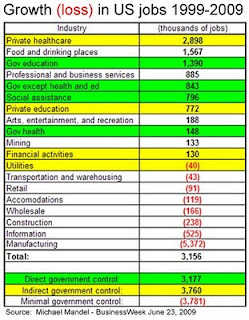 America is in the process of reversing our experience with telephony, only on a much larger scale. The continuation and acceleration of government intervention in our economy portends an America in decline. While an economic collapse is not written in stone, the concrete is quickly hardening as we increasingly come to resemble the failed socialist states of Europe. Nearby is a table from May of 2009 that looks at job creation for the prior decade. The numbers are staggering. Literally, every single one of the 3 million net new jobs came from government programs. In areas where government exercises direct or indirect control there were 6.9 million jobs created and in areas where the government exercises relatively little control there was a net loss of 3.7 million jobs!

The problem with those numbers is that it is innovation that drives economic success and those jobs do not innovate. (Although it was DARPA who started the Internet, it was private companies who did the yeoman’s work of building and developing the infrastructure and content that has made the web so successful.) The typical government employee spends their time shuffling and filing paperwork, expanding red tape and enforcing regulations, attempting to educate students and mailing checks to the tens of millions of Americans whose income is dependant on government welfare. They are not inventing new types of fuel, developing medicines cutting edge computer programs, creating and marketing new Internet offerings, starting the next McDonalds or even inventing the next Snuggie, ShamWow or George Foreman grille.

And the government jobs are only half the problem. The other half comes from the ever increasing regulation of the private sector. Be it automobiles, healthcare, finance or soon to be restaurants, companies in heavily regulated industries can hardly make a move without first getting the approval from the government – often from numerous agencies. This can be even more onerous than actual government control over an industry because in this type of a situation the government doesn’t even have to pretend to try and figure out how to pay for whatever regulations they write. They simply issue and edict and the corporations must comply. Here again, government intervention greatly distracts corporate America from doing what it does best, which is innovating and finding the best possible manner in which to serve their customers and earn profits for their shareholders.

Virtually every single thing that turned the United States into the greatest economic engine in human history came as a result of private companies pursuing private opportunities. Sometimes those pursuits flamed out like the Tucker automobile, FedEx’s Zapmail, Motorola’s Iridium or Pets.com. Often enough however some entrepreneur or company takes a leap of faith that ends up not only succeeding, but ends up surpassing their greatest expectations: Howard Johnson during the Depression, Ray Kroc bringing the McDonalds Brother’s ideas to the whole world or Jeff Bezos thinking he could sell books online. To the degree that government at all levels strangles the economic engine that has powered our success, we can look forward to a diminishing future and an economy that is less able to respond to the needs of the citizenry, less able to provide revenue for the constitutional functions of government, and perhaps most despairingly of all, fundamentally incapable of advancing the human condition… other than the conditions of the bureaucrats who will run everything.
Posted by Imperfect America at 1:52 PM