Iraq will be Barack Obama’s Vietnam

Iraq will become Barack Obama’s Vietnam. Not in the boogieman sense that the left has been using the Vietnam War for the last 40 years where every American use of force is the “next Vietnam” but rather in its aftermath.

The Vietnam War ostensibly ended in ended in early 1973 with the signing of the Paris Peace Accords. The agreement was based upon an agreement by all sides to stop hostile activities and for American troops to depart. The Americans would continue to supply the South Vietnamese military. In addition, the SVN leadership was explicitly assured that were the North Vietnamese to resume hostilities the United States would begin bombing Hanoi and other targets in the North.

Unfortunately for the South Vietnamese, the promises of arms and support were mirages. In 1974 Congress cut military aid to Vietnam from $2.3 billion to $1 billion and then in 1975 to $300 million. Thanks to the Democrat’s Case-Church Amendment, when the North had resupplied and resumed hostilities, the promised US bombing never came. In April 1975 Saigon fell and the South surrendered.

Then came the nightmare. Upwards of a million South Vietnamese found themselves in prisons, “re-education camps” or other tropical outposts where they were treated to starvation, torture and murder. Hundreds of thousands more braved the oceans in order to escape, a quarter of them never reaching shore. The effects of this nightmare reached into Cambodia and Laos as well.

And now there is Iraq.

The war in Iraq was obviously far different from the one in Vietnam. Unfortunately however, the aftermath may be similarly unpleasant. 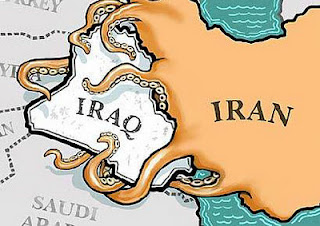 While Iran will not invade Iraq anytime soon, the country could still become a vassal of the ayatollahs. If Iraq escapes that fate it may well collapse into a civil war that eventually draws not only the involvement of the Iranians, but of the Saudis, the Turks and other neighbors as well. Oh, and, yes, perhaps eventually the Americans again.

However one feels about the war in Iraq in the first place, the manner of the exit ensures one thing, that the American blood and treasure spent toppling Saddam Hussein and seeking to establish a viable democracy in the Middle East will likely be for naught.

Not that Saddam Hussein will be coming back anytime soon, he won’t… but the country he once ruled will likely become a basket case or a failed state.

The writing on the wall has been there for years. Candidate Obama had been a critic of the Surge and President Obama’s only priority in Iraq seemed to be leaving.

Iran was paying close attention. Although they had been heavily arming insurgents and Shia militants during the dark days of 2005-2007, by 2009 their efforts had largely been defeated with the establishment of a fledgling but credible Iraqi government infrastructure.

However, the national elections of 2010 opened the door to Iran once again. Barack Obama was inexplicably a proponent of a laissez faire policy in reference to the dysfunction in the formation of the Iraqi government following the 2010 elections. To anyone looking (and there were many) it was clear that the United States was disengaged and focused on wrapping up the operation.

Such chaos invites the efforts of a strong horse. Iran was willing to play. With an ambiguous constitution and a Chief Justice carrying Prime Minister Maliki’s water, the Iranians became the power brokers behind the new government, forcing Mr. Maliki into a coalition that included the Sadrists, erstwhile insurgents led by cleric Muqtada al-Sadr. This was only possible because of the vacuum left by the Obama administration. Had the Iraqis been confident that the United States would be standing with them until they could stand on their own, there would have been no vacuum for the Iranians to fill.

As things stand today, Iraq sits on a precipice of disaster. Within the last three months terrorist attacks have increased, sectarian infighting has escalated and two of the country’s eighteen provinces have sought semi-autonomous status, seeking to enjoy the autonomy the Kurds enjoy. Other provinces will surely follow. For a country with a weak central government and deep divisions amongst its population, such a centrifugal force is not exactly helpful. This will be particularly problematic as the national government seeks to collect and distribute oil revenues, bolster the power grid and perform other traditional tasks. Apart from the growing separatism at the local level, the federal government is a patchwork of alliances, most of which are held together by Iranian influence. That influence comes in various forms, from their covert (but hardly secret) support of terror groups Khataib Hizballah and Asaib Ahl al-Haqq, who are not only responsible for killing US troops but for targeted assassination across the country, to their overt economic, diplomatic and religious ties. As if to put a cherry bomb on the top of this powder keg, the day after the last American troops left the country, the Shiite-led government issued a warrant for Vice President Tariq al-Hashemi, the country's highest ranking Sunni official, on terrorism charges.

Of course it did not have to be this way. American Military planners had long sought to leave a force of between 20,000 to 30,000 troops to provide continued security, run counterinsurgency operations and to focus on training of the Iraqi military. Most analysts believed that number was the minimum number necessary to maintain many of the hard fought gains won over the last four years.

While 20,000 troops may sound rather small in terms of maintaining gains achieved in a country of 30 million people, the message they would have sent to the Iraqis, and equally importantly, to the Iranians, would have been crystal clear: The United States will not allow a democratically fragile Iraq to become an battleground of the Middle East or an Iranian puppet.

That however was never Barack Obama’s message. His campaign would later reveal his message: “Ending the War in Iraq: A Promise Kept”

For some perspective, one might observe that leaving sizable troop levels in a theater for a period of time after a conflict in order to maintain hard fought gains is nothing new. A quarter century after the end of WWII there were 260,000 American troops in Germany and today, sixty years after the Korean War there are 30,000 US troops in South Korea. Obviously the Korean peninsula and Western Europe are different than Mesopotamia, but the notion remains that leaving troops to midwife a long term positive outcome is far from foreign. At least to most people not named Barack Obama.

Instead, the message the Iraqis and their neighbors received from the United States was one of detachment driven by a President with little interest in anything other than ending “Bush’s War”. Whereas Bush talked with Prime Minister Maliki on a weekly basis, President Obama spoke with him rarely and not at all between February 13 and October 21 of this year, critical days in the period leading up to the end of the American presence in Iraq.

After months of doing nothing the administration finally proposed in August of this year to leave 3,000-5,000 troops, far below what most believed was necessary to secure the peace. Those numbers, far too small to fulfill its mission did prove helpful to the administration however: it provided a fig leaf behind which it could hide its retreat. This fig leaf came in the form of a lack of immunity for American troops on Iraqi soil. While Mr. Maliki and other members of the government may have been willing to go to the mattresses to secure such immunity for a substantial force that demonstrated a serious American commitment to Iraq, they were not willing to do so for a token force that would provide little support or security. Even that fig leaf was too small to provide true cover because the administration could have easily put any forces in Iraq on the diplomatic rolls, which would have provided such immunity.

At the end of the day, Iraq will be Barack Obama’s Vietnam in the sense that not only will most of the hard fought gains be lost, but there will be thousands who will pay the price for his choice, starting with the innocents who will be caught in the sectarian crossfire. They will not be the only ones however. So too will a price be paid by neighbors who fear an emboldened Iran as well as freedom advocates across the region who might have sought replicate Iraq’s success and build secular, democratic governments. And then there is the world’s confidence in the United States as a long term ally in the fight for regional stability and a bulwark against Iranian intervention.

Of course all of this comes on the heels of another futile round of sanctions seeking to keep the Iranians from developing or delivering a nuclear weapon. Barack Obama has certainly conveyed a message of strength and stability to the region. “Ending the War in Iraq: A Promise Kept” Indeed.
Posted by Imperfect America at 4:31 AM