Tea Party vs. the GOP establishment - Begging for a brokered convention...

For much of the last three years, I, like so many others who were so despondent after the election of 2008, assumed that the election of 2012 was finally going to provide the American people with a real choice of philosophies.

On the one side you have President Obama and the progressive / fascist utopia. (Fascist in the economic sense – where private property remains, but government dictates its usage – rather than the Nazi anti-Semitic / nationalist sense.) This utopia is where government plays the role of caretaker of the nation, where government tells citizens what they can and can’t do with their property, what they must buy and where they must invest, where unions have the power to coerce both government officials and private corporations that pay their members salaries. 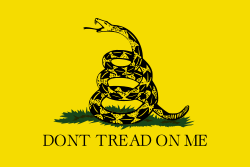 On the other side the Tea Party was going to make sure that for the first time in 30 years a conservative nominee would be the standard-bearer of the Republican Party. The platform would include radically smaller government, less intrusive government, and lower taxes coupled with a less complicated tax code – maybe even the Fair Tax – and a strict adherence to the 10th Amendment. Life was indeed going to be good again and prosperity would soon come roaring back.

Given the failure of everything progressive, from welfare to education to the USSR to practically the entire European continent, Americans would finally be given the choice between continuing down that well trod path to failure and a going down that forgotten path of economic liberty that was the foundation of American prosperity since the revolution.

Somehow, somewhere along the road leading to that fateful, Solomanic fork in the road, something went wrong. Not on the left. No, President Obama has indeed been as progressive as most of us feared, and in some cases far worse. Actually, the problem is on the right. Where many of us were hoping that the standard-bearer of the GOP would be a clean, if not perfect, conservative, increasingly it looks as if the nominee is going to be someone other than that.

In the one corner we have Mitt Romney who to this day refuses to renounce Romneycare, the Massachusetts disaster that spawned Obamacare. He also was an early supporter of cap and trade, was gullible on global warming, opposes a flat tax or the Fair Tax and shares an unhealthy affinity with Barack Obama for class warfare.

In the other corner we have Newt Gingrich, the guy who sat on a couch with Nancy Pelosi and told us to pressure our leaders to combat climate change. Although he finally admitted that was one of the stupidest things he ever did, there are other candidates for that title. He trashed Paul Ryan’s less than radical tax plan as “conservative social engineering”, supported the individual mandate in healthcare and now wants to harness local boards to determine which illegal immigrants should be allowed to pursue a “Path to legality”. I have to wonder how effective that might be in sanctuary cities around the country like San Francisco, Austin and Denver. As if all of that were not enough, after taking almost $2 million from Fannie & Freddie and praising their work and the GSE model itself, he now wants us to believe that the only thing he did for the money was tell them their businesses were going to fail. Really?

There are of course others in the race and they too are imperfect, but at least with Perry and Bachman you know they are true conservatives mostly dedicated to a smaller government. Unfortunately for the two of them, their campaigns barely register a pulse when it comes to the polls.

At the end of the day one has to ask, what happened to the Tea Party revolution? How is it possible that the two men leading the race for the 2012 GOP nomination are big government, crony capitalist chameleons who are far less inclined to upend the Washington applecart than work with the people driving it? Why are not the leading GOP candidates shouting from the rafters that they will radically slash government spending and regulation, that they will champion a flat tax and that they will impose a strict adherence to the Constitution, particularly the 10th Amendment?

Despite the best efforts of the media and the Democrats to paint the Tea Partiers as racist rubes and the Occupy Wall Streeters as noble sophisticates put upon by the evil capitalist system, the American people recognize the truth. The fact that the PR field is so heavily 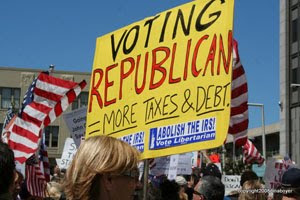 tilted towards OWS, yet citizens still have a more favorable view of the Tea Party, tells you everything the GOP needs to know about the coming election. If they would simply run a candidate who proudly articulates basic conservative principles, the next election would result in the country being freed from the tightening progressive noose around its neck. Without such a candidate, with just another standard-bearer Americans can’t distinguish from the big government GOP they’ve come to know, Barack Obama may indeed triumph.

With Gingrich and Romney sitting in the pole positions, I find myself pulling for a brokered convention that results in an opening for someone other than Frick and Frack to take the nomination. Someone like Sarah Palin, or even the forgetful but conservative Rick Perry. Sure that’s an unlikely scenario, but at this point the traditional route has brought us two paper tiger conservatives leading the pack. The Tea Partiers and the country deserve an opportunity to make a clear choice between progressivism and conservatism. Let’s hope that somehow the GOP can figure out how to give that to them. Otherwise it may be another four years of hoping for change.
Posted by Imperfect America at 2:45 AM