Democrats falsely claim conservatives are racists. Let's pretend it's true... So what? 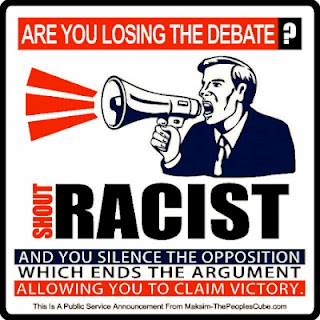 From the moment that Barack Obama threw his hat into the ring for President, Democrats have been accusing those who disagree with him of being racists. They are of course being disingenuous, pernicious and at the end of the day, most importantly, wrong.

But what if they weren’t? Let’s say somehow the entire universe of conservatives was made up of racists… so what? Does it change the veracity of their stated disagreements with President Obama? If it were in fact the case that conservatives hate him because he is black does that mean that their well thought out, reasonable and clearly articulated reasons for opposing him are somehow less valid? No, of course it doesn’t.

This issue makes me think of hate crimes. I’ve never been a supporter of hate crime legislation. Not because I like crimes or hate, but because it's the act that makes something a crime, not the real or imagined hate. If someone beats up someone else because of their race or sexual orientation or religion, they should be prosecuted for assault, period. Is a victim any less injured or dead because the perpetrator assaulted them for their money instead of their – fill in the blank characteristic? No, obviously not. That’s ridiculous. The criminal justice system should deal with the crime and not worry about trying to look into the soul of the criminal.

In the same way, politics should focus on people’s words and actions and not try and look into the souls of the various participants. Why? Because that is all we can really know about a person. As George Bush discovered with Vladimir Putin, it’s impossible to look into someone’s soul and know what is going on in there. Along those same lines, when Steve Jobs died I wrote that it was possible that he was selfish son of a bitch, but I’d never know. What I do know however is that his words and actions did a great deal of good for hundreds of millions of people around the world. It didn’t matter if Jobs thought PC users were mental dwarves when compared to the Mensa like intelligence demonstrated by those who use Macs. He opened up iTunes to everyone and changed the world of music. It’s what he did that changed the world not what was going on in his soul. But of course race plus politics is something altogether different.

Race has been an issue swirling around Barack Obama since he first declared his candidacy and then continued once he became President. There was the whole Jeremiah Wright deal and Obama’s spending two decades in his church but somehow inexplicably never hearing a single racist comment. There was his knee jerk reaction that the Cambridge police department "acted stupidly" without knowing the facts of the case. There was his attorney general dropping voter intimidation charges against the demonstrably guilty New Black Panther Party. And just last month the President revived African-Americans for Obama. Can one imagine the outrage if Mitt Romney created a Whites for Romney organization?

To the degree that race is an issue for President Obama, it’s either been because he is making it so or because his party is using it as a red herring to deflect criticism of their agenda. The most obvious example of the latter was during the ObamaCare debate when the Democrats famously accused protesters of using racial epithets and spitting on black congressmen. The late Andrew Breitbart did a good job of dispensing with those charges. 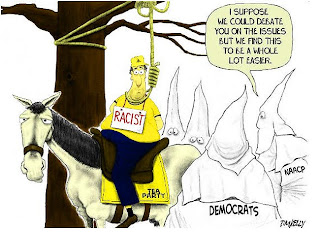 That brings us to the basic element of liberal politics. Their default position towards anyone who opposes Barack Obama and the Democratic Party’s socialist agenda is to accuse them of being racist and that is supposed to be the end of the conversation. In that kind of an environment a conservative simply cannot win – how do you disprove something for which the mere accusation itself is seemingly enough to prove guilt? You can’t. My suggestion therefore is to take a different tack altogether: Don’t try. Rather, I suggest playing the hypothetical card. Instead of trying to disprove the undisprovable, instead suggest: “Ok, let’s pretend I am what you have painted me to be, and let’s assume that’s not going to change… now let’s talk about the issues.”

Now of course many of the good and principled liberals will demure to discuss the issues because they feel it’s inappropriate to discuss politics with racists other than to demonstrate their own non-racist bona fides. In that case you might then suggest to them that if their leader can advocate sitting down and talking with people who want to wipe the United States off the face of the planet they might deign to talk with people who simply want to discuss things like the tax code, the EPA and healthcare.

Don’t hold your breath however. Apparently liberals / Democrats believe that if one is racist (or more accurately, is labeled racist by them) then you are simply not qualified to have a voice in the political arena and your issues need not be addressed. That’s quite a leap for a party whose Senate leader for a decade was a man who had been an Exalted Cyclops of the KKK and filibustered to block the Civil Rights Act of 1964.

Conservatives need not acquiesce to the liberal’s attempt to stifle public discourse. By calling their bluff and taking the non sequitur of racism off the table, conservatives have the opportunity to expose the liberal agenda for what it is, nothing but a recipe for disaster of a cleptocratic nanny state. In doing so and by discussing the facts rather than letting Democrats malign the messengers of the messages they fear, perhaps we can once again allow the American people to focus on the real issues facing the country rather than parrying with shadows of a Democrat created illusion with no basis in reality.
Posted by Imperfect America at 1:32 AM