As I’ve written before, I was a very uninformed young person for the first half of my life. I remember watching a movie in the Florida State student union about how Campbell’s Soup treated workers unfairly. I quickly decided to start my own boycott. Inexplicably, they somehow survived my boycott. I once went to the Tallahassee airport to try and meet Gary Hart before his presidential campaign imploded and I also sat on the stage when Jessie Jackson gave a speech during his 1984 race for the White House. As a Political Science undergraduate one of my professors, a self described Bolshevik, explained the great successes of the Soviet Union thus: Their economic and political system had to be superior to ours, otherwise how could they produce the weapon systems we were so scared of? Made sense to me… There were probably numerous other episodes but my brain has apparently, thankfully, forgotten most of them.

The reason I mention this is because we all did things during our college years that we might want to forget. Luckily for me, none of my nonsense was captured on video. Not so lucky for our President. The video of him encouraging a gathering of Harvard students to embrace the man and the message of the late leftist Dr. Derrick Bell has been making the rounds of the Internet. Although Democrats (and most of the media) suggest this is nothing more than a student showing support for the first black tenured professor at Harvard Law School, I’m fairly sure the President would just as soon not have to deal with the issue during an election campaign.

Luckily Americans recognize that by the time most of us reach middle age, the explorations, experimentations, the ill advised exhortations have been tempered by time and real world experience. Most of course does not mean all, and while one might be inclined to offer a pass to the President for what said in college two decades ago, the same cannot be said for his equally ill advised words two weeks ago.

Of course I’m not talking about Professor Bell. I’m talking about President Obama’s “Energy Speech” delivered last month. Aside from the fact that he makes a number of factual errors, the biggest problem is that the President doesn’t seem to learn from actual experience. 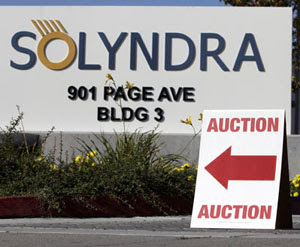 The President seems determined to run the United States off an economic cliff for the sake of his belief in the scam known as “Green Energy”. Not only has he wasted billions of taxpayer’s money on boondoggles like Solyndra, the very expensive and nonworking Fisker-Karma and the rapidly shrinking National Renewable Energy Lab, but more importantly he has added, literally, $243 billion a year to what Americans pay for gasoline. (130 billion gallons a year X $1.86 – the increase in the price of gas since Obama took office) That’s more than 10 times what Americans spend on the NFL, Hollywood movies and in Starbucks annually! Of course there are other unseen costs Americans must bear as businesses have to wrap their increased energy and transportation costs into everything they offer, be it canned tomatoes or package delivery, but those are too numerous to discuss here.

The problem is not a lack of accessible energy as the President suggests, rather the problem is his laser like focus on the illusion of economically viable “renewable” or “sustainable” energy to the explicit detriment of the demonstrably viable and abundant energy sources that fueled the 20th Century. More concerning is that he maintains that focus in the face of the repeated failures of virtually every aspect of the Green Energy hoax:

From subsidized windfarms that are now being subsidized further to stop operating to General Motors halting production of its heavily subsidized Volt because no one wants to buy it to the $50 light bulb that won the Department of Energy’s prize for a “green” but affordable light bulb. Add to that the fact that Green jobs are largely an expensive mirage and you have the makings of what must be a parody of a plan to actually revive the economy. Then when you think about the closing of actual, functioning plants across the country due to increased regulation, and the quixotic support for foreign fossil fuel exploration, it seems like more than just a parody, it’s like he’s mocking the American people.

But, no, really, his intentions are good… Well, even if they were, one must remember Einstein’s definition of insanity: Doing the same thing over and over again and expecting different results. 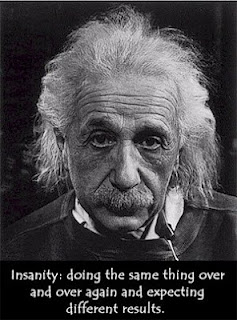 I don’t think the President is insane, which leads me to the conclusion that he’s doing the same thing over and over again expecting the same results. He believes so strongly that he is right about his green agenda that he simply refuses to believe that things will not turn his way eventually. He’s a modern day Walter Duranty, where billions of dollars are being wasted and millions of jobs are being destroyed yet somehow he doesn’t see it, or doesn't care. Like Duranty’s reporting of the economic miracle that was the USSR while Stalin used an iron fist to inflict bloodshed and starvation across the Ukraine and other areas of the Soviet Union, President Obama’s words increasingly ring hollow. More and more often when Americans hear “We can’t just drill our way to lower gas prices” or “We’re focused on (oil) production” or “The only real solution to helping families at the pump in the medium and long term is clean energy. That's how we'll save families money” they recognize they are being lied to in a way that seems almost impossible to believe coming from a President.

Perhaps the President thinks the government’s education industrial complex has eradicated the critical thinking or skepticism gene from the average American so that they will simply believe something because it’s delivered by a man with a smile and an air of confidence. As much damage as government schools do, I don’t think they’ve succeeded in that yet.

At the end of the day most Americans are willing to look past the defiant words of a college student looking to make his mark on the world. I think they are less likely however to accord the same deference for equally nonsensical words uttered by someone old enough to have learned that the world does not actually operate like the ivory towers of academia, where theories and speeches and a lack of real world consequences rule the day. As much of a headache his words at Harvard might be causing for the President, his more current words are causing a much bigger one for the American people. This will take more than aspirin to fix…
Posted by Imperfect America at 2:21 AM