Barack Obama has turned the US economy into a Hollywood blockbuster. Unfortunately it's Thelma and Louise.

Have you ever seen one of those movies where a car is speeding towards a cliff and just before it heads over the edge the driver jumps out and the car flies into the abyss and maybe crashes and ignites into a ball of flame? 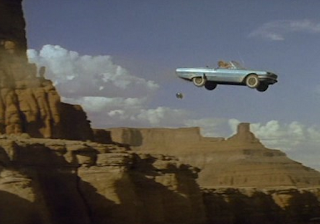 If you haven’t don’t worry, you’re about to live one… and unfortunately for you, you’re not the driver who escapes, you’re a passenger strapped in for the excitement. President Obama is the driver and the way he’s running his campaign, it looks like he’s getting ready to jump…

As you probably guessed, the car in this story is the United States economy. Everyone knows that the economy is… anemic to say the least. The unemployment rate, which is now down to 8.1% is so only because 2.2 million people have given up looking for work since Obama’s inauguration. If those people were still looking for work, if they had any expectation of actually finding a job, the unemployment rate would be 11%.

As bad as two million people being so discouraged that they quit looking for work altogether is, there are a pair of dangers right around the corner that may mushroom that number, and take millions of jobs with them.

The first has to do with taxes. Unless it’s fixed, in January 2013 the tax code is going to create what the Washington Post has christened Taxmageddon. Between the expiration of the Bush tax cuts, the beginning of the taxes within ObamaCare, and a variety of other tax changes, federal taxes are going to increase by a total of $500 billion next year. That means that the government is going to be sucking $500 billion out of the private sector, i.e. your pocket, to fund its turtle tunnels, green energy boondoggles and Las Vegas conventions. To put that amount in perspective, that $500 billion you will no longer have to spend is more than the revenues of Apple, Target, Coke, Disney, McDonalds and Procter & Gamble combined! Now imagine removing that much activity out of the economy… That shouldn’t have much of an impact on jobs.

Would you rather keep that $1,600 (per person) tax hike and spend it as you like on goods and services that benefit you and your family, or would you rather send it to Washington so that the borg can spend it on things like National Public Radio, wealth redistribution schemes and Amtrak? Unfortunately for us we already know what Barack Obama thinks about that.

The second bomb the country is facing is particularly troubling because the danger is so obvious. Why is it obvious? Because we’re still licking our wounds from a mini version of the same problem: the housing crisis driven recession. Although the fundamental cause of the economic meltdown was government intervention in the housing market, the proximate cause was the sub-prime mortgages. Many of those mortgages were of the variable rate type where borrowers received a low introductory rate that would adjust (usually upward) over a period of time or in some cases, abruptly. When rates were low everything was peachy and consumers were purchasing houses at record numbers while investors were borrowing to buy investment properties. The markets were humming along.

Then everything hit a wall. Interest rates jumped, borrowers were no longer able to pay their mortgages, property values plummeted, banks collapsed, and the economy staggered into the “Great Recession”. We were told we were on the brink of a financial meltdown on par with the financial collapse of 1929 and civilization might not survive. Five years later we are limping along, but at least the world didn’t end.

Unfortunately for you and me, Barack Obama has not been smart enough to learn from that recent history. Over the last three years he has piled a total of $5 trillion in new debt on the shoulders of the American people. As bad as that is, that’s not the worst part of it! The greater danger is that virtually every dollar of that new debt is in the form of short term notes. The administration chose this route because, like the homebuyers, they get a great low rate. A two year note today carries a .03% interest rate while a ten year would carry a 2% rate. The problem is, when interest rates spike, all that debt will have to be refinanced, likely at the much higher rates. As an example of the impact of higher rates, consider this: If the government were today paying the 5% it was paying a mere 5 years ago the interest payments alone would be an additional $400 billion a year, almost as much as they will spend on the whole of Medicare this year. That would be like removing from the economy the revenue of Ford, Dow Chemical, Kellogg’s, Google, GAP, the NFL and Microsoft as well. A rate jump from .03% to 5%? No way, that’s not possible. Really? In the two years between January 1978 and January 1980 interest rates jumped a total of 14%, from 6% to 20%. Imagine what $10 trillion financed at 20% might look like!

Barack Obama has set the United States on a Thelma and Louise course, but likely won’t be in the driver’s seat when we actually leave terra firma. Unfortunately for Mitt Romney, the pain that Obama has guaranteed us will likely occur on his watch and there may not be much he can do to avoid it. Indeed, unbelievably, it has the potential to make the current disaster of a presidency look relatively prosperous in comparison.

If he recognizes this in advance, Romney will have the opportunity to steel the American people for the maelstrom ahead while giving them a reason to expect they will get better. That is after all what real leaders do: They prepare their countrymen to persevere through difficult times without needing a scapegoat to make their case; they inspire their citizens to pick themselves up, dust themselves off and go forward to build the prosperous future they seek; and finally, and perhaps most importantly, they seek to reduce the state’s power to frustrate and obstruct the citizenry’s ability to build that prosperous future. Now that’s an action movie I’d like to see.
Posted by Imperfect America at 6:44 AM