It was with great interest that I watched Facebook catch fire with support of the calls for picketing and sick-outs at Wal-Mart stores across the country on Black Friday. From what I could tell, most of those supporting the calls were liberals who attacked the company with claims that it doesn’t pay “a living wage”, “exploits” its workers, or owes its workers health care. I even saw one fantastical claim that a majority of Wal-Mart employees are on food stamps. The suggestion was that Wal-Mart should be forced (via government itself or indirectly via unions) to change completely how it deals with its employees in terms of salary and benefits.

To set the record straight, according to Business Insider, Wal-Mart pays its workers an average of $11.75 per hour, just slightly below retail’s national average of $12.04 and well above the federal minimum wage of $7.25. The company itself states that the average non-manager employee earns between $10 & $12 per hour.

Those wages are at least sufficient to make Wal-Mart the largest employer in the country, with a current headcount of over 1.4 million employees. And no one forced those employees to take those jobs. One of the beauties of freedom is that employees are free to work at Wal-Mart or they can take their labor and sell it to someone else… or better yet, they could start their own businesses. 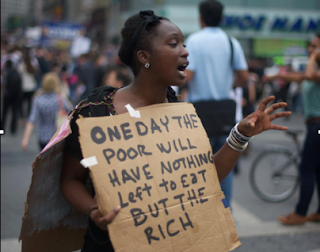 I couldn’t help but think back to the nonsensical Occupy Wall Street protests of a year ago. Many of the participants were carrying around signs decrying Wall Street for its profit mongering and the harm big businesses were inflicting on small businesses and the little guy. Of course their solution of choice was more regulation. Naturally.

Both of these instances reveal more about the protesters than it does about the companies being pilloried. The very regulations they seek are one of the reasons big businesses are so successful verses small businesses in the first place.

It’s a simple example of liberals either not knowing or ignoring basic economics. Take economies of scale. One of its benefits is that you can spread fixed costs out over a larger volume. It works for rent as well as for regulations. Let’s imagine there are two widget stores operating next to one another with identical rents of $10,000 per month. With everything else being equal, the store selling 2,000 widgets a month can build a $5 cost per widget into his prices, whereas the store selling only 1,000 widgets per month has to build in a rent cost of $10 per widget. As such, the store selling more widgets will likely be more profitable, successful and eventually may be able to buy out the second widget store and start its journey to becoming a hated big business.

The same holds true for regulations. Frequently large businesses not only influence regulations to their benefit, but they can also absorb the costs of such regulations far more easily than can their smaller brethren, even if they were unable to influence their writing. Take the tax code for example. At 75,000 pages, a five billion dollar company can easily afford to hire a phalanx of lawyers to find ways to reduce its taxes or lobby for changes. Such luxuries are rarely feasible for small businesses.

This push for regulation is simply another example of the left using the cover of populism to disguise its real agenda: more government control over business. Whether using the fig leaf of environmentalism to further the nonsensical, inflation causing ethanol mandates or the lie of “the rich don’t pay their fair share” to push for higher taxes, the left rarely lets facts get in the way of their pursuit of a socialist, statist agenda.

Which brings us back to the Wal-Mart protests of Black Friday. The real goal of liberals is not to improve the lot of Wal-Mart employees, it’s control of the company via unions and their government enablers. In doing so they would be able to use government regulations to not only take money out of the pockets of Wal-Mart workers, but more ominously, they could harness the power of the NLRB to impose a wide range of costs, controls and dictates on the company.

To put a cherry on top, take Wal-Mart’s misguided and calculating support of Obamacare – calculating that it would impose greater costs on its small competitors – that has now resulted in the company itself dropping healthcare coverage for many employees while drastically raising the premium costs for others. By pushing such utopian, economically illiterate regulations as Obamacare, the Community Reinvestment Act, ethanol mandates and higher taxes for the rich, liberals not only fail in their stated objectives, but they also invite a wide range of unintended consequences, none of which ever seem to be good. Maybe it’s time to drop the picket signs and pick up a copy of The Road to Serfdom.
Posted by Imperfect America at 1:22 AM