As is often the case with terrorist events, the Boston Marathon bombings had an impact far beyond the bodies of the people harmed by the delivery vehicle itself. Of course that is the very nature of terrorism, where the goal is to use the media to leverage shockingly violent attacks – but usually limited in scope – into events that shock and scare a far larger population than they could every impact directly. Whether the motivation comes from inside the head of a single person or the machinations of a disparate international movement, the goal is always the same: drive a change in behavior that they could not otherwise accomplish through peaceful, lawful means.
One of the challenges faced by President Bush after September 11th was in suggesting how Americans should react. He was pilloried by many people for suggesting that Americans “Get down to Disney World in Florida…” and that we should “Take your families and enjoy life, the way we want it to be enjoyed.” That may have sounded frivolous, but the reality is, he was right in suggesting that Americans not let the cowardly terrorists cow them into hiding in their homes. Their goal was to negatively impact the United States and the American way of life. President Bush suggested Americans not allow the terrorists to make such an impact.
That doesn’t mean that there should not have been a reaction to the attacks. On the contrary. Security lapses, which would be comical if they were not so deadly, had to be addressed. From plane boarding to procedures governing the communication between government agencies, many things had to be changed and improved. While the TSA may be an utterly dysfunctional agency with inept procedures where inefficiency seems to reign supreme, it’s at least an attempt to address the procedures that allowed September 11 to occur. Other changes were put in place as well, from the creation of the Department of Homeland Security to the greater sharing of information among government agencies, both between different agencies of the federal government as well as between local, state and federal agencies.  Again, no perfect solutions – not the least of which is the excessive militarization of local police forces – but at least they attempt to address obvious problems.
There also remains much to do to improve security, particularly as it relates to borders, visa control and ports, but the reality is, and the Boston Marathon bombings demonstrated this clearly: there is simply no way to be 100% secure from terrorism. In a real life game of cat and mouse, each time government ups the ante on one aspect of security, the terrorists try and find another softer target and when something occurs the process starts all over again.
While a dozen years on the United States as a whole seems to have gone on relatively unscathed from September 11 – not to discount the life altering sacrifices made by the brave military and intelligence personnel – with Boston America may have crossed the Rubicon, and indeed, just as in Rome, the citizens of the Republic should be concerned. 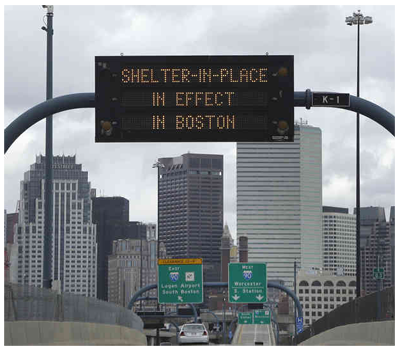 On Friday April 19th America awoke to the warnings that the city of Boston was in virtual lockdown. Government organizations of every kind, from elementary schools to universities to every form of public transportation were closed. In Boston and its western suburbs citizens were “advised” to “shelter in place”. The 10th largest metropolitan area in the United States, the home of 4 million Americans was brought to a standstill by two misfits - one of whom was already dead - who had killed 4 people. In addition, remember, although these two men were indeed dangerous, this was almost a week after the bombings, the remaining suspect was on the run and there was little belief that he was in any position to inflict mass casualties on the citizenry of the Boston metro area.

So what we had were local and federal authorities searching for one man, and they essentially imposed martial law on an entire American city in order to find him. Indeed, men, women and children in Watertown were forced out of their homes at the point of a gun, simply because of where they lived. Millions of Americans were literally prisoners in their own homes in the pursuit of one man – albeit a dangerous one – but one man nonetheless, and one who was by all accounts on the run and likely wounded.

In this case the “shelter in place” orders lasted only one night because Dzhokhar Tsarnaev was found hiding in a boat. (The order was lifted an hour before he was found.) But what if he had not been found on Friday and the search stretched into Saturday and Sunday and the Governor decided not to lift the order? Would people have been forced to stay home for two or three days? What if Tsarnaev had instead hidden and died in a storm drain and was never found. How long would the lockdown have remained in place? 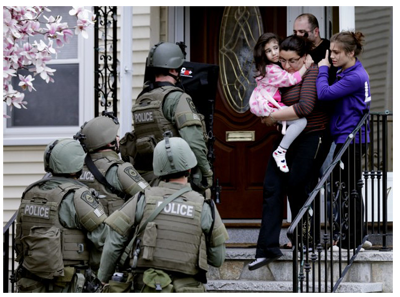 Today a Mirandized Dzhokhar Tsarnaev can sit back and see that with two pressure cookers, he and his brother were able to effect an impact far beyond anything they might have imagined in their wildest dreams. Which brings us back full circle to the goal of terrorism in the first place: Have an outsized impact by the strategic use of violence. What kind of a message does it send to Al Quaeda affiliates around the world or terrorist wannabes across the country? Had the brothers Tsarnaev had similarly inclined friends in Washington, New York and LA would 10% of the American population have been locked in their homes, bringing the financial and government sections of the United States to their knees? What if there was one bomb followed by coordinated bomb threats in 50 cities across the country. How many of those cities would have ended up in lockdown? 2? 10? 25? How many is OK? How long might those situations last?

A few notes to remember: The Tsarnaev brothers were first identified because of images captured by the Lord & Taylor department store security cameras – not by a government asset. Although authorities quickly distributed their photographs, it took the duo carjacking someone and robbing a convenience store before they popped up on the radar. Dzhokhar Tsarnaev was found by a civilian who noticed a loose tarp and blood on his boat rather than by any government agents or assets. The point is, the Boston Marathon terrorists were found because of good old fashioned detective work and the empowerment of the citizenry, not because of the imposition of a city wide lockdown and SWAT teams pulling families out of their homes at the point of a gun.

Unfortunately, humans being what they are, terrorism will likely not be going away anytime soon. Relatively free nations like the United States will always make appealing targets for cowards who cannot win their battles in the realm of ideas. The Boston Marathon terrorist attack was indeed a tragedy, and for thousands of people their lives will feel the shockwaves for years to come. It should not however be the catalyst that sets Americans cowering in corners and letting themselves be locked inside their homes. It’s bad enough that the round the clock hysteria & error filled media coverage communicates to the terrorists a fiction that they have destroyed the American way of life and have the American people shaking in their boots. We should not allow “shelter in place” and military styled assaults on innocent civilians to become the standard by which we deal with such events, lest America become a police state and that fiction becomes our reality.
Posted by Imperfect America at 3:05 AM