In May 1940 the world faced a menace unlike any it had ever seen. After a decade of economic body blows, much of the world was weary. With the carnage of WWI only 20 years past few people had the stomach to fight for much of anything. It was only with great reluctance that in September 1939 the British and the French declared war on Germany after they invaded Poland with the Soviet Union. Nonetheless, even after the declaration, after years of appeasement most British felt that there was little they could do to stop Adolph Hitler.

Things were indeed bleak and spirits were low. On May 10th Winston Churchill would become Prime Minister, and on that same day the Germans would invade and soon overrun Britain’s main ally, France. And so began the most important chapter in the life of the most important leader of the 20th Century. 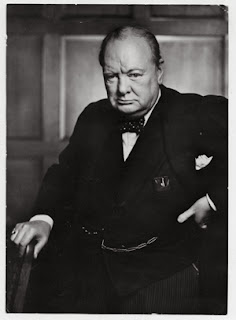 That chapter had followed many others however. Winston Churchill spent years in the “wilderness” of British politics between the two world wars. For most of that time he had been ridiculed as a war monger for his constant warnings about the growing menace of, first, the Communists, then Hitler and the Nazis. He was considered a crack pot… what some today might call today a “Wacko Bird”.

Nonetheless, Churchill persisted, despite the fact that much of the enmity towards him came from those within his own party… particularly for his advocacy of free trade. By 1940 many in Britain were not sure that the Nazi juggernaut could be stopped.

A funny thing happened on the way to takeover of the entire world however. One man rallied the people of the one country that stood between Nazi dominance of the entire continent: Winston Churchill.

One month after becoming Prime Minister, Churchill gave a speech that laid out clearly why the fight was worth fighting:


We have before us an ordeal of the most grievous kind. We have before us many, many long months of struggle and of suffering. You ask, what is our policy? I can say: It is to wage war, by sea, land and air, with all our might and with all the strength that God can give us; to wage war against a monstrous tyranny, never surpassed in the dark, lamentable catalogue of human crime. That is our policy. You ask, what is our aim?
I can answer in one word: It is victory, victory at all costs, victory in spite of all terror, victory, however long and hard the road may be; for without victory, there is no survival.

This speech, and many others inspired the people of his tiny nation to not only survive the Battle of Britain and deal Hitler his first significant defeat, but to go on and play a leading role in the victory over the Axis powers. 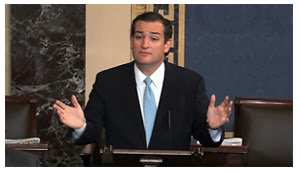 Barack Obama is not Adolph Hitler, the Democrats are not Nazis, and Ted Cruz is not Winston Churchill. Barack Obama is however a statist who seeks to replace free markets and individual freedom with state control and government mandates. The Democrats do however seek to control virtually every aspect of an American’s life. And Ted Cruz understands that victory demands a willingness to say things people may not want to hear, the conviction to stand behind principals worth fighting for, and perhaps most of all, the need to articulate why the fight is being undertaken in the first place.

Churchill was a pariah within his own party and ridiculed from both sides of the aisle, yet he continued to take to the floor of the Parliament and say the things that needed to be said, particularly when few others were perceptive enough to recognize the dangers or had the courage to face them. Eventually the British people recognized that Churchill had been right all along and that he was the man to lead them through their darkest hour. Ted Cruz is not Winston Churchill, but perhaps he carries the spirit of the “Last Lion” with him and if we’re lucky his voice will lead the country past the mortal danger posed by a government that has become too powerful, too dysfunctional, too secretive and too coercive for liberty to survive.
Posted by Imperfect America at 5:07 AM