Last year I was having a conversation with a friend who runs a small business that employs about a half a dozen people and does a little over a million dollars a year in revenue. She came onboard about two years after the recession pummeled the business and they’ve been basically flat since, but they’ve survived, something many of their competitors did not.

She was telling me that she was worried there was not going to be enough money in the bank at the end of the month to cover payroll. At the same time she was having problems with a couple of customers, who, in their niche market, often talk to one another. In that market, once you get a tarnished reputation it’s very difficult to overcome. And, as if bending over backwards for pretentious customers wasn’t enough, she also had to deal with employees who were pestering her for more hours, despite the fact that sales simply couldn’t support them.

Some time later I talked with her and she had weathered the storm. She was able to make payroll, satisfy the irksome customers with a smile and challenge her employees to “help me figure out a way to give you more hours by showing me how you can increase our sales”. Interestingly, the absentee owners talked with her amidst the tumult and heaped praise on an ex manager who was interested in possibly returning.

My friend was a bit disheartened that while she had been able to right the ship and keep it in the black after the downturn, the owners seemed to be looking beyond her. Knowing the owners, I told her she had nothing to worry about. While the owners were talking quite glowingly about the ex manager, there was no way they would ever put him in charge of their store again. Although he was a gregarious fellow and he could schmooze customers with the best of them, and was a great friend to the owners themselves, his sales record was less than spectacular. Customers would walk out of the store having greatly enjoyed themselves, but rarely with purchases. In addition, all of those things that are necessary to make a business successful: book keeping, inventory control, accounts payable, accounts collectable and so much else, he was terrible at. In addition, he had left them in a lurch when he changed jobs on short notice. I told my friend that while they owners might sit in their perches and say nice things about a gregarious ex employee, they knew very well that their business was in incredibly capable hands with her, and that there was no way they were going to give up the solid success that she had built for the flash of someone who could do none of the things she had achieved, regardless of how much he made them smile. 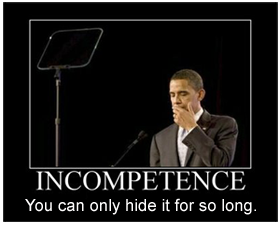 As I am wont to do, I used politics as a backdrop. I told her that she’d probably make a better president than Barack Obama. She looked at me quizzically. I told her that she had actually run a business, had to deal with making a payroll and running that business under the constraints of limited resources, something that he had not only never done, but something his actions demonstrated clearly he had no idea how to do. Unfortunately, unlike the owners of her store, the American people are sometimes not very prudent. They find someone they like for one reason and then they elect them to a job for which they are utterly unqualified. Barack Obama is a perfect example of that. While he might have been an effective community organizer, he had neither experience nor an apparent aptitude for actually running anything. Just because someone is good at one thing doesn’t mean they’d be good at everything. Take John McCain. He was a great war hero who showed great honor and bravery. But that doesn’t mean he would have made a good president… in fact, he probably would not have. And it’s the case at all levels in all kinds of jobs. Just because someone is a good cop doesn’t mean they would make a good Chief of Police. Just because someone is a good programmer doesn’t mean they will make a great CEO.

In my friend’s shop the situation was simply that while the ex manager had been able to make people smile and feel good about themselves, he was terrible at the business of actually running the business. That is exactly Barack Obama with the country. He said the things that made many (although not all) people feel good and smile, but he’s an abysmal failure at actually running the country.

At the end of the day I told my friend that the shop’s owners made the decision to put substance above style when they brought her in. While they may speak wistfully of having someone who made them smile and gave them a laugh, they understand that their continued prosperity is based on having someone in charge who can actually run the business. In 2012 the American people chose just the opposite. Rather than going with someone who was boring, but was a management genius who created billions of dollars of value and hundreds of thousands of jobs, they went with someone who said what they wanted to hear despite his four years of demonstrated managerial incompetence.

It’s no surprise that businessowners, whose livelihoods depend on actual success, choose substance over style when the chips are down while a majority of the American people, whose livelihoods increasingly have little to do with actual success in the real world, choose style over substance. There are more than a few lessons to be learned from that…
Posted by Imperfect America at 4:43 PM