King Barack, the Declaration of Independence and a Textbook Definition of Tyranny

The two great founding documents in American history are the Declaration of Independence and the US Constitution. Today, more than two centuries after each was written, people often conflate the two. How often have you heard someone say “It’s my right… it’s right there in the Constitution… Life, Liberty and the Pursuit of Happiness.” Of course, that phrase is not in the Constitution at all. It’s in the Declaration.

That conflation belies the fact that while both documents are important to our history, they are fundamentally different and do different things. The Declaration of Independence severed the ties with Great Britain, explained the grounds for that split and declared that each state was a sovereign nation unto itself. The Constitution on the other hand articulated how those 13 sovereign nations would come together to form a single nation and how the government would be structured, how powers would be distributed both between the federal and state governments as well as the framework of checks and balances within the federal government itself. A critical element in the passage of that Constitution was the Massachusetts Compromise, without which it would never have passed. It was the Massachusetts Compromise that forged the agreement to add a Bill of Rights as the first order of business when the new Congress met.

During the ratification much of the debate could focus on a Bill of Rights because the checks and balances were already in place within the original document itself: Staggered terms for presidents, senators and congressmen and lifetime appointments for justices; The president’s veto and Congress’ ability to override; The election of congressmen by citizens, senators by states and the president by the Electoral College; Representation in the House based on population and in the Senate by equal numbers, etc.

The whole point of the American Constitution is the United States is a nation of laws, not a nation of men. The founders were too early to have been able to reference John Dalbert-Acton’s famous 19th century quote "Power tends to corrupt, and absolute power corrupts absolutely. Great men are almost always bad men." but they certainly understood the sentiment behind it. As such they gave us a constitution specifically implemented to avoid just that.  They were quite clear about how the government can enact laws. Congresses passes bills and the President signs them into law. The Executive Branch then implements and executes them. While presidents have a great deal of leeway, their job is to execute the law, not write it. The whole point of the Constitution was to have the law making power in the hands of the people’s representatives, not in the hands of a would be king. 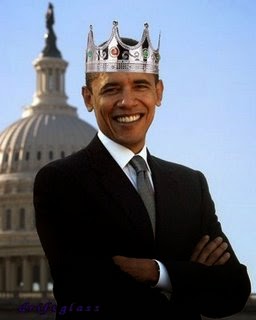 Unfortunately King Barack doesn’t see the Constitution quite that way. To be sure, Congress has a long history of ceding power to the Executive Branch, largely enabled by FDR’s bringing the Supreme Court to heel, but nonetheless, there is a difference between Congresses’ ill advised delegation of authority to the President and his simply taking it. And that’s what we see in Obamacare.

When laws are somewhat open ended, like the 4,000 word document creating the EPA it should come as no surprise that the Executive Branch takes it upon itself to “clarify” the language as it implements the law. The result today is an EPA that is out of control. While that is a bad thing, it’s easy to understand how it came to be. Obamacare has no such ambiguity. It contains over 400,000 words – half the length of the Bible! And in those almost half a million words you find an employer mandate requirement that stipulates: “Effective Date- The amendments made by this section shall apply to months beginning after December 31, 2013.” (Found under the section titled "SEC. 1513. SHARED RESPONSIBILITY FOR EMPLOYERS.") There is no ambiguity there. There is no opaque timeframe for the requirements to take effect. But that doesn’t matter to Barack Obama. In July of last year he changed the rules by Executive fiat… but not the law. That’s illegal. That’s unconstitutional. As Charles Krauthammer says, “That’s banana republic stuff.”

And there are many more instances of the same. We’ve known since 2008 that Barack Obama was not a fan of the US Constitution, but now that he is in charge of the reins of power, he seems to think that he doesn’t need to pay any attention to it at all. How many times have you heard him say something like “If Congress won’t act, I will”? Frankly, that’s a scary proposition for a country that has been largely free for two centuries. There’s a pattern here that seems troubling. Unlawfully seizing property from the rightful owners… check. Using the power of government to try and silence opponents… check. Lying to voters in order to gain their support for legislation… check. Then deciding that that law says what he says it says rather than what it actually says… check. That is a textbook definition of a tyrant and a decent into a banana republic. One can’t help but wonder how much time he’s putting into figuring out how to bypass the 22nd Amendment.

Posted by Imperfect America at 5:25 AM