In my opinion Thomas Sowell is easily the smartest man in America. From Basic Economics, to Black Rednecks and White Liberals to his definitive dissection of the most recent economic collapse in The Housing Boom and Bust, his books are nothing short of brilliant. And of course it’s not just books, he writes a weekly column as well, does interviews, lectures and does research at Stanford’s Hoover Institute. His prodigious talents make him one of the great thinkers and writers of our time.

As much as I enjoy and agree with almost everything Sowell writes, I believe he’s wrong about Ted Cruz. He was not happy with Cruz leading the charge for the government shutdown last year and he’s not at all happy with him on his efforts to unseat RINO republicans.

On the shutdown Dr. Sowell suggested that there was no point fighting the battle because it could simply not be won. “Even if, by some miracle, the Republicans managed to get the Senate to go along with defunding ObamaCare, President Obama can simply veto the bill.” That is factually correct. There was no chance that Obama was going to sign any bill that defunded Obamacare… but that’s OK. Sowell is also correct that the GOP was going to get blamed for the shutdown by a bootlicking media. But the funny thing was, despite the Democrat’s and the media’s warnings that the sky would fall… it didn’t. During the “shutdown” 83% of all government spending went on unmolested, and perhaps most glaringly, only 22% of American people said they were inconvenienced by the shutdown at all! That’s a much lower percentage than the number of Americans who had a negative opinion of Obamacare at that same time, 44% and who wanted Obamacare repealed, 34%. 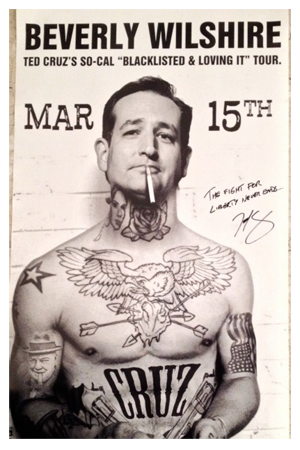 While the media sought to paint the shutdown as a GOP mistake, Ted Cruz gave the GOP leadership an opportunity to harness that attention to articulate why they were fighting to save the country from Obamacare. The fact that the leadership chose not to, or is genetically incapable of doing so is not Cruz’s fault. At a time when the nation’s attention was focused on government policies, Cruz gave the GOP an opportunity to show that “business as usual” was no longer going to fly. Not surprisingly, they failed to do so.

Dr. Sowell is equally perturbed by Ted Cruz’s willingness to attack the GOP leadership, which includes Senators who are up for election in 2014, such as Minority Leader Mitch McConnell and Whip John Cornyn. Also his filibuster in October in an attempt to get the GOP to hold Obamacare hostage to the debt ceiling.

Dr. Sowell often compares (in a negative light) Cruz to George Washington. There is a United States of America today only because George Washington understood that his army was not able to fight the British troops everywhere, but had to choose carefully when and where to fight. Futile symbolic confrontations were a luxury that could not be afforded then and cannot be afforded now.

He makes a similar point using the illustration of the Dunkirk rescue: The British troops who escaped from Dunkirk came back to France four years later, as part of the massive invasion forces that stormed the beaches at Normandy, liberated France and pushed on into Germany for the final defeat of the Nazi regime.

In politics, as in war, you need power to win, and you don't dissipate your forces fighting battles that you are sure to lose. Symbolism and emotional self-indulgence are just not worth it.

While admitting Dr. Sowell is right that Barack Obama’s veto pen would likely rule the day in most situations, I do not agree with his contention that fighting a battle is not worth fighting just because you know you’ll probably lose. That’s because there’s a difference between a battle and a war, and Americans are very much involved in a war. That war may not involve bullets and bayonets, but the stakes are as high as anything George Washington ever fought for. It is literally for the freedom that he won for us and the Constitution secured for us.

Whereas Dr. Sowell compares Ted Cruz’s battles to Washington’s at New York or to the British at Dunkirk, I think a better comparison is to Leonidas at Thermoplyae or the defenders of the Alamo. In both cases the battles were lost, but they inspired the winning of the larger war. Fortunately, in the war effort Ted Cruz is leading the consequences of losing a battle will surely not be fatal, probably even to a political career. But what they might do is finally arouse an American populace that has forgotten that liberty and prosperity are built on the Constitutional principles of individual freedom, limited government and free enterprise and not on government mandates and largesse.

Ted Cruz may lose many of the battles he fights, but the battles are worth fighting. For too long conservatives have acquiesced to the tactics of “establishment” Republicans and as a result we’ve had more than a quarter century of the winnowing of our freedoms and the unfettered growth of government. From farm bills to debt limits to welfare spending to Obamacare, the GOP’s willingness to play it safe has resulted in one unmitigated disaster after another, culminating in the reelection of Barack Obama in 2012. Maybe Dr. Sowell is right, maybe Ted Cruz’s tactics will lose the Senate for the GOP in 2014. If so, so be it. If the American system is going to collapse under its own weight – which is surely the case with the current trajectory – then let the damage be done so that we can get on with the task of rebuilding a nation based on liberty, the rule of law and free markets. I’m not convinced a majority of American citizens are suicidal however, and as Ted Cruz fights the good fight I expect more and more of them will stop and take notice of his message of (very) limited government. With all due respect to the Smartest Man in America, I believe that’s a message worth fighting for.
Posted by Imperfect America at 2:56 PM