I’m a big fan of Matt Damon movies. I’m not however a big fan of Matt Damon’s politics. But that’s OK with me. It’s a relationship that works well for both of us. He gets my money when I’m watching Bourne Identity or Ocean’s 11 and he uses that money and fame to find a bigger soapbox from which to spout comments that I usually ignore.

In the same respect, if you’re a fan of sports there are probably a couple players in the NFL or the NBA who you enjoy watching and are glad they are on your team, but you wouldn’t let them within a mile of your daughter. That’s OK too. Owners don’t pay them to be great sons in law. They’re paid to perform on the field of play. They can then take that money and fame and do whatever they want without involving you at all. You get entertained and they get multimillion dollar contracts and date women who are not your daughters. Everyone wins. 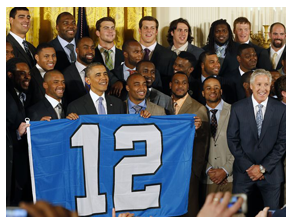 Not all arrangements work out that well. Sometimes what people get paid to do and what they spend their time doing are two different things. I was reminded of something about Barack Obama this week. When he wants to be, he can be very, very good. The president had a press conference with the Super Bowl champion Seattle Seahawks. That ten minute conference was outstanding. Although he did have prepared remarks, there was not a teleprompter in sight. While the notes were in front of him, it was obvious he was familiar with the goings on of both the game itself and the team, including Richard Sherman’s post game “conversation”, Russell Wilson’s new hair (or lack thereof) and the lengths to which Paul Allen might go to help his team win. I almost expected him to ask some of the players to come out to the south lawn to play a pickup game. Without a doubt, Barack Obama was very much in his element.

The thing that I was reminded about was the fact that Barack Obama is an incredible sports fan. ESPN even has the annual “Barack-etology” where the president fills out his bracket. The thing that one can’t escape is that Barack knows his basketball. He knows the players, he knows the coaches, the records and the streaks and all of it is done without notes.

Barack Obama was born to be an ESPN host. Unfortunately, however, that’s not what he gets paid for. He gets paid to be the President of the United States. And unlike Matt Damon and lots of players in the NFL and the NBA, he’s not very good at his job.

Then of course there is Benghazi where no one has a clue where the president was while the whole thing was going on... but we know he wasn't in the Situation Room. And Obamacare where the president either lied or didn’t have a clue about the program when he promised Americans they would get lower healthcare costs, they could keep their doctors and they could keep their insurance. 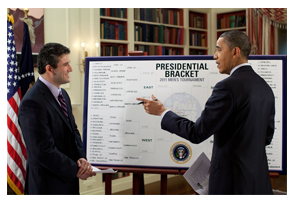 So my question is, is anyone besides me upset that Barack Obama, the guy who is paid to be President of the United States seems to know practically nothing about anything that goes on in his administration until he reads about it on the news, but he could fill in for Colin Coward at the drop of a hat if the ESPN host got hit by a truck? Does it bother anyone else that Barack Obama, the most powerful man in the world seems far more engaged in discussing the potential outcomes of a basketball tournament than he does discussing the outcomes of his disastrous policies? Is it a problem for anyone else that Barack Obama seems more comfortable on a golf course than he does actually running the affairs of the nation?

Sports is a very much an honorable business to be in. As a matter of fact, as a conservative I love the sports business because it is one of the few places left in the economy where hard work, achievement and success are rewarded largely based on merit and without the cancerous concerns of political correctness. As such, I’d like to suggest that Barack Obama leave the White House and begin a new career at ESPN. Americans would be better off as the Biden would fumble the implementation of Obama’s crippling policies and sports fans would have the benefit of a great communicator who knows sports like the back of his hand. That sounds like a win-win for everyone involved…
Posted by Imperfect America at 4:40 AM