The dysfunctional Veterans Administration, the fig leaf of Obamacare and the time traveling Omega 13 device...

In one of the greatest and most underrated movies of all time, Galaxy Quest, the story revolves around something called the Omega 13 device. For most of the movie no one really knows what it is or does. We discover near the end that the Omega 13 is a time machine and it can turn back the clock… but only for 13 seconds. That doesn’t sound like much, but sometimes 13 seconds is enough to recognize a problem and go back and fix it. (spoiler alert) In Galaxy Quest the 13 seconds is enough to rescue our heroes and give them time to save the universe from the bad guy.

Today I’m wishing we had an Omega 13, but I might call it the Obama 5… as in five years. While in reality I might wish to go back and erase the existence of the entire Obama presidency itself, that’s obviously not realistic. But much more realistic would be going back to 2009 and erasing Obamacare. 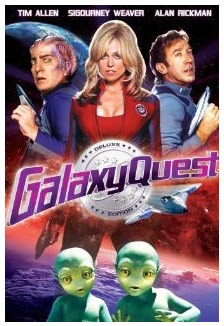 The power of the Omega 13 didn’t come simply from its ability to turn back time, after all, what good would it do to set time back 13 seconds when everyone was busy sleeping? No, rather, the Omega 13’s power came from the ability to strategically turn back time at that critical moment when 13 seconds would make a difference between life and death. With the Obama 5 we may be at just such a moment.

It was in 2009 that Obamacare was passed and signed into law. Since then Obamacare has been nothing but a series of epic failures in every sense of the word empowered by unconstitutional manipulations, obfuscations and outright lies on the part of Barack Obama and his administration. While it was hardly credible, for much of the subsequent five years the administration could simply lie about things like premiums going down $2,500 or keeping your doctor, and since nothing had actually been put in place, there was no “proof” that they were lying. Today, after Obamacare has been rolled out and has been a disaster in every sense of the word, they can’t get away with the lies, although they do keep trying.

What’s more important right now, is not proof that the administration knew that premiums were going to rise and that people could not keep their doctors, rather what is far more important is what’s going on over at the Veterans Administration.

The VA is Obamacare taken to its logical conclusion. Why? Because Obamacare was doomed from the beginning. Even from the mouth of Barack Obama, everyone knew that Obamacare was simply a step on the path to single payer.  Single rulemaker with the fig leaf of private insurance. Once Obamacare failed the government would step in as the provider of last resort. Single payer.  And what is the Veterans Administration other than single payer within its area of responsibility... or irresponsibility as the case might be? 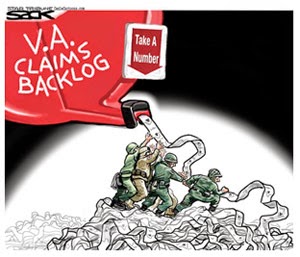 In a piece on Politico Max Cleland helpfully suggests that the target should be taken off the back of VA Secretary Eric Shinseki because, among other reasons “The latest American Customer Satisfaction Index (ACSI), an independent customer service survey, ranks the VA’s customer satisfaction among veteran patients to be the very best in the nation and equal or better then private-sector hospitals.” One wonders if any of the 40 patients who died waiting for service from the VA were among the surveyed… or the thousands of others who were kept on those unofficial waiting lists.

The truth is, the Veterans Administration has a long history of dysfunction, and survives only because a majority of veterans don’t use its services at all or use them as a supplement to their private insurance or use them only after their private resources have been exhausted. Were all eligible veterans to fully engage with the VA to the full extent possible the agency would collapse overnight under the weight.

Essentially the VA survives because there is a relief valve in the form of private insurance. And yet it’s still a perpetually failing enterprise. Now imagine that same structure being responsible for the healthcare of every American from cradle to grave, but without a relief valve. That’s Obamacare. Long waiting lines for care. Substandard care. Severely limited choices. Death panels… and extraordinarily expensive to boot!

Rarely in public policy is it possible to see such a stark representation of the future of a particular piece of legislation. The chaos of the Veterans Administration, the killer waitlists, the duplicitous bureaucracy, the limited choices and much more are on the horizon for every American as Obamacare more fully digests the entire healthcare system.

My guess is that, knowing what Americans now know about the failures of Obamacare, and after watching the fatal consequences of government healthcare play out right in front of them, most Americans would wish we had our own version of the Omega 13, an Obama 5, and would choose to turn back time 5 years, just long enough to correct the error of Obamacare and save hundreds of millions of Americans from a VA style future. Unfortunately we don’t have an Omega 13 or alas Obama 5 for that matter, but we do have an election in November and another in 2016. If there is a litmus test for any candidate, the first question on that test should be their support for a full repeal of Obamacare. It’s not nearly as fun as time travel, but it’s all we’ve got right now…
Posted by Imperfect America at 2:50 AM