Franchising has been nothing short of a spectacular success for America. From restaurants to hotels to auto shops to plumbers, franchising generates hundreds of billions of dollars in revenue each year and employs millions of people across the country.

Modern franchising as we know it was created a century and a half ago by Isaac Singer, an inventor, innovator and the founder of the Singer Sewing Machine Co. He had figured out how to manufacture and sell his sewing machines in enormous quantities but he couldn’t service them across the vast country. So he created a franchising operation… whereby he would license the sale and repair of his machines to local merchants for a fee. They in turn could harness his name and brand to help market their business. It was a win-win situation for everyone involved, including the customer.

At its most basic level, franchising is a vehicle that allows for the replication of a successful business model. Let’s say you live in Richmond and you pour all of your money into opening a restaurant. Thankfully you become an immediate success. Seeking to build on your success you explore opening a second location. Borrowing the necessary money is unpalatable so you consider franchising. In franchising you let another person put up the money to start a store just like yours, but they own it. Typically they will pay you an upfront fee and a small (usually 3-5%) percentage of your revenue, and in return you give them the secrets to your success, rules about things like logos, signage, buildings, how the food must be cooked, the kinds products offered and various other product and marketing elements. And you handle much of the regional or national marketing. You have then become a franchisor and the person who opened and owns your brand's new unit is a franchisee.

Franchising is popular for a number of reasons. From a franchisee’s perspective they don’t have to invest the time and money that often goes into the hit or miss journey of finding what will work in the market. Someone else has already found the secret sauce. Not every franchisee is successful, but they have a greater chance of finding success than someone who is starting from scratch.

Franchisors like franchising because it gives them an opportunity to expand their brands and revenue without having to take up the management of or the capital expenses necessary to open a new unit. In addition, the success of any franchise is heavily dependent on local conditions such as real estate value, demographics, household incomes, traffic patterns to name just a few. Franchising gives companies a local partner who knows the local market far better than they probably could from across the country. 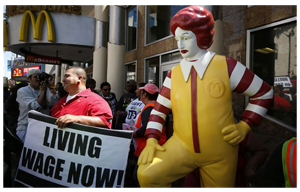 From the success of companies like McDonald's to Hilton Hotels to Jiffy Lube and thousands of others, franchising has been a spectacular success in the United States. Which makes one wonder why Barack Obama wants to destroy the model.

While the president hasn’t said that specifically, his leftists on the National Labor Relations Board have let it be known that that is their plan. At the end of June the general counsel of the NLRB announced that it plans to treat franchisors as “joint employers” as it relates to the unionizing rights for and wages paid to franchisee employees.

The goal of this announcement is to allow employees of franchisees to sue franchisors for the right to unionize and eventually negotiate on wages and benefits paid by their franchisees. This, despite the fact that “franchise contracts explicitly state that franchisees are independent and have complete authority over their own employees”. Labor costs are inherently local, and the familiarity of local partners with local conditions are a key to a restaurant company's success. That is one of the key foundations of franchising.

And so it goes. Just as the Community Organizer in Chief used to fund and train ACORN members to intimidate banks into making sub-prime loans in Illinois, his NLRB has decided that it will kneecap one of the most successful business structures in human history to advance the unionizing goals of the Communist leaning SEIU. The reality is, most franchisees are small businesses sweating to eke out profit margins of 10%. Those franchisees, with their tight margins and fierce competition can little afford the inefficiencies unions invariably introduce or the wage hikes that usually follow. By seeking to use the profitability of McDonald's the franchisor to drive the pay scales of it's 13,000 restaurants makes little sense. Should the franchisee in Live Oak, Florida be forced to pay the same wages paid by a franchisee in New York City where the cost of living is three times as high? If McDonald's is going to be forced to pay the wages for local franchisees shouldn't they then be entitled to a share of each unit's profits? Doesn't that defeat the whole purpose of franchising in the first place? 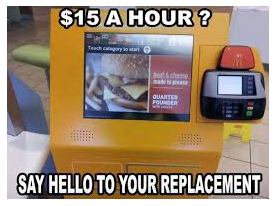 Not surprisingly, if this move by the progressives in the Obama administration survives the outcome will not be good for workers. While some may indeed earn a higher salary, it’s likely that many of them will lose their jobs as franchisees turn to computers and mechanization to reduce labor costs. Already there are machines in the market that can make hundreds of hamburgers per hour… and they do it without picketing, without taking cigarette breaks and without clamoring for higher wages.  So just as the know nothings who passed Obamacare cost employees jobs and others their health insurance, they will be doubling down on "joint employers" and it will be the workers themselves who are harmed.

This move by the NLRB is simply more proof that the Obama administration is filled with people who have no idea how the world actually works. They hide behind the advice of left wing ivory tower academics and try to apply that advice to places where people have to actually produce to succeed. At a time when more businesses are failing than are starting and a record number of Americans are out of work, the last thing America or American workers need is for small businesses to take another body blow from the people in Washington who wouldn’t know how to run an actual business if their lives depended on it.
Posted by Imperfect America at 5:41 AM