Will the Constitution Survive King Barack the Transformer?

What makes a tyrant? Dictionary.com defines tyrant thus: A sovereign or other ruler who uses power oppressively or unjustly.

In 1776 the 13 American colonies declared independence from just such a tyrant. Eleven years later the same 13 states came together to write a Constitution that was specifically crafted to thwart the emergence of a new tyrant. The laws were to be written in Congress, where discussion, debate and competing factions would keep them from consistently favoring one constituency over another. In turn those laws were to be executed by the President whose constituency was the whole country. That separation of powers and duties has been the key to keeping the United States as a free, democratic republic without a tyrant for over two centuries. 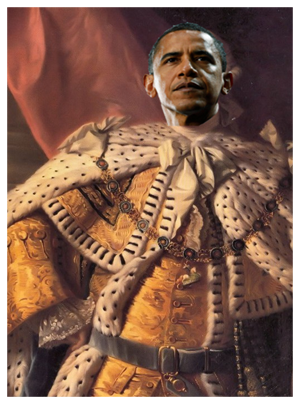 Tyrants rarely adhere to constraints on their power being imposed by anyone or anything, Constitutions included. If they did, they wouldn’t be a tyrant in the first place. At the same time they often don’t brook the slings and arrows of enemies very well either. After all, what self respecting tyrant can allow subjects to feel free to criticize him? Tyrants also often seek to hide what they are doing. Whether it’s a war against someone who has something the tyrant covets or the implementation of a controversial new law, tyrants often choose to obscure the truth of their desires in order to gain the acceptance and acquiescence of their subjects rather than tell them the truth and deal with possible rebellion. Basically tyrants usually do exactly what they want, regardless of what anyone else thinks… but sometimes they feel compelled to lie about it.

Barack Obama seems to have excelled in all of these areas of Tyranny 101. In the first place he sees little constraint on his power. The endless waivers, delays and changes to Obamacare are easily the most impactful example of Obama’s disregard for the Constitution’s direction that Congress writes the laws. Follow that with his “Executive Order” on immigration essentially providing amnesty to millions of illegal aliens and it removes any sheen of Constitutionality. Indeed, Barack Obama is on record 22 times having said he didn’t have the Constitutional authority order amnesty. But he went ahead and did it anyway.

Obama also shines in his treatment of his enemies. This week proof emerged that the administration worked to spike stories by Sharyl Attkisson that were critical of its handling of the Fast and Furious program. Not content with just getting stories spiked, the administration also decided to selectively criminalize the practice of journalism itself when it named Fox News journalist James Rosen as a possible ''co-conspirator'' in a criminal investigation of a news leak. Add to that the IRS’s intimidation of Tea Party groups and anyone who’s just a bit critical of the tyrant president might just want to start checking under their beds and in their closets before they go to sleep at night…

Then there is the lying and obfuscation. The last couple of weeks have been chock full videos popping up of Obamacare architect Jonathan Gruber telling audiences that the lack of transparency in the bill was critical to its passage, because if Americans knew its real costs it would never pass. So rather than tell the American people exactly what Obamacre would do, Barack Obama simply lied to them, reassured by Jonathan Gruber that the citizens were simply too stupid to pick up on it.

Tyrants rarely come to power telling everyone they are planning on ruling as a tyrant, particularly in ostensibly free nations. Instead they usually come to power by making grand promises of reward to a sufficient enough number of voters that they are welcomed through the front door. Once in power however, they begin to scheme and manipulate the levers of power so that they can accomplish their goals, regardless of the rules and regardless of any opposition. Indeed, they transform their perch from that of a servant of the people to a that of a ruler of the people. That is exactly what Barack Obama has done… and it’s only become more blatant the longer he’s been in office. With his amnesty move, coming so close after a decisive vote for the opposition, he’s finally demonstrated with unvarnished clarity exactly what he thinks of American voters and the American Constitution. The Constitution has been strong enough to whether crisis’s before. The paper itself is fragile but the ideas behind it have been extraordinarily resilient. Let’s hope both are strong enough to survive the reign of King Barack the Transformer.
Posted by Imperfect America at 4:41 PM