Surrender: Why does anyone ever vote for the Republican Party... at least one run by Boehner & McConnell?

Do you ever wonder sometimes why Americans vote? How many times have you heard people say “I don’t vote because my vote doesn’t really matter, those politicians are going to do what they want regardless of how I vote.” In some cases that’s true. Obamacare was a perfect example. In January 2010 Scott Brown won his campaign for the Senate in deep blue Massachusetts by promising to be the 41st vote against Obamacare. The Democrats didn’t care, and despite the fact that 60% of the American people were opposed to Obamacare, they sidestepped Brown and used “reconciliation” to shove the law down the throats of the American people. As a result, that November the GOP retook the House in a landslide election, but by that point the damage had ever been done. If there was ever an example of politicians doing exactly what they wanted in the face of constituent opposition, Obamacare was it.

So why did citizens reward Democrats in 2012 and send Barack Obama back to work? Because presidential elections are personality driven contests (as opposed to issue driven contests) far more than are midterms, with the presidential candidates generating an unparalleled level of attention. Voters in midterm elections are generally more engaged and more aware of the issues than many who vote in presidential elections. Not sure? How many videos did you see in 2008 where voters could barely name the vice presidential candidates, nevermind the issues or candidates lower down the ticket. That reality repeated itself in 2012 with the cult of Barack Obama. Add to that the fact that Mittens Romney ran a campaign so uninspiring that millions of conservatives didn’t even bother to show up and it’s easy to understand how the country got another 4 years of The One.

Just two years later however, 2014 proved to be 2010 on steroids as the GOP picked up 9 seats in the Senate. Why? Not only had Obamacare proven to be exactly the disaster Republicans had predicted, but more timely was the fact that Barack Obama was basically promising amnesty to 4 million illegal immigrants. For the GOP, the numbers were clear: fully 70% of GOP voters were against Obama’s amnesty and at the end of the day those voters delivered a victory.

But alas, that doesn’t seem to matter. Like the Democrats in 2010 voting for something 60% of the Americans didn’t want, in 2014 the Republican leadership plans to ignore the wishes of 70% of their constituents by surrendering on immigration. 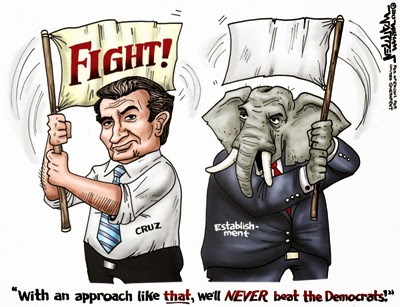 Surrender? That is essentially what the leadership has done as it promises there will be no government shutdown. The purse strings are one of the few checks the legislative branch has on the executive. As such, the primary way Congress can impact what the administration does is by deciding what to fund and what not to fund. In this context, a shutdown would occur when Congress passes a bill to fund the entire government except for those DHS functions involved in the president’s amnesty and then the president vetoes it. No dice say Boehner and McConnell. They are scared that the GOP would be blamed for any shutdown and get hammered in 2016. That’s an illusion, as most of the government would still function, and, frankly, most Americans wouldn’t even notice a shutdown were it not for the bleating of the administration’s media minions. In last year’s shutdown, once it was over a full 78% of Americans reported that they weren’t inconvenienced by the shutdown at all and another 11% felt only minor inconveniences. And a year later the GOP went on to flatten the Democrats in the midterms!

So the question is, why would anyone bother to vote for the GOP in the first place? What’s the point? If they are going to rail against the president acting unconstitutionally but take the single most powerful weapon for stopping him off the table, what’s the difference between the parties besides rhetoric? The truth is, now that they are firmly back in power, Boehner and McConnell feel like they have no obligation to respect their voter’s wishes. Apparently the desire of the Chamber of Commerce’s members for cheap labor trumps Republican voter’s opposition to amnesty.

Such has become life in America in the 21st Century. Half of the voters don’t bother to vote because they feel like their votes don’t count and the other half go to the polls to prove them right. Barack Obama has demonstrated that government can basically do what it wants, regardless of what the law says. The GOP has ostensibly stood against that principal as it claimed to be a bulwark built on the voices of the people. But in reality it is anything but. If the GOP is unwilling to go to the mattresses for amnesty, one of the most visceral issues of the day, what are they willing to do for more pedestrian things like reining in the bureaucracy or the welfare state?

If Boehner, McConnell and the GOP establishment continue to act as paper tigers in the fight against government overreach because they fear a 2016 backlash, they should be prepared to for that backlash to become a self fulfilling prophecy as conservatives abandon them in droves. Some will go Libertarian, some will stay home and some will simply jump ship to the Democrats. At the end of the day at least with Democrats voters understand that the law is no roadblock to getting what you want. Why bother voting for the Republican illusion of restraint when they can simply throw their weight behind Democrats and at least sit at the table when the spoils are dispensed?
Posted by Imperfect America at 6:09 AM