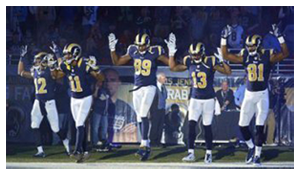 It seems like it’s almost impossible to get through a day without reading or hearing something having to do with the killing of black men by cops. Whether it’s endless Facebook posts or NFL players running out on the field with their “Hands Up, Don’t Shoot” gestures or protests blocking rush hour traffic, it seems to be everywhere. From what you see one would think that black men in America are being killed like dogs in the street across the country. While they might be, it’s not by racist white cops, but rather, by other black men.

One example was a video a friend posted on Facebook of a man named McKenzie Cochran, a black man who died at the hands of three white mall security personnel in Detroit last January. Like the Michael Brown and Eric Garner cases, a grand jury decided not to indict the security officers.

According to the Huffington Post, Cochran had returned to the mall after being requested to leave, threatened to kill someone, refused when asked by security to leave once again and then continued to struggle with officers after being pepper sprayed.

Brown, Garner and Cochran were indeed black, and all three ended up dead at the hands of white police officers or security personnel. But this is far from a war on black men that Al Sharpton, Mayor De Blasio and Eric Holder seem to suggest exists. 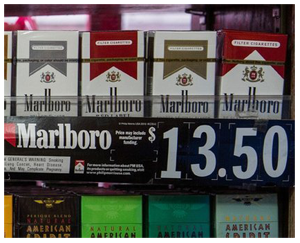 As painful as these situations are for the families, one wonders what might have happened had the police been more differential? Might Michael Brown have robbed another store – and maybe this time pushed someone so that they fell and struck their head on the floor – or might McKenzie Cochran have actually carried out his threat to kill innocents? Eric Garner is slightly different in that his crime was selling untaxed “loosies” or loose cigarettes, a viable pursuit because of New York’s $6.00 a pack taxes. Doing so is illegal. You can complain about the law being stupid, but it was the law and Garner was breaking it. The cops could have let him go, but just days before Garner died the city’s highest-ranking uniformed cop, Philip Banks, issued an order to crack down on loosie sales.

The point is, none of these cases, nor most of the cases the left throws up to demonstrate the institutional racism rampant in America, hold up to scrutiny. They simply demonstrate a confluence of events where people who chose to act badly had outcomes that resulted in their deaths. But such are the odds when someone chooses to act badly, regardless of the activity. Most drunk drivers don’t die behind the wheel, but some do. Most recreational drug use doesn’t result in an overdose, but some does. And the truth is, while police encounters sometimes turn out bad for black men – just as they sometimes do for whites, Hispanics, Jews, etc. – they also sometimes turn out badly for cops. This can be seen by the fact that fifty officers were shot and killed in the line of duty in 2014, a jump of 56% from 2013. The difference is, unlike Brown or Garner or Cochran, these officers were killed while seeking to serve and protect their communities rather than resisting arrest or threatening innocent civilians.

The tragic irony about the rioting and demonstrations and accusations seeking to turn Michael Brown et. al into martyrs for a false cause is the fact that it diverts attention from where it should be. There are no doubt bad cops out there. In any group numbering in the hundreds of thousands you will find some number who have betrayed their oaths. But when the left characterizes all cops as racist killers it makes it impossible to find and focus on the real bad actors. That’s the irony of the whole thing… by wrongly accusing the entire police establishment of being bad, protesters actually empower the cops who are to continue doing business as usual because their actions are lost in a sea of fictional claims of racism and oppression. It’s called hiding in plain sight… by ignoring the difference between bad actors and bad outcomes – admittedly, sometimes tragic outcomes – activists make it that much more difficult to truly weed out the bad cops that really exist. By making everyone a racist, then no one is a racist and real racism has no fear of detection. The result is that activists actually increase the odds of the exact outcomes they are seeking to eliminate by giving them camouflage with a sea of false accusations. But then this is liberalism… where rhetoric is more important than results.
Posted by Imperfect America at 5:55 AM