Barack Obama as Commander in Chief ... The Pentagon as a social experiment

I’ve probably cited this before, but it’s easily one of the best speeches ever uttered in the movies. In A Few Good Men Jack Nicholson’s Col. Jessep explains life to Tom Cruz’s Lt. Kaffee:


“… And my existence, while grotesque and incomprehensible to you, saves lives. You don't want the truth because deep down in places you don't talk about at parties, you want me on that wall, you need me on that wall. We use words like honor, code, loyalty. We use these words as the backbone of a life spent defending something. You use them as a punchline. I have neither the time nor the inclination to explain myself to a man who rises and sleeps under the blanket of the very freedom that I provide, and then questions the manner in which I provide it. I would rather you just said thank you, and went on your way, Otherwise, I suggest you pick up a weapon, and stand a post.”

This speech came back to me a couple of weeks ago as I was reading about women being given special treatment so that they would pass the Army’s Ranger school. This is just the latest example of Barack Obama misunderstanding – or more likely, not caring about – the fundamental mission of the United States military.

From Berghdal to troops being kicked out of the military for beating up child molesters to gays in the military to women in combat roles, to the dangerous Rules Of Engagement troops must operate under, the Department of Defense has become a playground for political activism and social engineering rather than what it actually exists for, which is to defend the United States from external enemies. 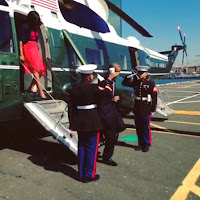 One reason that liberals like Obama feel like they can manipulate the military is because they see it as simply another arm of the government, rather than the unique entity it is. Wherever on the political spectrum one sits, the general role of government is to protect the freedoms of citizens, prosecute those who violate the laws and support economic prosperity via the issuance of patents & trademarks and enforcing contracts, etc. That definition is pretty opaque, but whether we’re talking about the SEC, the FDA or the EPA, the primary goal is not (theoretically) to be prepared to kill hundreds or thousands or millions of people while putting the lives of thousands of Americans at risk.

That however, is exactly what DOD does. The role of the Department of Defense is to defend the nation from external threats, which often includes killing the enemy in large numbers, often violently. At the same time, by definition, it involves putting at risk the lives of American personnel. That fundamentally makes DOD different than HUD or the GPO or the Education Department.

Given the extraordinarily high risks and dangers associated with putting the military in the field, the primary driver of policy should be to further the mission, not social agendas. But the reality is, Barack Obama doesn’t agree with that. To him, putting women in combat or moving the goalposts so that women can “pass” Ranger school is more about combating the “War on Women” than it is about a military prepared to face real combat.

To Barack Obama, gays serving openly in the military make perfect sense as gays can work in law offices or coffee shops or big box retailers with no impact on operations. But the military is not Wal-Mart, Starbucks baristas don’t train to kill people and in most law offices men don’t spend hours and weeks and years training with one another in close quarters where emotions and tempers and jealousies and hormones come into play and put people’s lives at risk while doing so. It’s true, that on the field of battle when the bad guys are shooting at you it doesn’t really matter if the guy next to you is gay or straight or confused if he’s on your side. The reality however is that 99.9% of a military man’s job is not spent in the heat of battle, it’s spent in the classroom learning, in the field training, on back on base regrouping. It’s in those environments where soldiers and Marines spend most of their time that the problems associated with gays in the military are felt, not in the foxhole.

The perfect demonstration of Barack Obama’s view that all government programs are but tools for his social agenda can be found in something tangential to the Defense Department. In 2010 Obama’s NASA Administrator said the following: “When I became the NASA Administrator — before I became the NASA Administrator — He (President Obama) charged me with three things: One was he wanted me to help re-inspire children to want to get into science and math, he wanted me to expand our international relationships, and third, and perhaps foremost, he wanted me to find a way to reach out to the Muslim world and engage much more with dominantly Muslim nations to help them feel good about their historic contribution to science, math, and engineering.”

For Barack Obama the Pentagon is nothing more than a vehicle for achieving his progressive goals. That alone makes him an unfit Commander in Chief. Unfortunately the next Commander in Chief will pay the price for Obama’s folly. Not only will he inherit a military with morale at the lowest in years, he will inherit the smallest Navy in a century, a powerful and growing enemy in ISIS that is a direct result of Obama’s incompetence, and most dangerously he will inherit a world that increasingly lacks respect for American strength... which ironically, and unfortunately, increases the likelihood of actually having to use the military.

But on the upside he will have female rangers, gay couples and transgenders openly serving and a JAG Corps that has been cowed into towing the administration's line on Berghdal. No doubt that should make him feel better.
Posted by Imperfect America at 1:16 AM