Ted Cruz and the Oxymorons of Washington

Oxymoron: A figure of speech in which apparently contradictory terms appear in conjunction

One sometimes thinks the word started with our government: Government Intelligence… Government Efficiency... Government Accountability… In reality, it’s been around since the Greeks first coined the phrase, no doubt adding oxy to a word they probably used to describe their politicians too: Moron.

The Greeks may have invented the word, but the US government has perfected its common use. We have a welfare system whose ostensible goal is to get people back on their feet during hard times yet the numbers of people on the program never seems to go down. We have an education system that spends an ever increasing amount of money to somehow do an increasingly bad job of “educating” our students. Barack Obama has penned an agreement with Iran to keep them from getting nuclear weapons that actually rewards them for bad behavior AND makes it more likely they will get nuclear weapons!

As bad as those things are, and there are countless other examples, this very day we are witnessing possibly the single best example of government incompetence possible. So far this fiscal year the IRS has taken in more money than ever before, $2.6 trillion! Yet somehow they still managed to run a deficit of almost half a trillion dollars. And just two nights ago the utterly worthless GOP introduced a bill that enables even more incompetence in the form of a giant two year spending bill that would also raise the debt limit.  Somehow, Americans watch the middle class struggle while programs for the poor proliferate and the connected rich see their incomes skyrocket as Washington and its regulatory machine smothers more and more of the free market.

This is Washington unhinged. This is how liberalism works… including when enabled by the GOP. The government takes more and more of the citizens’ money, which leaves the citizens with less income with which to live their lives, nevermind have money left over to start businesses as they pursue the promise of prosperity. Seeing the resultant slowing economic growth, the government decides to come to the rescue by creating more regulations and more giveaways to make up for the “failures” of the free markets. It’s a viscous cycle… More government equals less freedom and less prosperity.

And today we have on full display the GOP’s disdain for freedom and prosperity. They seek crony capitalism for the specific purpose of ensuring their continued participation in the Washington cocoon – a comforting place where 7 out of the 10 richest counties in the country are located – out of a total of 3,143 counties! That Washington cocoon provides them with parties to attend, a staff to do their bidding, jobs for friends and family, introductions to the “right” people and of course a golden parachute upon leaving after having done enough favors for big business. 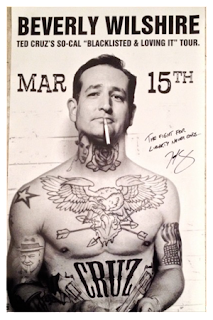 Unfortunately, this is likely a fait accompli as the anointed one, Paul Ryan, the soon to be head squish has jumped onboard. The result of this betrayal of the American people makes it only that much more important that voters look to someone like Ted Cruz to be the next president. We are at a point where the government continues to take more and more of our money, yet continues to demand to borrow even more, and this is while the GOP has both the House and the Senate. Ted Cruz has both the intellect and the intent to thwart the liberal enablers in the GOP. No one else in this race has shown the willingness to fight the GOP establishment the way Cruz has. Today’s treachery puts the nation on notice. If you want a change from the failure of liberal policies and crony capitalism, put someone in the White House who does more than talk a conservative game. Put someone in there who has shown a willingness to fight the leviathan of government and it’s GOP enablers. Someone who's not an oxymoron... That man is Ted Cruz.
Posted by Imperfect America at 7:22 AM