As usual, with the terrorist attack in San Bernardino the left gets it wrong on pretty much everything. Of course their first response was to call for gun regulation because… that’s what they do. Then when it became clear that it wasn’t a couple of white Christian Tea Party types who were responsible, they doubled down on gun regulation to try and distract from the fact that it was Islamic terror.

Whether it’s the focus on guns or the meme that it’s racist white Tea Party Christians who perpetrate most of these crimes, they are simply wrong.

Let’s take the latter first. Of the 21 mass shootings since 1990 that have taken the lives of 8 or more people, white men have been the killers in 10 of them, while minorities and or immigrants have committed the other 11. Of those 10, exactly one had anything to do with Christianity, politics or race, and that was in last year’s Charleston church murders. (See list here) 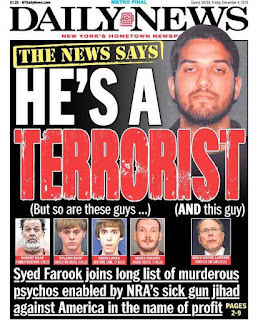 So in the worst of the worst shootings over the last quarter century, despite the left’s focus on white, conservative, Christian perpetrators, the killers actually fit the bill less than 5% of the time. But that doesn’t stop Democrats and their lefty media from seeking to further their agenda by pushing the white racist Tea Party Christian meme every time one of these events occurs.

Which brings us back to guns and the left’s goal on eviscerating the 2nd Amendment. As we’ve seen, they are not above seeking to exploit any tragedy to further their agenda, regardless of how wrong their narrative is. Despite the fact that California already has some of the strictest gun laws in the country, they claim that we need more gun legislation. Their narrative is that if we could just get Americans to give up their guns – or take them if necessary – then the US would suddenly become a peaceful place.

They are simply wrong, America is already a pretty peaceful place – or at least most of it is. There are over 300 million guns in the United States. Each year 299 million of them are not involved with murders or crimes of any sort. The problem isn’t gun ownership… the problem is criminals on the street. According to a study by the Milwaukee Sherriff’s Dept., 97% of the suspects – and 85% of the victims – in non fatal shootings had criminal records. In homicides the numbers weren’t much different: For all homicides in 2011 -- those involving guns and those that didn’t -- 57 percent of the 72 suspects and 62 percent of the 66 homicide victims had at least six prior arrests. Six arrests! Baltimore has similar numbers and one would expect that they would be reflected in the rest of the country as well. So the problem is not guns, but rather criminals. And to put a fine point on the fallacy of the gun control reduces violence narrative, in Chicago, crime increased after guns were regulated… and dropped when the city was forced to begin issuing concealed carry permits.  Keep the criminals in jail and the crime rate would drop... but that would deprive Democrats of voters.

Something Democrats never mention is that in many countries with more restrictive gun laws than we have, crime rates are in fact actually much higher. Nor are they spared mass killings either. There was of course the attack in Paris last month, and the Smithsonian Magazine writes in a piece titled Outside the Americas, Knives Are Often the Weapon of Choice in Homicides:


In Japan, in 2001 a janitor wielding a kitchen knife killed eight children at an Osaka school where he worked, while a man in Tokyo went on a random stabbing spree with a dagger in 2008, killing four people. In South Korea, a disgruntled man killed eight people in a stabbing spree at his apartment complex in 2008. In Germany, a drunk 16-year-old stabbed 41 people at the opening ceremony of a Berlin train station. And last year, anti-knife campaigns ramped up in the U.K after a 13-year-old girl was stabbed to death.

In addition, in Israel today Jews are being stabbed and run over by cars on a regular basis… and there they have lots of guns. The problem isn’t guns, it’s people with bad intentions.  Get rid of the guns and they will still find knives, cars, bombs, poison or countless other ways to kill people.

Despite the facts, the left continues peddle gun laws as the solution to the problem of crime and a culture of violence they have fostered. Similarly contrary to facts, they continue to blame white conservative Christians for the massacres we see all too often see on our TVs and in our communities. We shouldn’t be surprised however as the Democrats and their media lackeys have a long tradition of manipulating and obscuring facts in order to hide from the failures of their progressive agenda. No doubt when the doors are closed lefties can be heard saying "Hmmm... If there was only a way to take the guns out of the hands of citizens the the government could simply start it implementing the social programs that would eliminate all this crime and racism and inequality and hurt feelings and..."

The founding fathers may not have been able to conceive of the notions of television or the Internet, but they sure understand human nature and the dark side of government.  Thank God - and James Madison & friends - for the 2nd Amendment.
Posted by Imperfect America at 1:30 AM