Skynet: Terminator Wasn't Fiction, It Was History - And We're Living It

Sometimes art imitates life and sometimes life imitates art.  Today we are living the latter… and it’s called The Terminator.  Little did we know when we first watched Arnold utter “I’ll be back” in 1984 that we were actually watching our real future.

For those who don’t remember, Terminator was set in 1984 Los Angeles when a cyborg is sent back from 2029 to kill Sarah Connor. The premise is that at some point Skynet, an artificial intelligence defense system, had gained self awareness and launched a nuclear war in its effort to destroy civilization and the humans who built it.  A resistance had formed and John Connor was leading it to victory over Skynet.  In a last ditch attempt for victory Skynet sent the Terminator back in time to kill Sarah Connor before her son, John, could be born.

While the names may have been changed to protect the not so innocent and while we may not be in 1984, make no mistake, we are very much in the throes of the apocalypse that Linda Hamilton was driving off into the sunset to face.

Our Skynet is called Silicon Valley and its comrades of the American left.  Unlike Skynet, which gained self awareness, Silicon Valley, is full of people who seem to have no self awareness at all.  They proffer ideas that normal people recognize as ludicrous such as men can give birth, America is systemically racist and defunding police leads to safer streets, yet they think they are correct about everything.  Just look at the world they exist in. The Bay Area is overrun with homelessness, drug addicts literally sprawled out on the sidewalks, the streets are covered with human feces and hypodermic needles, violence is raging out of control and so many criminals shoplift with impunity in full view of employees and cameras that national chains and mom & pop shops alike are having to close their doors because they’re losing so much money. What’s more, their calls for defunding police persist, despite extraordinary spikes of violence.

The left is anything but self aware.  They push insane policies that lead to the literal destruction of society and somehow believe they are standing up for the oppressed.  They claim that America is racist while in fact the United States may be the least racist nation on the planet.

Of course none of this would matter if Silicon Valley were today just the sleepy erstwhile farmland it was when Hewlett & Packard launched their company in 1939, or even as late as 1976 when Apple was launched.  But Silicon Valley is no longer that tranquil, serene suburb, but rather it has become the hub of our Skynet.  Silicon Valley, between social media, information hosting and communications, has gained a stranglehold on virtually every American citizen.  Privacy no longer exists.  Free exchange of ideas no longer exists.  Opinions that differ from the approved script are no longer allowed and are banned from the public square.

Silicon Valley in general and social media in particular have set Americans against one another every bit as much as Skynet set humans against one another via nuclear war.  The truth is, social media is even more insidious than Skynet.  At least with nuclear war you understand the enemy is indeed an enemy and you recognize that mortal danger that lies ahead. Social media creates enemies where there used to be friendship, it creates victim oppressor relationships where none exist, it provides tools for groups to attack individuals with unapproved ideas and do so both online and off, usually with impunity. 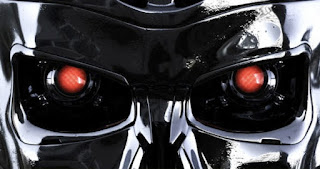 In addition to turning people against one another, the other aspect of The Terminator that rings far too true in 2021 America is the erasure of history. Schwarzenegger went back in history to try and eliminate Sarah Connor in order to stop John Connor from ever existing.  In a similar way, social media, BLM, Antifa and Democrats writ large are actively erasing American history.  First it was statues of Confederate generals, then it was the Founding Fathers followed in short order by Aunt Jemima and Mr. Potato Head and Dr. Seuss.  Half of history is erased and the other half is rewritten.  No longer was America born in 1776, but rather 1619.  No longer was America founded on freedom, but instead on slavery.  America was never a land of opportunity but a land of oppression.

The last, and perhaps most disturbing element of The Terminator documentary is the fact that Skynet never gave up.  Although the movie ended with the cyborg crushed to death in a press, we all know that that was not the real end of the story.  Not only did the cyborg survive, but Skynet kept sending newer and better assassins to kill Sarah or John or somehow destroy the past to prevent the future.  Donald Trump is our John Connor and his tenure in the White House was the perfect demonstration of this unbridled attack machine:  Four years of the Russia hoax, even after it was proven demonstrably false… Kids in Cages… “Suckers and losers”… “Good people on both sides”…  Trump’s a racist… Trump’s a sexist… Trump hates immigrants… Trump’s a fascist… Obstruction of justice… Not to mention the impeachment.  And when all of that fails, they blatantly steal an election under the cover of night and then attack the people who point out the theft as racists. And then another impeachment!

The left was and is simply relentless.  Like Skynet, they literally never, ever give up. Even when you think they are defeated, when you win the highest office in the land, they find novel ways to thwart your victory. Get elected on the platform of building a wall they engage a dozen different ways to thwart it.  When one element of the Skynet swamp is eliminated three more simply arrive to take its place.

At the end of the day, Silicon Valley, the Media and the Democrat party are what Skynet was: an existential threat to civilization and everything we hold dear.  A threat to common sense, rational thought, individual freedom, the Constitution, and most of all, the Republic.  America has been the bulwark against tyranny in the world for almost a century.  When our Skynet succeeds in eliminating the United States, the entire world will be less safe and eventually civilization will collapse just as it did when 2029’s Skynet launched its war.

Reece’s characterization of Skynet couldn’t be more accurate today:  “Listen and understand. That terminator is out there. It can’t be bargained with, it can’t be reasoned with. It doesn’t feel pity, or remorse, or fear, and it absolutely will not stop. Ever. Until you are dead.”  That is the future we are facing.  Unless Americans can figure out how to stop it.

Posted by Imperfect America at 10:05 AM