Unconstitutional vax mandates have given Americans a glimpse into the control the government has – or thinks they have over our lives.  But have idea how much the government is involved with their everyday lives.  Most of us get up, go to work and come home without the government ostensibly telling us when to do this or what we have to feed our kids for dinner or when we have to go to bed.  We think we’re free, but we’re not.  Just because storm troopers aren’t standing in every doorway of your house doesn’t mean the government’s not there… they are, in a million different ways, invisible by design, and often the storm troopers are implied.

Not sure?  Let’s take a journey of a day in the life of a typical American.

You wake up at 5:00.  You’re literally laying on the embodiment of one of the most famous government rules, your mattress.  The government footprint is found on the tag that famously says:  “This tag may not be removed under penalty of law except by the consumer.”

You have a headache and go to the medicine cabinet.  There you’ll find the fruit of one of the most regulated industries in the economy, medicines.  Have you ever wondered why when you pick up a prescription you get a mini newspaper of information?  Have you ever wondered why it takes boxes the size of sandwiches to hold medicines the size of thimbles?  It’s because of the information manufacturers have to print on the boxes or on the tiny books inside the boxes telling you about every single thing that might ever happen as it relates to that medicine, no matter how rare or unlikely.  Of course in order to get an encyclopedia’s worth of information there they print so small that no one could read it, even if they wanted to.  And to that they add more online.  This is of course all driven primarily by government regulation and secondarily by manufacturers seeking to insulate themselves from lawsuits…

Now you head down to the kitchen to grab some breakfast. You open the refrigerator, which still has one of those mandated yellow stickers telling you how much energy it uses, and grab your pasteurized milk because unpasteurized milk is illegal in half the states and heavily regulated in most. Then you grab a box of cereal and read the required “Nutritional information” on the side of the box because your paper hasn’t arrived yet.

After breakfast you head back upstairs to the bathroom and you use the toilet that you have to flush twice because federal regulations limit how much water each flush can use and then jump into the shower and feel like you’re in a Seinfeld episode because the manufacturer wanted their showheads to have the EPA’s “WaterSense” designation.  From there you use toothpaste, antiperspirant and hair gel, all of which have differing levels of government regulation.

Now you get dressed.  Unless you’re wearing a your birthday suit to work, virtually every single piece of clothing you put on will be regulated in one or more of a spectrum of ways, from labeling, sourcing, content and of course advertising.

Dressed to kill and ready to take on the world you emerge from the morning’s regulatory morass into one of the most regulated parts of our everyday life:  cars.  Of course everyone knows about CAFÉ standards which regulate the MPG a manufacturer’s fleet much attain, but there’s so much more, covering virtually every single piece of the thousands of pieces that go into every car; wire harnesses, windshield wipers, head lights, seat belts, air bags, brakes, brake lights, door locks, trunk escape handles, plus things like pollution emissions, door strength, union regulations, nation of origin labeling, steel trade policy, and more.  And that’s before you even get on the road.  Once on the road most laws are state and local, although one of the few good things Jimmy Carter ever did – although of dubious constitutionality – was to make Right Turn on Red the default rule from sea to shining sea. There are laws about child seats, tinted windows, fog lights, not to mention the countless laws about virtually every aspect of actually operating a vehicle itself, starting with getting and maintaining a license and insurance. 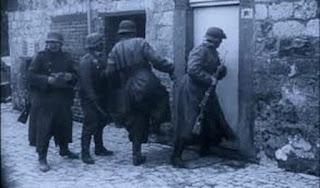 Indeed, auto manufacturing may be one of the most regulated industries on the planet, but it’s far from alone. “The National Association of Manufacturers (NAM) has found that the industrial sector faces a staggering 297,696 restrictions on their operations from federal regulations.”

Now that you’ve safely transversed the route between home and office you enter a quagmire of regulations that extend from the building to virtually everything that goes on within.  There are of course building codes that cover literally every single thing that goes into a building from plumbing to electricity to the kinds of lights that can or must be used, how much ventilation there must be, fire exit signs, number and type of fire extinguishers, the number and size of bathrooms, numbers or sizes of windows, what paint can be used, handicap access, how many parking spots and how many must be reserved for handicap parking, and more.

The actual operating of the business offers more regulations… Minimum wage laws, hiring regulations, overtime laws, union regulations, maternity laws, a phalanx of OSHA (Occupational Safety and Health Administration) rules and regulations, not to mention the mishmash of training requirements each state has.  Everyone knows it takes years to get the education necessary to become a licensed Doctor, Lawyer, Veterinarian, Accountant, Stock Broker, etc.  But those white collar jobs are far from the only ones that require licensing.  In Georgia in order to work as a hair “stylist”, one needs training, and lots of it:

And Georgia is far from alone.  39 states require licensing to become a Massage Therapist, 33 to work as an auctioneer, 26 a taxidermist, 13 a bartender, 8 a travel agent and 1 a florist.  Of course, it’s not just the license.  Most of those license requirements come with training, very often expensive training.

So once everyone is at work and licensed, it’s time to actually… work.  Regardless of what business you’re in, from selling cheeseburgers, financial planning or pouring concrete to running a gym, burying the dead or selling advertising, there’s likely a phalanx of regulations that constrain your operations, from general workplace regulations to industry specific mandates, all of which must be addressed in order to begin or continue operations.

Finally, after eight or ten hours trying to navigate the labyrinth of regulations while actually trying to do your job, you knock off for the day and the process reverses itself until you brush your teeth with the government regulated toothpaste, turn off the nightlight with its government mandated light bulb and snuggle up with your wife in your government approved bed for what might be the only thing left unregulated in America.

Just because you don’t see the stormtroopers at your door doesn’t mean they aren’t there. They are. They’re just disguised as benevolent bureaucrats and politicians who are just trying to make your life better.  Think about that the next time you hear someone say “the government should do something about this”.  They already are, and each time they do they take a bit more of your freedom with them, regardless of how trivial it might seem at the time.  Freedom, like the Grand Canyon, is not carved away in an instant, it’s carved away grain by grain and inch by inch, so slowly that one never notices, until one day you open your eyes and there’s a giant canyon where American liberty used to stand.  The difference is, that which went missing in the desert created a majesty that is the Grand Canyon while that which has gone missing from your Constitutional freedoms created a wasteland of coercion, corruption and complacency that is rapidly turning what was once the greatest nation on earth into a dystopian third world cesspool.
Posted by Imperfect America at 3:36 AM