The Kyle Rittenhouse Trial is More Than Just a Trial. It’s a National Rorschach Test...

The Kyle Rittenhouse trial is more than just a trial.  It’s a Rorschach test with only two possible answers.

The basic facts of the case are widely accepted by everyone, that Kyle Rittenhouse shot three people on the night of August 25, 2020 in Kenosha, Wisconsin amid a violent uprising that had been going on for days.

The schism itself has little to do with Kyle Rittenhouse, at least directly.  Instead it has virtually everything to do with how people look at America writ large.  Most of those who want to see Rittenhouse convicted were supportive of the riots and violence that erupted across the country last year.  It’s largely the people on the left, the people who find racism everywhere they look, find injustice and inequality everywhere they look, the people who basically hate America and freedom who want Rittenhouse locked away and the key thrown away.

On the other side are Americans who were horrified by what they saw 18 months ago, and not just the destruction that played out on their television screens night after night.  No, what was even more disturbing was that in many locales the police (usually neutered by politicians) were simply allowing it to happen.  These are the Americans who generally support the police and abhor the tyranny of the mob. At the same time they understand the concepts of private property and the rule of law, both of which are fundamental to our Republic.

So once the verdict is handed down, the perspective that many Americans have on it will not be based on the facts presented in the courtroom, but rather their perspective on America.  And that’s problematic.  Why?  Because of the fact that we have in the United States a media that is fully ensconced in the anti-America camp, and to the degree that so many Americans look to it as they formulate their opinions on America, that doesn’t bode well for the Republic.  A century ago Mark Twain popularized the phrase “"Lies, damned lies, and statistics" which referred to the notion that people’s lack of understanding of statistics could be used to reinforce weak arguments.  Today a more appropriate construction might be “Lies, damned lies and the media”. 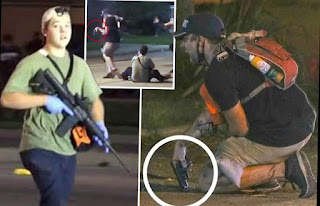 Much of what went on in the streets of the country 18 months ago was driven by the media.  Much as they did with Vietnam, the media manipulated coverage, outright fabricated stories and covered up the reality of what was going on in the streets in order to destroy Donald Trump and further their hard left objectives.

2020 was something of a perfect storm of opportunity and the cabal on the left spun it into fascist gold.  Today in America we’re living the lives George Orwell warned us about.  Reality and rationality simply don’t matter.

Those are fundamental truths that apply in any society anywhere on the planet.  Despite that, there is a significant element of the American population who are immune to such truths.  How does such lunacy take hold?

It takes hold when the elite, the opinion makers, those in the news, entertainment and the hierarchy of the bureaucracy are simply deluded.  The perfect example of that is the European loving elite who want to transform the United States into Europe.  They visit Paris and London and stay in 4 star hotels and eat at Michelin rated restaurants and think that’s real European life.  They come back to the United States and use the New York Times, CNBC and Hollywood to tell Americans that’s what we should strive for.  The reality is they’ve mistaken their weeklong vacation in Rome for the experience for what most Europeans actually live.  It’s not. Not even close.  And the truth is, they have an equally unreal understanding of what life is like for most Americans, particularly those in the working class, those without college degrees, those who don’t live in the bucolic environs of McLean, Virginia, the Hollywood Hills or the Upper East Side of Manhattan. The elite, the opinion makers in this country, with their journalism degrees from Columbia, their esoteric internships at blue chip foundations or their jobs in the bureaucratic swamp have little in common with the average American… But none of that stops them from giving America lessons and using their positions of influence to frame the news and influence policy.

These elites promote a fictional nirvana above the reality of life.  They tell minorities they’re victims of white racism and oppression, the poor they’re victims of heartless rich Republicans – despite the fact that most of the rich in America are Democrats – and they tell women they’re victims of male dominance.  The result is a segmented society where reality is sacrificed at the altar of victimhood.

What’s important is no longer how well a school’s student body performs on academic tests, but rather the racial makeup of its student body or its teachers.  Skin pigment and gender identity trump military readiness and the ability to defeat an enemy on the battlefield.  Boardroom diversity trumps a company’s need to serve its customers and profit its shareholders. The greenness of its energy generation supplants an power company’s need and ability to deliver sufficient and reliable energy to customers.

In the real world woke priorities simply don’t matter, but the elite have not only convinced half of the population they do, they’ve convinced them they’re the only things that do.  They have convinced half of America to view the world through a woke prism, with race being first among equals.

And that’s where we are with the Kyle Rittenhouse case.  Half the country understands the basic premise of individual liberty, private property and most of all, the right to life and the right to protect it.  The other half feels like your life, your property and your freedom are not really yours, but theirs, to do with what they choose.  That’s how we get to the point where three white thugs causing mayhem and threatening to kill a white kid protecting private property end up getting shot and killed (two of them) by that same white kid, and the entire episode becomes a national Rorschach test on race.

Posted by Imperfect America at 3:13 AM