Much of the world was already engaged in war in 1941 when the United States joined the fight.  Most of Europe and much of North Africa were under the boot of the Nazis while most of the Far East was controlled by the Japanese.  German U Boats were prowling the seas sinking ships around the world from belligerents and non belligerents alike.  There was a world war going on, we just weren’t active, frontline participants prior to Pearl Harbor. However one looks at that period, the world as we know it was under fierce attack and eventually would have enveloped the rest of the world, including the United States.

In February 2022 none of that was true.  Sure, Russia invaded Ukraine after invading Georgia in 2008 (then leaving after six months) and annexing Crimea from Ukraine in 2014.  And sure, Vladimir Putin has been saber rattling about reconstituting the lost parts of the USSR.  But the world in 2022 was not the world in 1938/39…

NATO didn’t exist then. The UN didn’t exist then.  More importantly, the economic integration of European nations to one another and the rest of the west didn’t exist to the extent it does today.  And finally, in the late 1930s the Nazis had the most powerful military on the planet, while today Russia’s troops are rightly seen as inferior to most they would face in the West.

All of that to say when Russia invaded Ukraine in February of this year, the world was not on the brink of anything resembling a world war.

If you took a time machine and went back to February of 2022 and asked the American people would they be willing to spend in excess of $50 billion and send the world into an economic tailspin if Russia invaded Ukraine, my guess is they would have said no.  They might have talked about bulking up NATO forces, they might have talked about sanctions, but I doubt they would have supported propping up a corrupt regime in a notoriously corrupt nation with tens of billions of dollars that would have to paid for by taxpayers already struggling under the weight of inflation and economic malaise.  Nor would they have wanted to bring America and the world to the brink of a nuclear cataclysm.

But here we are, six months later, exactly there, with Vladimir Putin opaquely threatening to use nuclear weapons and the leader of Ukraine goading the United States to strike first with its nuclear weapons.

What is most sad about all of this is that none of it had to happen. A new piece in Foreign Affairs states “in April 2022, Russian and Ukrainian negotiators appeared to have tentatively agreed on the outlines of a negotiated interim settlement: Russia would withdraw to its position on February 23, when it controlled part of the Donbas region and all of Crimea, and in exchange, Ukraine would promise not to seek NATO membership and instead receive security guarantees from a number of countries.”  So essentially, in April, less than two months after the beginning of the war, the parties involved were close to agreement with returning to the status quo of what existed the day before Russia invaded.  But the agreement collapsed.  Why? Joe Biden… 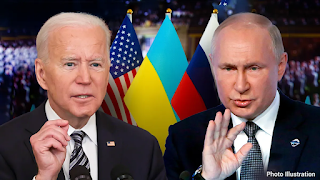 “As soon as the Ukrainian negotiators and Abramovich/Medinsky, following the outcome of Istanbul, had agreed on the structure of a future possible agreement in general terms, UK Prime Minister Boris Johnson appeared in Kyiv almost without warning.

"Johnson brought two simple messages to Kyiv. The first is that Putin is a war criminal; he should be pressured, not negotiated with. And the second is that even if Ukraine is ready to sign some agreements on guarantees with Putin, they are not. We can sign [an agreement] with you [Ukraine], but not with him. Anyway, he will screw everyone over” is how one of Zelenskyy's close associates summed up the essence of Johnson's visit.”

Now that’s Pravda, a Russian mouthpiece, but its assertion dovetails with statements Johnson made publically two weeks later:  “British Prime Minister Boris Johnson said any peace talks over Ukraine are likely to fail, as he compared holding talks with Russian President Vladimir Putin to negotiating with a crocodile. Johnson said dealing with Putin was like "a crocodile when it's got your leg in its jaws" and said it was vital that the West continues arming Ukraine.” And “Johnson said world leaders, including U.S. President Joe Biden, agreed on a call this week that they would continue to supply Ukraine with weapons, including artillery, as Russia intensified its attacks on Ukraine's East.”

So, essentially, the combatants had come to a resolution to their conflict when the west shows up and decides they’d rather have more war. The “they” in Johnson’s statement about not being on board with a peace settlement is telling.  Johnson was no doubt acting on behalf of the man who “has been wrong on nearly every major foreign policy and national security issue over the past four decades”, Joe Biden.  There’s simply no way to believe that the UK was going to put the kibosh on what could be a peaceful settlement to a potential powder keg without Washington’s approval or encouragement.

At the very moment when a fragile peace could have been worked out and negotiators begun to solve the differences between Russia and the Ukraine, Joe Biden steps in and does what he does best, mess things up.  The timeline here is interesting… Despite the fact that on March 10th the US promised Ukraine $13 billion and on March 26th Biden told the world that Putin "cannot remain in power," the Russian and Ukrainian negotiators were still able to come to an agreement on a peace deal.  And staggeringly, Joe Biden scuttled it.

Here we are, in September and the much of the world is in recession, prices for everything are up dramatically, the US has provided Ukraine with upwards of $60 billion in aid and Europe is facing energy shortages and skyrocketing prices just as winter approaches.  And now nuclear war is in the air.

Most certainly Russia tried to influence the 2016 elections in the US, but many countries do so.  It’s called statecraft and most certainly the United States does an enormous amount of it.  Nonetheless, even the Washington Post, the Democrat mouthpiece, states that the Russian’s “efforts were small in scope, relative to homegrown media efforts,” instead blaming “Fox News and the insular right-wing media ecosystem it anchors.”

And there we have it. The world of 2022 is looking a bit more like Europe of the late 1930’s and on the brink of war because of Joe Biden’s Trump Derangement Syndrome. But rather than being some troll on Twitter reposting Democrat memes from his Mom’s basement, Joe Biden is the leader of the free world and is expressing his TDS by sending billions of taxpayer dollars to Ukraine, sending the world into a global recession and threatening Russia to the point where its leader threatens to use nuclear weapons.

On literally every single issue of consequence today Joe Biden is wrong.  On the single biggest issue of today Joe Biden has not only been wrong, but catastrophically so.  At the moment the world should be finding ways to pick itself up from the economic body blow of the Covid lunacy, the world is watching Putin hover his shaky finger over the nuclear button and wondering how many Europeans will freeze to death this winter because they don’t have enough energy to heat their homes.

In 2022 if the world finds itself in a nuclear conflict, Vladimir Putin will bear some of the blame, but he will share that with the feckless Joe Biden.  Putin’s a thug and Biden’s a dunce and everyone knows it. Most of the blame however will sit squarely on the shoulders of the purported “81 million” Americans who were so angered by “mean tweets” that they put into the most powerful office in the world someone demonstrably not capable of running a lemonade stand.  But at least, like Neville Chamberlain they had good intentions.

Posted by Imperfect America at 10:19 PM