Elena Kagan, Rights and the Constitution

The nomination of Elena Kagan to the Supreme Court has once again presented America with the vacuous exercise that is the confirmation hearings. Democrats are lauding praise on the nominee, occasionally in the form of a question while Republicans are asking questions for which no answers are really expected. And thus it has been since Robert Bork was sent packing by such Constitutional giants as Ted Kennedy and Joe Biden.

Today, rather than have Bork’s clarity of opinion we have Elena Kagan explaining to Senator Tom Coburn “I don’t have a view of what are natural rights independent of the Constitution” during a discussion about fundamental “unalienable Rights” as expressed in the Declaration of Independence.

In that one brief statement Elena Kagan has shown the light on exactly what is wrong with the left and the progressives: They fundamentally misunderstand the relationship between the Constitution and the citizens. The Constitution is not the source of our rights. Our rights preceded the Constitution… despite the fact that most governments did not respect them. 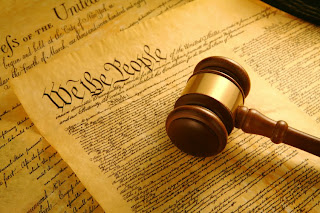 The US Constitution fundamentally does two things. First it gives the three branches of government certain powers as primarily set forth in Articles I, II & III. The second thing it does, and this is largely rooted in the Bill of Rights, is constrain the government in terms of stating what it cannot do to citizens. The Bill of Rights does not confer rights on the citizenry; rather it specifies various rights the citizens have that the government may not encroach upon. Technically, the 6th and 7th Amendments do indeed confer upon citizens a number of rights: speedy trial, trial by jury etc., but these rights are specific in that they are protecting the citizens from government action rather than natural rights such as life, liberty, speech, etc.

Many years ago I heard a comparison between the United States and Mexico as thus: In the United States you have the right to do anything you want unless there is a law against it, while in Mexico you don’t have the right to do anything unless the government says it’s OK. Although from anecdotal evidence it sounds right, in reality I don’t know for certain that the Mexican element of the above statement is true. I do however know that the American part is, or at least was until the progressive cancer started to infect the American body politic early in the 20th Century.

In forming a government and writing our Constitution, the Founding Fathers understood that the citizens were giving to the federal government certain limited powers and giving up similarly limited rights specifically because there are things which are better performed by a federal government than individuals or states – national defense, coin money, patents, etc. Indeed the founding fathers were explicit about both of those factors, enshrining the primacy of individual rights in the 9th Amendment: “The enumeration in the Constitution of certain rights shall not be construed to deny or disparage others retained by the people.” and in the 10th Amendment demonstrating clearly that the federal government was not intended to be the regulatory leviathan that it has become: “The powers not delegated to the United States by the Constitution, nor prohibited by it to the States, are reserved to the States respectively, or to the people.”

To recognize how central these limits were to the founding fathers and the country, one has to know that without the limits imposed by the Bill of Rights, the Constitution would never have been ratified and the United States would never have come into being as we know it.

During the Constitutional Convention of 1787 George Mason, a delegate from Virginia, and often called the Father of the Bill of Rights, fought vociferously for the inclusion of a Bill of Rights in the Constitution. James Madison, the Father of the Constitution, was against including such a bill for two primary reasons. First, he felt that the enumeration of some rights in the document might imply the absence of others, and second, it was his contention that such rights did not need enumeration or protection because the government had not been given the power to usurp them.

On January 9th 1788 the Connecticut legislature ratified the Constitution by a vote of 128 to 40, the fourth state to do so out of the nine necessary for it (the Constitution) to take effect. It was then that the process hit a brick wall of Anti-Federalist opposition in Massachusetts. That opposition took the form of Sam Adams and John Hancock, who thought the Constitution vested too much power in the hands of the central government. Eventually the pair negotiated what became known as the Massachusetts Compromise, an agreement which allowed the state to ratify the Constitution with the explicit condition that the first order of business for Congress was to pass a bill of rights. If Congress failed to do so, the state’s ratification was revoked. Following Massachusetts, four of the next five states to ratify the Constitution incorporated that same language. As such, without the explicit promise of the protections enshrined in the Bill of Rights the Constitution would never have passed.

Which brings us back full circle to Elena Kagan. Later in her testimony she states that “I’m not saying I do not believe there are rights preexisting the Constitution and the laws, but my job as a Justice is to enforce the Constitution and the laws.” That’s the same kind of equivocating we heard when Senator Hatch asked if she had written a document he was holding in his hand: “The document is certainly in my handwriting.” In the above statement Kagan specifically avoids saying she believes “unalienable Rights” exist.

The Founding Fathers never intended for the Constitution to be the source of citizen’s rights. Rather, one of its original, specific purposes was to protect those “unalienable Rights” from an over reaching, tyrannical government. If Elena Kagan doesn't have an understanding about that most basic element of the Constitution, how is she qualified to determine whether or not something is Constitutional in the first place?
Posted by Imperfect America at 3:01 PM