A jobs program for the IRS and the Post Office

This President has said for months that jobs and the economy are his number one priorities. ObamaCare has demonstrated his sincerity... just not in the way we might 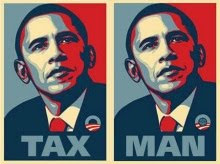 think. While American shores are littered with the carcasses of millions of octopi who sacrificed their lives so that their ink might be used to expound upon the disaster that is ahead, one of the most damaging elements of ObamaCare doesn't have anything to do with healthcare in the first place. It really belongs amongst the 2,300 pages of economic malpractice known as Dodd-Frank. We are of course talking about Section 9006.

What is Section 9006? It is nothing less than a bullet aimed at the foot of the American economy as it competes in the race out of our economic malaise. Up until ObamaCare, businesses were required to provide 1099’s (the miscellaneous income form from the IRS) to individuals who provided them with services (via an other than employee relationship) if the total amount spent was in excess of $600. As such, consultants, freelancers and temporary help are often paid for their services this way. It keeps companies from having to collect and track taxes for short term relationships and it lets individuals who may deal with numerous clients during the year handle their own taxes.

Unfortunately, thanks to Section 9006 of ObamaCare the Dr. Jekyll 1099 we’ve all come to know and love is going to become the Mr. Hyde 1099 that will cause many businessmen to head for the exits. Beginning in 2012, 30 million businesses in the United States will have to begin issuing 1099s as if they were Internet diploma mills sending out bachelor degrees. In addition to everyone they already are required to issue 1099s to, ObamaCare will require them to issue 1099s to every single entity with which they do in excess of $600 in business in the calendar year. Buy a computer at Best Buy? Issue them a 1099. Buy 5 cases of $12 wine from Vinnie’s Wine shop? Issue them a 1099. Pay PG&E $100 a month for electricity? Issue them a 1099. Large companies with internal accounting staffs will be able to add another desk in the department to handle the extra work. Small businesses don’t have that luxury.

Of all of the lunacy that the Democrats have engaged in over the last 18 months, this may well be the most Bellevue worthy. Imagine you are a trucker who drives 2,000 miles a week, stops for gas 3 times a week and spends $200 each time. At the end of the year that trucker will have to go through 150 gas station receipts, find the station matches and figure out at which of those he spent over $600. (Of course it’s not quite as easy as it might sound as some branded gasoline stations are franchises and others are company owned while some companies own stations carrying different brands… but I digress.) Once they navigate through all of that mess, they then have to contact each company, find the correct person and ask for their Federal Tax ID. Then they have to issue to each of those companies a quad form 1099 – One for them to keep, one for the IRS, one for filing with the state and a fourth for any possible local taxes.

And of course this is only for their gas. There are a plethora of other services for which our intrepid trucker may have to issue 1099s. If he spends $25 a week at McDonalds in 15 states, he may have to provide them with a 1099 if half of the stores are company owned. (Good luck keeping track of that…) If he buys two tires from a service store in Mustang, Oklahoma he’ll need to send them a 1099. If he gets a paint job in Bollingbrook, Illinois or a few tune ups in Macon, Georgia he’ll better make sure he gets the Tax IDs.

Unfortunately for many of the tens of millions of small businesses across the country this trucker story is no fantasy. It is reality and they will be feeling the pinch just as badly. A real estate agent who drives 30,000 miles a year and fills up at 5 different gas stations will need to add a new file to her Rolodex. A plumber who buys piping at Home Depot, tools at Sears and work boots for his crew at Wal-Mart will be adding some numbers to his accountant’s check. Then there is the phone company, the office supply store and even their insurance companies. I can’t even get my phone company to figure out what all the fees mean on my bill and now I have to depend on them to provide me with the correct Tax ID information and address information for the IRS under the penalty of jail… for me, not for them. That’s comforting…

As small businesses across the country seek to find their footing and get back on the growth track, the last thing in the world they need is another stream of government regulations that force them to divert their attention from actually running their businesses. This is of course no surprise as it’s just another example of what happens when Americans put people with virtually no private sector experience and who are hostile to capitalism in charge of the government.

The bottom line however is that they are sticking to their word and indeed jobs are priority number one. Unfortunately in this case the jobs belong to the IRS agents who will be ensuring compliance and postal workers who will be delivering the millions of 1099 forms. Now that's change we can believe in...
Posted by Imperfect America at 4:20 PM