Julian Assange should be sent to Guantanamo Bay

Julian Assange doesn’t look like your typical Taliban operative. He’s an Australian born blond haired pasty white guy who looks like he’s quite unfamiliar with the sun. Truth be told, he’s not actually an operative. In all honesty he probably doesn’t like those guys much. Nonetheless, he is working for them as much as if he were on their payroll. 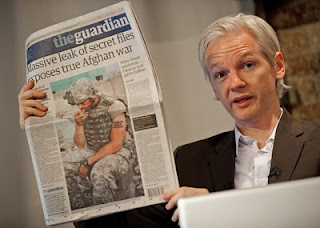 Last week, the website he co-founded, WikiLeaks, released 90,000 pages of secret tactical American military reports in conjunction with the New York Times, Germany’s Der Spiegel and Britain’s Guardian. Despite being historical in nature (7 months old being the most recent) they will do as much harm to American troops and efforts in the region as if he had provided Al Jazeera with the actual coordinates of troop positions currently out in the field. As such, Assange deserves to be declared an enemy combatant and the United States should use every legal tool at its disposal to put their hands on him and try him in a military tribunal. Given that Guantanamo is still open perhaps that would be an appropriate venue.

Assange defends his release of the documents with the accusation that (Defense) “Secretary Gates has overseen the killings of thousands of children and adults in these two countries (Afghanistan and Pakistan)", drawing a moral equivalence between unintended collateral causalities of war and the certain vicious murder of informants at the hands of the Taliban and their Al Qaeda brethren. Lest anyone might miss the connection, Taliban spokesman Zabihullah Mujahid told Britian’s Channel 4 News that they were studying the documents and the names and "If they are US spies, then we know how to punish them." Assange apparently dislikes the killing of innocents, but only the unintended collateral types. Those intentional, premeditated murders by Islamist fascist types he has no problem with and even contributes to.

Channel 4: There is an awful amount of material here that you couldn't have looked through personally. Could it cost lives? Is it putting people in danger publishing this?
Assange: We've gone through the material and reviewed it and looked for cases where innocent informers, ie an old man saying next door there is a Taliban, or what he believes is Taliban, so we've looked for those cases and there's a particular type of report that frequently has that - those have been withheld and also the source says they have done some work in doing this as well. So I think it's unlikely that that will happen. We've worked hard to make sure there's not a significant chance of anybody coming to harm.

So you've actually removed stuff from this leak?
Yes.

Is that a first for Wikileaks?
Sources know when they submit material that we go through a "harm minimisation" process.

That harm minimisation process is not about removing material it's about minimising harm. We have a number of ways to do that. The way we have done it in the past and it's always been effective - notify and delay. Notify the people concerned, and delay the publication as a result. So we have retained some of this material for the harm minimisation process. No, because it's really impossible for us to notify the Afghanis in their villages about this material - we will have to do a redaction of some of it.

Despite Assange’s heroic “harm minimization” efforts, in just two hours the Times of London found dozens of names and villages of Afghanistanis who had provided information to the Americans. As a result of WikiLeaks there are likely hundreds of individual Afghanistanis’ and thousands of their fellow villagers who will be targeted by the Taliban and Al Qaeda. In addition, the Taliban will likely trail many of those informants and use that information to ambush American and coalition troops.

In addition, these leaks will make foreign governments and their intelligence agencies, from Pakistan to Britain and everywhere in between far less likely to share their intelligence with the United States because they are rightly concerned that it might end up on the front page of the New York Times. That withholding of information will cause further deaths as well.

While Assange is the face of this treachery, he is not the only one who should be in the Pentagon’s sights. The New York Times, Der Spiegel and the Guardian should be looked at as well. Not only did they give Assange a far bigger stage than his obscure website might have otherwise provided, they may be complicit in providing actionable information to the Taliban. Although Arthur Sulzberger and Bill Keller should probably have been prosecuted for the Times’ SWIFT banking and domestic wiretapping stories, they will likely escape prosecution here simply because they limited the content they actually published.

Then of course there is the source itself. At first blush it appears as if the primary source for the leaked documents was Bradley E. Manning, an Army private who is being held for the release of the Apache video earlier this year. Manning may have had civilian accomplices and they should share his fate whatever that might be. At this point one might also ask how an E-3 might have put his hands on so much highly sensitive information.

In the modern world of moral relativism, where the peace-loving left has no problem betraying American secrets and putting bull’s-eyes on the backs of Afghanistanis who simply seek to rid their country of the Islamo fascists in their midst, this is a rare moment of clarity. There will likely be American and Afghanistani blood shed as a result of these WikiLeaks actions. Julian Assange, Private Manning and their enablers should be held accountable for their actions and should pay whatever price is appropriate. We can’t unring the 90,000 page bell they’ve rung, but hopefully their punishments will provide sufficient disincentive that others decide not to follow their lead.
Posted by Imperfect America at 1:39 PM